When is the Next Boil Water Alert?

By Frank A. Brigano, Ph.D. and Thomas A. Burke 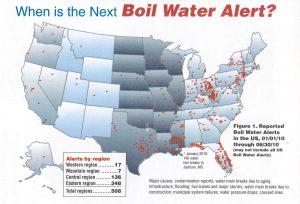 A common theme we see on a daily basis relates to drinking water infrastructure. We track news throughout the world that impacts the drinking water industry, and one of the most frequent things we see are notices from agencies and organizations about the need for communities to boil water in order to combat possible contamination. In some parts of the world, boiling water is the norm due to water supply issues. Often, these areas may be limited in their ability to develop economically, as clean water is such an integral part of daily life. It is in the developed world, however, where we have been seeing a large increase in the number of such notices.

In May, an alert in the Boston, MA metropolitan region impacted over two million customers and lasted from May 1-4. It was caused when a 10-foot-wide steel pipe burst at a seam, which allowed over eight million gallons of water per hour to flow into the Charles River. In addition to consumers, several businesses, offices and universities in the region were severely impacted. Over 800 tests were conducted to verify the water in the region was safe to drink before the alert was lifted. Figure 1 shows a map of 508 reported Boil Water Alerts for the first six months of this year in the US, which we tracked from on-line news and reporting sources. Of special note, in January, Jackson, MS reported over 140 water line breaks, as cold weather took a severe toll on the city’s drinking water infrastructure.

Here in the United States, major causes of Boil Water Alerts over the past few years have been due to reports of contamination, water main breaks due to aging infrastructure or construction accidents, flooding, hurricanes and major storms, municipal system failures and crossed lines. When a drinking water pipe develops a leak or is broken, the possibility of contamination arises as decreased water pressure may allow non-treated water to enter the distribution system. Storms and flooding may result in non-treated water rushing over wells and possibly entering well systems; such was the case on April 1 when Mansfield (Connecticut) Middle School’s water tested positive for coliform bacteria after the school’s well house flooded as the result of several days of heavy rain. 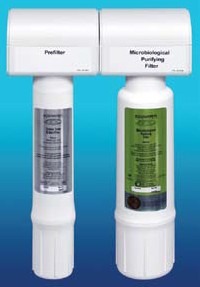 Some state and local communities may utilize news reporting venues that result in higher representation compared to other states and communities whose alerts are not picked up by on-line news sources. The map displayed in Figure 1 most likely under- represents the total number of alerts due to reporting variances. Several communities have invested in phone-caller programs or other technologies such as e-mail alerts to inform residents about local emergencies and conditions. Many communities, however, do not have the resources to develop such reporting systems and must rely on posted notices, word-of-mouth, or local news organizations to make such announcements. Even with the best reporting technologies, there are bound to be several residents who might not receive these notices, putting them at risk of consuming what may possibly be contaminated water.

Beyond the plethora of causes, there may also be a time delay for the Boil Water Alerts after the first indication of possible contamination, in part due to the lack of comprehensive, system-wide reporting methods to reach all customers. In this case, delay is often critical for consumers who are young, elderly, ill or who have compromised immune systems and may be especially susceptible to illness from drinking water contaminants. Additionally, Boil Water Alerts are somewhat limited in scope; for example, they are not able to address certain chemical contaminants, which may impact municipal or private well drinking water sources, as boiling water may not reduce that type of contamination. In fact, it may concentrate the contamination or create vapors that further expose consumers to chemical contaminants.

Thus, the issue is for customers on municipal systems or wells, and whether they need to provide additional contaminant reduction filtration beyond relatively common chlorine taste and odor reduction. In some communities, drinking water supply infrastructure may approach 100 years in age, which may be long after the expected life of the infrastructure in place. In communities with newer infrastructure, the issue might be delays in reporting, such as in 2008 when water containing the chemical Trichloroethylene (TCE), an industrial solvent that is suspected of causing cancer, was accidentally released into the water supply of nearly 5,000 Arizona American customers in Paradise Valley and Scottsdale. Imagine yourself as one of those customers, drinking a glass of water, and then turning on the news only to watch a broadcast that says your water may be contaminated with that chemical.

In rare instances, customers are not informed of possible contamination issues and only learn about them long after the fact. Such an instance was reported in Crestwood, IL, where from 1986 to 2007, the Illinois EPA believes Crestwood was using water from its contaminated groundwater well to supplement its Lake Michigan source water, without informing the Illinois EPA or its water customers. The contaminants in this case were dry-cleaning solvents: perchloroethylene (PCE), a solvent linked to cancer, liver damage and neurological problems, and vinyl chloride, a known human carcinogen. Needless to say, such situations are thankfully rare; that it actually occurred, however, leaves cause for concern.

Customers of a municipal drinking water systems, or private well owners, might want to consider whether it makes sense to have a certified filtration system, in case they are not made aware of a Boil Water Alert in time to take action. Such a filtration system might also be certified to reduce other contaminants, such as volatile organic chemicals (VOCs), similar to TCE and PCE as noted above.

The system’s carbon block has similar technology to other carbon block systems that have been certified by the state of California that meet US EPA/California requirements for fail-safe mechanism. The system includes a patented fail-safe shutoff mechanism ensuring no microbiologically contaminated water ever passes through the system. By comparison, hollow-fiber technology is not able to meet this shutoff requirement—if one of the fibers is broken, consumers will not know if they are receiving contaminated water.

Conclusion
Drinking water infrastructure plays a major role in community development and has been instrumental in providing safe drinking water supplies for generations of communities. As with any other type of machine, structure or man-made item, drinking water infrastructure is subject to deterioration, accidents, wear and tear, natural disasters and operator error. Customers receiving drinking water from municipal systems or using their own private well need to determine whether additional filtration or treatment at the point of entry or at the point of use is necessary. Knowing that Boil Water Alerts are issued after actual contamination (or even just the possibility of contamination) might be a strong incentive for people who would not want to ingest suspect water. Getting this message to these customers so they can make an informed decision is key, rather than waiting for the next alert that may impact their drinking water supply.

Thomas A. Burke is Product/Marketing Manager for KX Technologies LLC. Burke can be reached at (203) 764-2512 or by e-mail at [email protected] com.