Rules That Are NOT Made To Be Broken

By Tom Palkon and Andrew Warnes 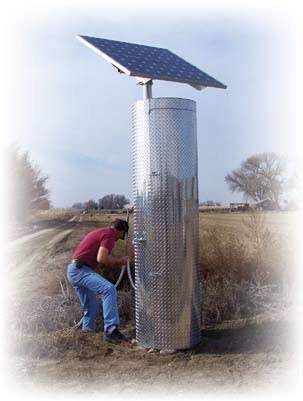 A solar-powered, small PWS recently certified to EPA Purifier
A ‘first of its kind’ certification could herald a breakthrough in small public water systems and drinking water compliance markets. In May 2010, the WQA Laboratory used data transfer protocols to certify a series of small, packaged public water systems (PWS) for the first time to US EPA’s Microbiological Purifier Guide Standard and Test Protocol (EPA Purifier). Using the existing microbiological certifications of ultrafiltration systems, a small, packaged systems integrator was able to transfer those certifications to its line of prefabricated PWS systems.

The systems, built around specific UF modules, are themselves now able to claim independent certification. The data transfer process itself was quick, relatively simple and inexpensive. The package system integrator can now go to market with EPA Purifier claims of its own for a variety of derived products. This is the first time the authors are aware of complete PWSs being certified to this US EPA guide. The process of certifying a PWS system to EPA Purifier by a systems integrator is noteworthy in its occurrence, the ease by which it was done, and the opportunity to streamline regulatory acceptance procedures it presents.

A novel use for an existing test protocol
Owners and operators of public water systems in the US are subject to a myriad of performance-based requirements and regulations devised to ensure public health and prevent waterborne illness. Smaller PWSs carry the additional burden of having to meet these regulatory scenarios despite tight bud- gets, limited on-site expertise and locations in remote areas. In order to install or upgrade a small PWS to meet state or federal performance requirements, an owner or operator cannot easily pick and choose between equipment based upon technology, performance or cost. Today, a small PWS has to meet the minimum requirements laid out by the US EPA, as well as any additional requirements stipulated by various state and local regulators. US EPA guidelines are the baseline, and other requirements are in addition to these. The end result has been a complex and ultimately costly process by which manufacturers of PWSs or components must submit their products for testing and acceptance state-by-state and sometimes locality-by-locality. What if there was a way for manufacturers to obtain advance certification for key US EPA and state regulatory requirements for key performance parameters? Surely owners and operators (particularly those of smaller PWSs) as well as manufacturers could benefit if there was a way to submit systems to an accredited laboratory for independent testing to parameters that could be universally accepted by many state and regulatory agencies. Such a process could reduce the administrative burdens of regulators, speed better technologies to market and enhance the options available to PWS owners and operators.

Giardia lamblia (above) and Cryptosporidium oocysts (below) courtesy of H.D.A. Lindquist, US EPA

Rules are rules
For a small PWS, the microbiological (bacteria, virus and cyst) reduction requirements incorporated into federal, state and local regulations are often the most complex, costly and data-reporting driven regulations to which a system must comply. There are many other contaminants that a PWS may need to ad- dress, though few have the virtually universal presence of microbiological contaminants, and fewer still have the ability to threaten as many lives in a relatively short span of time. For these reasons and many others, the regulations guiding PWS microbiological compliance are numerous.

The Surface Water Treatment Rule (SWT) was initiated in 1989 and addresses filtration and disinfection requirements for contaminants like Legionella, Giardia Lamblia and viruses in surface water sources. The Total Coliform Rule was initiated one day after the SWT and established monitoring and reporting requirements, as well as limits, for the presence of total coliforms in public water supplies. These were followed by the Phase II Rule in 1991 and the Phase V Rule in 1992, which established monitoring and re- porting requirements and limits for inorganic, volatile organic and synthetic organic contaminants in PWS supplies.

Each of these rules (and others not mentioned here) came into being as scientific knowledge and technology evolved in ways that could be used to improve the nation’s public water supplies. These rules are ’living legislation‘ in the sense that they will be enhanced and improved upon over time. As new risks are discovered and old risks are better understood, the rules will change to reflect them. Owners and operators of large public water systems often have compliance personnel on staff to understand, interpret and ensure compliance with legislation well before it becomes mandatory. Owners and operators of small systems often do not have the resources to be able to ensure up-to-the-minute knowledge and compliance. This has been an issue that many regulatory agencies have sought to address via education and outreach, and remains an issue each time new legislation is enacted. 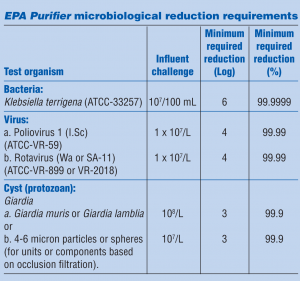 What’s in it for everyone?
From 1984 to 1986, a unique task force was assembled to draft a basic framework for the testing and evaluation of microbiological water purifiers. Expertise was contributed by academics, regulators, manufacturers, researchers, government agencies and enforcement bodies. Their intent was to develop a guide for the acceptance of water treatment units for compliance with Safe Drinking Water Act requirements, where such units might be needed to treat a contaminated public water supply or for use in emergency situations. The group also developed a testing guide for manufacturers wishing to have their products considered as microbiological water purifiers. After review and comment by many parties, EPA Purifier was published in 1987. Since then, the protocol has never been adopted as an official or mandatory standard in any jurisdiction, but has become the de facto baseline standard and protocol for testing the efficacy of microbiological purification devices, and has set the general logarithmic reduction parameters for bacteria, virus and cyst that regulators cite as needed in a microbiological purification device. One of the best aspects of this standard is that it was written in a manner that anticipated the development of new disinfection technologies, and did not restrict its guidance to only technologies that existed at the time it was written. Much like the US Constitution has been effective for more than 200 years because it set out to establish basic truths and could be modified as needed by future generations; EPA Purifier was conceived in a similar manner. It is interesting to note that at the time it was written, it was unlikely that any single device or technology available at the time would have been able to comply with it.

Conclusion
The number of devices being tested and certified to EPA Purifier today is growing rapidly. Despite significant time and resources dedicated to updating and possibly improving upon EPA Purifier and its provisions, no group has yet been able to do so. It remains the most recognized, cited and accepted ‘non- official’ and ’non-mandatory’ guide standard and test protocol on record.

What EPA Purifier and the first independent third-party testing and certification of a small PWS brings to the small PWS market is the opportunity for state and local regulators to finally receive independent microbiological performance data for a packaged PWS prior to design, piloting or implementation. No independent certification could ever remove the need for all regulatory oversight and verification, but such a certification can reduce the risk and increase the ease with which technology is accepted. Much like ANSI/NSF Standards 60 and 61 have become ubiquitous to facilitate and ensure compliance with materials and extractables regulations, independent third-party testing and certification of systems to EPA Purifier can be used to facilitate and ensure compliance with numerous microbiological treatment regulations.

About the authors
Thomas P. Palkon, Director of Product Certification for the Water Quality Association, has managed and operated WQA’s Laboratory, Facility Assessment and Certification Departments for the past decade. He holds a Bachelor of Science Degree from the University of Illinois (Champaign-Urbana) and a Master of Business Administration with Distinction from the Keller Graduate School of Management. He can be contacted at (630) 505-0160 or tpalkon@wqa.org.

Andrew Warnes, former Senior Product Manager for PRF (a GE/ Pentair joint venture) received his Bachelor of Science Degree in national security policy from Ohio State University, and is a former US Army Special Operations Team Chief. His areas of expertise include membrane applications for microbiological purification and regulatory compliance. Warnes is a former International Director of the WQA and serves as a member of the WC&P Technical Review Committee. He can be contacted at (847) 274-0595 or awarnes@comcast.net.

About the product
The UF module from which data was transferred to complete packaged PWSs is the GE Homespring™ UF211 system. To enquire about transferring GE Homespring performance data to an integrated system, please go to www.homespring.com. The packaged PWS integrator that was the first to receive EPA Purifier certifications for a line of PWSs is Innovative Water Technologies of Rocky Ford, CO.

To review the list of their recently certified systems, please go to http://www.wqa.org/goldseal/detail.cfm?tableDefID=14&companyID=642 or visit the company website at www.innovativeh2o.com. One of the actual systems (a Sunspring solar powered version) that has been tested and certified to EPA Purifier was on display in the GE Water & Process Technologies booth at the AWWA’s ACE10 June 20-24, in Chicago, IL.

To enquire about the process by which certifications data can be transferred from the GE Homespring UF211 system to other integrated systems, or to ask about product testing and certification to EPA Purifier protocol in general, please contact the WQA Laboratory at (630) 505-0160 or go to www.wqa.org.