Watts Water Quality Products has expanded its engineering department to better support the commercial market. Watts designs and manufactures commercial and light industrial systems, water softeners, iron filtration and more, including FRP softeners and filters up to 63 inches (160.02 cm) diameter, steel tank softeners and filters up to 72 inches (182.88 cm) diameter (and beyond), pre-plumbed and skid-mounted filters and softeners up to 48-inch (121.92-cm) duplex, RO systems up to 120 gpm (454.25 L/m) permeate and PET skids. Systems are manufactured in the US using only top-quality components for quality assurance.?

The Pacific Water Quality Association’s 53rd Annual Convention and Trade Show, scheduled for September 14-17 in Irvine, CA, will feature a golf tournament, networking sessions, WQA fundamentals review and exams, industry and salinity updates, education seminars, a banquet and awards dinner and the ever-popular auction. For registration information, contact the association at info@pwqa.org or (760) 644-7348.?

2010 marks the 25th year in business for John Guest® USA, Inc., the North American sales and distribution operation of John Guest Ltd. The company operates a 46,541-sq.-ft. facility housing administration, operations and warehousing, and employs 36. It supplies over 1,000 SKUs to industrial plumbing, retail and OEM customers across North America, Canada, Mexico, Central and South American and the Caribbean.?

In an exclusive North American distribution agreement, Fi-Streem Inter- national Ltd. granted LabStrong Corp. the exclusive right to sell all Fi-Streem distillation systems and other Fi-Streem units and parts. The new partnership will help bring LabStrong into a position to sell its products to new customers and provide them with the best customer service in the lab equipment industry. Currently, Fi-Streem offers a wide-ranging array of products including those used for distillation, deionization and reverse osmosis.

NSF International announced that Charlotte Pipe and Foundry Company’s RePVC (polyvinyl chloride) and ReUze can now be added to the company’s list of certified products. Both piping systems were inspired by the green and sustainability industries. NSF’s certification for water piping systems verifies the products meet all applicable requirements by conducting thorough testing and facility inspections. This includes three unannounced inspections annually, formulation and manufacturing process reviews and testing of product samples. RePVC is one of the first products to be certified by NSF International to ASTM F 1760: Standard Specification for Coextruded Poly(Vinyl Chloride) (PVC) Non-Pressure Plastic Pipe Having Reprocessed-Recycled Content. The Standard contains requirements for plastic pipe having recycled content.

The spring meeting of the ASTM International D-28 Activated Carbon Committee, presided over by new Vice Chairman Robert Potwora of Carbon Resources, was held April 19 in St. Louis, MO. There were several attendees representing the manufacturing side and end users of activated carbon, as well as new affiliates. A web-based teleconference was held for members who could not attend. Several items regarding long- and short-term projects were covered, including the need for a precision and bias statement for the pH test method. Carbon Resources will participate in an inter-laboratory study to generate this data. The next regular meeting is scheduled for October 11 in San Antonio, TX. There will be more discussion on refining definitions and a review of potential university studies.

Worrell Water Technologies’ Living Machine® ecological wastewater treatment and recycling system was selected as a project under the Environmental Security Technology Certification Program (ESTCP) to demonstrate and validate its use and benefits for on-site recycling of wastewater. ESTCP is a Department of Defense (DoD) program that promotes innovative, cost-effective environmental technologies through demonstration and validation at DoD sites. The project is in partnership with the Naval Facilities Engineering Service Center, which will be in charge of overall project management.

Three Marquette University research projects were among seven chosen to receive funding by the industry members of the National Science Foundation’s Industry/University Cooperative Research Center (I/UCRC) on water technology, in conjunction with UW-Milwaukee. The goal of the new center is to spur local economic growth by combining the engineering research expertise at Marquette and UWM with industry needs involving water equipment, policy and technology. In March, the National Science Foundation awarded the two universities a total of $675,000 (USD) over five years to form the I/UCRC in Milwaukee. It is one of about 55 such NSF centers in the country, and one of only two that focus on freshwater issues. The Milwaukee Water Council helped to recruit six local companies: A.O. Smith Corporation, Badger Meter Inc., Pentair Inc., Baker Manufacturing Company LLC, Wisconsin Water Research Corp. and the Milwaukee Metropolitan Sewerage District. Each contributes $50,000 (USD) annually for membership.

Best-selling author Steven Solomon and ‘natural capitalism’ advocate Hunter Lovins will be keynote speakers at the third WaterSmart Innovations Conference and Exposition, slated for October 6-8 at the South Point Hotel and Conference Center in Las Vegas, NV. Lovins, President and Founder of Natural Capitalism Solutions and co-Founder of the Rocky Mountain Institute and California Conservation Society, will keynote the opening session Wednesday, October 6. Solomon, author of the best-selling book Water: The Epic Struggle for Wealth, Power and Civilization, will keynote the conference’s luncheon on Thursday, October 7. For more conference information and to register, visit www.WaterSmartInnovations.com.

Everpure has been awarded a 2010 Best of KBIS (Kitchen & Bath Industry Show) product award in the green/ sustainability category. The ViruPure™ commercial-grade system won, due to its ability to filter even the smallest possible viruses from drinking water. The system removes more than 99 percent of viruses, bacteria and cysts and reduces VOCs, chlorine, chloramines, lead and other harmful contaminants. It was selected by a group of top-notch industry profes- sionals, including certified kitchen and bath designers, remodelers and specifiers. Awards were given based on a high ranking in five key areas including: func- tionality, quality/durability, flexibility, aesthetics/style and innovation.

In its ‘Seeing is Believing’ campaign, Next-RO announced the Next RO engine is now available to professional water conditioning professionals (domestically and abroad) for under-counter installations. The system, which can easily be converted from countertop to under-counter and vice-versa, opens a new channel to dealers: it’s the first home RO unit that can also be placed in office service. The company’s introductory offer includes a discount price of $175 per unit. 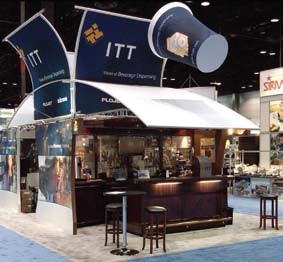 ITT Corporation recently demonstrated a full line of ITT beverage pumps and beverage dispensing equipment at the National Restaurant Association (NRA) show. The booth was designed to emulate both a tavern serving beer and a convenience store serving frozen beverages, iced tea, juice, soda and coffee. In the middle, was a full backroom setup where all of the products were working in actual configurations for ease of demonstration. These pumps and beverage dispensing equipment are a result of ITT’s close collaboration with its customers to provide application-specific products.

Printpack’s Colorpack™ prepress separation method was selected by Next Foods in support of the launch of its new line of fruit-based probiotic Good Belly Splash beverages. Color ink targets, refined for both flexo and gravure applications, maximized the achievable color gamut. The system was further complimented by an accurate proof-to- production run correlation that effectively managed color expectations.

The Canadian Institute of Plumbing and Heating (CIPH) reported that traffic for its MEET 2010 Tradeshow was up over 2008, with 5,514 industry members attending the two-day show. Close to 500 people attended the sold-out Industry Dinner, featuring comedian and ventriloquist Mike Robinson. Exhibitors from across Canada and the US displayed new products and equipment for the mechanical and electrical industries. Visitors to the show commented on the diverse and high-quality products that were showcased.

Two grants totaling $8,350 (USD) have been awarded to help build fresh drinking water wells in Haiti, the National Ground Water Research and Educational Foundation (NGWREF) announced. Ac- cording to Red Cross estimates, three mil- lion people were affected by the January 12 earthquake. The Haitian government reported that an estimated 230,000 people died, 300,000 were injured and 1,000,000 became homeless. One of the most immediate health threats from the earthquake was a major disruption of fresh drinking water supplies. NGWREF made a $6,000 (USD) grant to the ClearBlue Project for the construction of potable water well systems. The second grant, $2,350, was made to Hands on the World Global Inc. for the construction of potable water well systems in Jeremie, Haiti. ClearBlue evolved from the First Methodist Church of North America. Hands on the World Global was formed to provide the basic needs of water and food for the security of people in developing countries and those who suffer from the aftermath of conflict or disaster.

Nitron Ltd., Israel’s largest private water treatment company, has developed a cutting-edge technology to remove nitrates and deliver quality drinking water by using selective electrodialysis (SED)—a unique technology that is based on electrodialysis, not yet available in the US. SED uses an electrical process to separate nitrates selectively from the water and concentrate it in separate cells. It replaces traditional technologies such as RO or ion exchange with a simple, cost-effective and energy-efficient process with little maintenance and operating costs. Nitron’s SED uses clean technology to extract nitrate from the water system, while using less energy and less chemicals with a high recovery rate (95 percent) of water that can be used.

Amiad Filtration Systems announced that its ABF series pre-treatment filters are a key component of the now fully operational Changi NEWater Plant, Sin- gapore’s fifth and largest NEWater plant. The Changi plant has a total production of 228,000 m3/day. Amiad provided 11 top- of-the-line ABF 15,000 filtration systems to the plant, which began its first phase in May 2009 with a production capacity of 69,000 m3/day. Amiad was selected for the Changi plant based on its unique filter design, self-cleaning capabilities and proven operation in the first NEWater plant in Singapore, which began opera- tion in 2000. Now fully operational, the Changai plant is expected to supply nearly 15 percent of Singapore’s water needs. When added to the other four NEWater plants, this number rises to 30 percent of Singapore’s current water requirement.