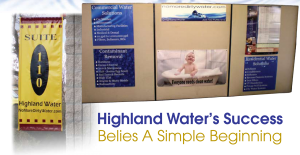 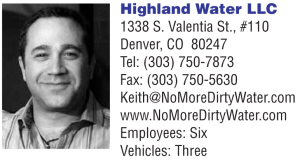 When it was started in 1997, Highland Water (named after the Scottish Highlands) focused on large-format (three- and five-gallon) bottled water delivery, POU water coolers and office coffee services in predominantly commercial markets. The company grew to become approximately the fifth largest provider in the state, with over 1,000 accounts, including notables such as FedEx, Kinko’s, Office Depot, Circuit City and many other national, regional and local companies.

Highland Water LLC is now an investor-owned company. Keith Warner, the majority stockholder and President, chose his path carefully. “I met a very flamboyant Scotsman at a trade show restaurant in Chicago, IL,” said Warner. “He owned Highland Water and I was representing another company in which I was a partner. He convinced me that the water industry was the way to go and the opportunities were virtually limitless. My follow-up research into the industry, in particular the potential in Colorado, reinforced his claims.” 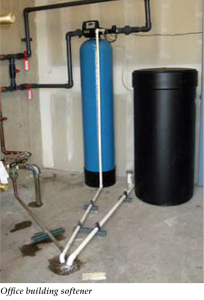 Warner and a group of private investors purchased the company in 2004 and a new POE water treatment division was launched the next year. A dealership agreement was created with GE Water & Process Technologies to represent the AvantaPure line of products throughout Colorado around the same time. The company’s 2006 ‘Men In Kilts Deliver’ promotional program included delivery, service and installation of water services and equipment by a staff that donned complete Scottish theme uniforms. They received extraordinary media coverage that literally covered the globe, resulting in calls from as far away as Australia and Europe from individuals wanting to work for Highland Water—so they could wear their kilts everyday! The following year, the company grew 31 percent. 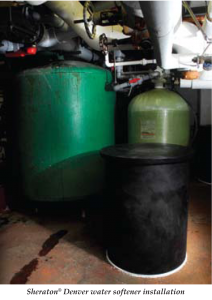 From small to large
Highlands’s POE division grew rapidly and became a significant portion of its business. At that point, EcoWater System was added as primary POE supplier. Growth continued through 2007, at which time the larger divisions of the company (bottled water, POU coolers and office coffee services) were sold to Culligan, so the company could focus solely on the POE division. Since then, Highland Water has experienced significant growth. The crowning jewel was the successful installation of the largest-in-Colorado water softening system (by an independent water treatment dealer) at the Sheraton® Denver Downtown Hotel (see WC&P May). In addition, Highland Water has also completed installations of large RO, ultrafiltration, disinfection and oxidation systems, and completed sales and installations as far away as Wyoming. 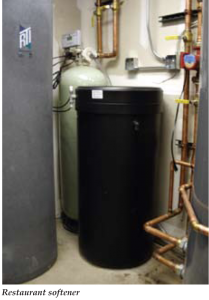 Six team members, including Warner, serve all of Colorado. Highland offers an extensive line of products, including softeners and refiners; filtration systems, including ultra and nanofiltration; ozone, UV and RO systems and just about every other variation that could possibly be required to treat any water impurity or contamination issue. The company’s specialty is ozone oxidation for H2S, iron, manganese and sulfur. It excels in high-purity RO systems within the commercial marketplace. “While we enjoy working with residential consumers, we find commercial applications to be much more interesting and challenging. 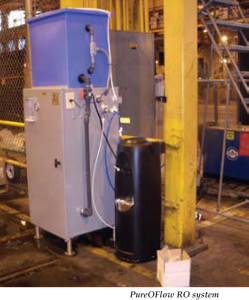 We are also in the process of developing some unique treatment systems and hope to expand our product line with various solutions to address some of the harder water treatment issues. We are always looking for new technologies and are in ongoing discussions with many of the larger manufacturers to add their products.” The company will be adding several commercial-only field sales representatives, an inside sales rep and a commercial systems installer in 2010.

“One of our most distinguishing features is that we are a chemical-free solutions provider,” Warner explained. “Other than salt-based ion-exchange and anion-exchange systems, we focus on water treatment without adding chemicals. We have never sold a liquid chlorine system, we don’t use potassium permanganate/greensand systems and we don’t use peroxide oxidation systems. Our approach to the business is, perhaps, unique in that we do not consider Highland Water to be a product company but rather a solutions provider. We focus on the chemistry of the water to be treated and match the proper solution to the impurity removal desired and/or required. Chemistry is everything for us and we seek to provide the right solution the first time. This approach has helped us to build a base of satisfied and loyal customers who trust that we can fix their water problem correctly. As a general rule, the population throughout Colorado has the misperception that our water is perfect in this state. After all, Colorado is the land of pure, clean, fresh Rocky Mountain water that has been promoted for many years by beer manufactures and many other organizations. The truth, however, is that we face many water impurity and contaminant challenges similar to those throughout the US. For us, the biggest challenge is being able to educate the consumer population (both residential and commercial) without being interpreted as self-serving, fear promoters. Fortunately the awareness of the challenges that we all face with water is increasing and we are benefitting from this result naturally.” 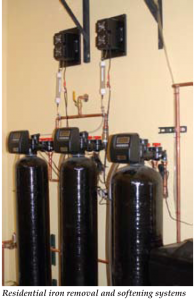 Warner noted that California’s recent salt-ban legislation is a ‘shot across the bow’ for the entire water treatment industry. “I believe that this legislation will slowly move eastward over the coming decade and continue to challenge acceptance of traditional ion-exchange softening. Accordingly, I expect to see more salt-free softening alternatives enter the marketplace, but I expect that few will actually deliver upon the theoretical solutions they promise. When someone comes up with an effective alternative to ionexchange water softening that proves to be effective in rigorous third-party testing, then there will likely be a major (positive) shift within our industry. I also believe that water use and awareness of our compromised water supplies, particularly in the drought-prone areas of the US, will become an even hotter topic in this country. We’ve enjoyed a comparatively plentiful and relatively clean supply of water compared to most other parts of the world. Based on this, it will be critical that water treatment companies deliver low-waste alternatives and, whenever possible, chemical-free treatment solutions. 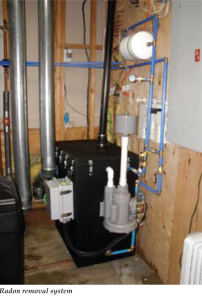 “Since entering the industry, my opinions about the need for water treatment on all levels (commercial, industrial, residential) have certainly been validated,” Warner continued.” I believe that our growing population, combined with the ever-strained water delivery infrastructure and the increasing number of recognized contaminants in water, will continue to bode well for growth in all areas of our industry. Because of this, I am studying to attain my small systems operator’s license as well as advance my water chemistry education through ongoing training in water contaminants and other relevant areas that affect our business.”

More expansion planned
“The next five years will be very interesting in the water treatment industry, and we look forward to always being on the cutting-edge of solutions that we provide,” Warner said. “We plan to expand our reach in Colorado and throughout other areas of the country, either directly or through the development of joint-venture partnerships with other water treatment experts.”

Highland Water recently created a joint-venture partnership with Surburban Water Technology of Philadelphia (and its Florida branch) to expand its reach nationally. They are currently working on a project in northern Florida and have various opportunities within several other states, including New York, California, Indiana and Oregon.