The City of McCook is a quiet little town of about 8,000 located in the far western portion of Nebraska. Old fashioned in many respects, it has a website. Among the claims to fame on that site are the listing of several citations and complaints from the US Attorney General, the US EPA, the Nebraska Department of Environmental Quality and the Nebraska Attorney General, detailing numerous water quality violations. McCook serves its residents with nine wells and a demand of 2.4 million gallons (9.08 million liters) of drinking water per day, drawn from the large aquifer just beneath its streets. Having been aware of the problems since 1991 but unable to comply, McCook had accumulated $225,000 (USD) in fines, and built up a potential in penalties of over $45 million due to non-compliance in fulfilling a consent decree handed down in 1998, mandating they clean up their water.1 This little town’s water supply was over the limit on nitrates, arsenic and uranium; the cost to fix it was overwhelming their bank account.

McCook officials first tried finding new water from an adjacent aquifer. Although test wells were productive, this new source proved iffy when it was revealed that the entire region was high in nitrates, and there were no guarantees that a new well would solve their problem. They fiddled for seven years with futile efforts to find new water until the US EPA intervened in 2003 and ordered that the problem be fixed quickly to avoid heavy fines. The city decided their only option was to fix the existing water supply. They were given a deadline of just over two years. In 2004, the city hired an engineering consultant to meet that deadline.

McCook initially considered six technologies: electrodialysis reversal (EDR), coagulation-aided membrane filtration, enhanced lime softening, iron-based media adsorption, RO and ion exchange (IX). One by one, technologies were eliminated for reasons of cost, footprint or non-applicable technology, leaving only RO and IX as viable options. These were the only two with a proven history of the ability to remove all three contaminants. IX was then selected because of less wastewater generation (50 percent of the RO production would have been waste) and lower overall operating and capital costs The problem became one of finding an ion exchange system that could remove all three contaminants simultaneously in a single system. To complicate matters, it was discovered that the average feed water from existing wells contained three ppm of TOC, which would be prone to fouling any anion exchange system considered for use!

Pilot study proved successful
A separate contract for a pilot study late in 2004 help set up specifications for the final plant design. Based on the response and history, a major manufacturer was selected as the resin supplier. Most of the pilot study was conducted on a computer simulation of the feed water. Using a single media for the simultaneous removal of three different species required fairly exacting projections of breakthrough sequences and tight control due to seasonal fluctuations anticipated, in order to set controls over the blending of unfiltered raw water with the filtered water. The target was to blend to an average of < 8 ppb As, < 8 ppm NO3-N and < 24 ppb U. The pilot was successful and the project went to bid.

The construction of the new IX plant began in April 2005 and began operating in February 2006, a month ahead of the tight schedule set by US EPA. The $12.3-million treatment facility was designed for 6.8 mgd (25.7 million L/d) of drinking water and has a six-million-gallon (22-million-liter) storage capacity to help level out the seasonal variations (to allow for full-treatment needs and blending to the higher total capacity seasonally). Due to an unanticipated increase in water consumption, which generated new revenues, no new rate increases were necessary to cover the cost of funding.3 Waste generated from the IX plant amounted to approximately 2.6 percent of the water produced. Waste disposal was planned for a deep injection well to be located near the site.

New plant online and working flawlessly
After more than four years of operation, the plant has worked flawlessly, according to Jesse Dutcher, McCook Utility Director. “We are in compliance for all three contaminants and the decree was lifted in October 2006, after only eight months of operation.”

The new IX plant treats about half of the total water supply, which is then blended back with raw water before storage and distribution. Regular on-site monitoring has shown that the city has been in compliance since the first month of operation. The IX plant consists of six vessels of strong acid cation used to soften the 420-ppm hard water that is back-blended to an average of 10 grains hardness (170 ppm), and then six anion vessels to address the arsenic, nitrate and uranium. Each cation vessel contains over 700 cubic feet of strong acid resin regenerated with five pounds per cubic feet of NaCl. Each anion vessel contains 460 cubic feet of a blend of 15-percent strong base acrylic (for TOC reduction and prevention of fouling), and screened to function as a top dressing, and 85 percent Type II strong base anion. The anion is regenerated with 7.5 pounds per cubic feet of NaCl. TOC is reduced to < 0.5 ppm. As flow demand increases and decreases, pairs of strong acid cation and strong base anion (SAC/SBA) resins are put on or taken offline as needed. Brine is taken from two salt pits located outside the plant. 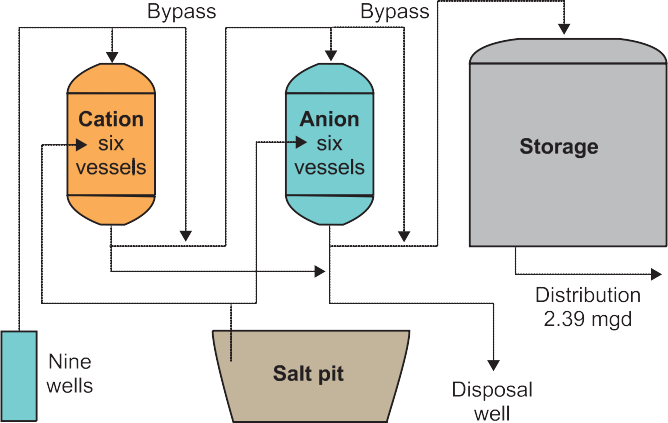 In review
The pilot study for the above plant used 10-cubic-foot vessels and the study translated very well to a system nearly 400 times that size. Likewise, the information is translatable to a system 1/10th that size and, therefore, applicable to residential needs. Start with a good water analysis. In this day of computers, remember GIGO (garbage in, garbage out). Don’t guess.

Conclusions
Ion exchange is a useful tool in the remediation of problematic waters. While the capital equipment costs must be based on total water flow rate, the operating costs are based only on what is removed from the stream. In this case, since the levels of contaminant removal were small and allowed for generous blending of the filtered and raw water, ion exchange turned out to be the best choice. Ion exchangers can provide multiple contaminant removal functions, but keep equilibrium in mind. Each contaminant has a different selectivity for each resin, and a different breakpoint. Careful engineering and system piloting is a must when treating for long-term, health-related contaminant reduction.

About the companies and key players
Purolite Company of Bala Cynwyd, PA supplied the resin and several specialists for this project, including Francis Boodoo, Design Engineer and Gary Schreiber, Job Coordinator. Tonka Equipment, Plymouth, MN, supplied the equipment. Jacobson Helgoth, Lakewood, CO, was the architectural engineer on the project, while McCook’s Jesse Dutcher was the Facilities Operator.

C.F. ‘Chubb’ Michaud, CE, CWS-VI, is CEO and Technical Director of Systematic Company, which he founded in 1982. He serves on the Pacific Water Quality Association’s Board of Directors (since 2001) and chairs its Technical Committee. Michaud has also been a member of the Water Quality As- sociation’s Board of Directors as well as past Chair of the Commercial/Industrial Section. A founding member of WC&P’s Technical Review Committee, he has authored or presented over 100 technical publications and papers. Michaud can be reached at Systematix, Inc., 6902 Aragon Circle, Buena Park, CA 90620; telephone (714) 522-5453 or via email, cmichaud@systematixUSA.com.