The objectives of this case history are to provide the reader with an overview of the evaluation of a failed water softening system and both the rationale for, and subsequent installation of, a new system for one of the largest hotels in Denver, Colorado. The conclusions drawn from this case study are consistent with the rationale for the replacement of nearly all obsolete water treatment systems. In addition, the installation of equipment in first-time treatment scenarios will benefit from the assessment methodology provided herein. For example, facilities that can benefit from softened water, such as hotels, motels and nursing homes, can assess equipment and the associated return on investment (ROI) by looking at similar considerations to those presented in this case study. Restaurants needing scale-free water and manufacturers requiring low TDS process water may rely on the approach shown here to quantify the benefits of adding water treatment equipment. And finally, nearly all commercial water users may assess the qualitative benefits of various systems, based on those shown below. 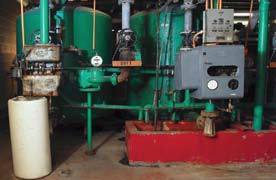 Background
In November 2008, the new owners of the hotel contacted a local water treatment dealer to provide an assessment of the facility’s water softening treatment systems. Despite having extensive commercial experience, including systems provided to restaurants, manufacturing facilities and medical facilities, the local dealer did not have over two-inch (5.08 cm) pipe-installation experience (i.e., big pipe) with commercial/industrial projects. Accordingly, the dealer reached out to an affiliated company in Philadelphia, Pennsylvania that specialized in larger treatment solutions and possessed extensive big-pipe experience. In a joint venture, these two dealers then completed the assessment and identified several issues with the existing water softening equipment servicing the hotel’s three boilers and large 24/7-operating laundry facility (see Image 1).

Originally installed in approximately 1955, the existing softening system consisted of a triplex softener with three semiautomatic units that could also be run manually. Each of the three units was constructed of galvanized steel and measured approximately 84 inches in diameter by 108 inches in height (213.36 cm x 274.32 cm). Of the three units, one had failed and the remaining two were no longer functional in semi-automatic mode.

In addition, the assessment identified the following issues, in order of priority and level of concern:

After reviewing the hotel’s needs, it was determined that the most effective system for the hotel would include the following features:

The new system
Based on the preferred features identified, a quadraplex water softener, with parallel demand, delay demand and automatic metered functions was selected. This system consisted of four 20-cubic-foot (371.61-m2) tanks measuring 36 inches in diameter by 72 inches in height (91.44 x 182.88 cm) each. The tanks each had 600,000-grain softening capacity and are controlled by a single microprocessor faceplate. The digital faceplate offered a user-friendly interface and advanced controller features for flow rate, softening and diagnostic management, and the fully programmable microprocessor allows management and operation ranging from one to all four softener tanks simultaneously.

To ensure equal loading (with each tank softening an equal amount of water) a graduated reverse-return header was built. This header extended the full length of the system to the out- let of the bypass. Regeneration of the softeners was initiated based on water demand (or by manual regeneration), and only one unit regenerated at any one time, thereby insuring maximum system redundancy (see Images 2 and 3 and Diagram 1).

Project challenges and responses
As with many older facilities, there were a number of challenges associated with the project. These included access limitations due to a small freight elevator and no isolation shutoff valve for the purpose of cutting in the new softening system. In addition, the project required a simultaneous cut in of the new system, while leaving the current system in place, in order to ensure a constant supply of softened water. 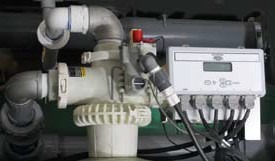 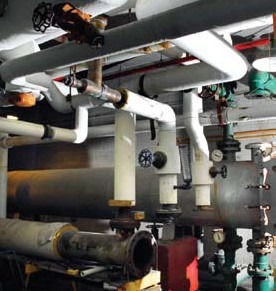 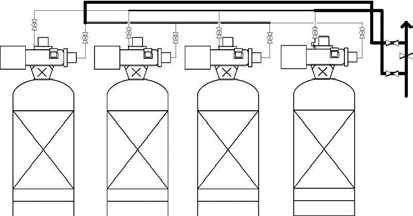 Diagram 1
When no shutoff valve is avail- able, it is standard protocol to utilize a nitrogen freezing blanket to create an internal ‘cork’ within the plumbing lines. This process, however, requires absolutely no water movement, which was not possible at the hotel. Therefore, the secondary option of turning off the supply lines to the entire facility was necessary. The hotel’s mechanical contractors subsequently completed the installation of the shutoff valve, which required eight hours. In comparison, had a nitrogen freezing blanket been used, the time to complete the installation of the shutoff valve would have been reduced by up to 50 percent.

A final note regarding project challenges is worth mentioning. As a nearly 60-year-old facility, the hotel plumbing infrastructure had been rebuilt and modified many times. This factor, coupled with no current plumbing schematics, made determining the flow directions and downstream equipment destinations complicated. Following lines visually that terminated in stub-outs or vanished behind walls and ceilings added additional obstacles to the process of correctly connecting the new softening systems. This scenario is typical in many older facilities, and requires the development of an on-site, flow-path check, after which physical verification through the use of end-point equipment shutoff valves and/or feed solenoids at various water destinations is completed (see Image 4). 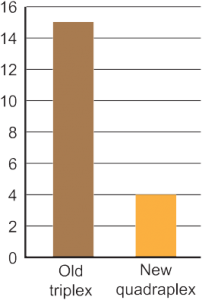 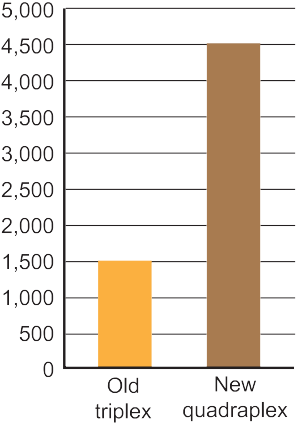 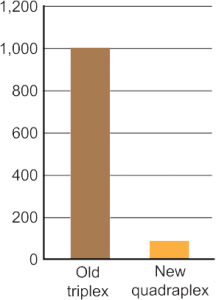 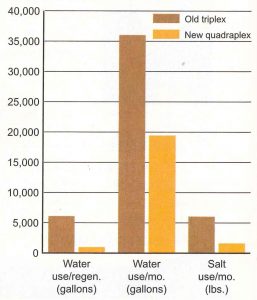 Old versus new efficiency analysis
Although the hotel’s prior triplex water softener had functioned over the past five decades, a close look at its efficiency compared to the new quadraplex showed the immediate tangible savings and benefits:

Expected return-on-investment
Despite the considerably improved efficiency of the new quadraplex system, the primary rationalizations for this capital investment were the downstream equipment protection, substantially lower laundry chemical costs, and significant reductions in equipment repairs and component replacements.

Initial estimates for savings in equipment service and repairs, coupled with laundry chemical usage reductions, were:

Graph 1 shows the anticipated lime scale buildup within a boiler at 10 grains hard water, which is typical of the water at the hotel. Image 1 shows one of the boilers at the hotel, which is currently being rebuilt as a result of the lime scale buildup due to the failure of the old softeners. Cleaning and rebuilding a boiler, like the one shown in Image 1, can require two weeks (or more) of labor, and up to $40,000 (USD) of associated time and materials costs.

Further benefits of the new system include:

A step backwards
As most commercial/industrial water treatment dealers know, convincing facility owners to update older treatment equipment, add equipment which hasn’t previously been needed, or switch to new treatment equipment is a challenge. The methodology used for this project was based upon taking the owners through a detailed quantitative and qualitative evaluation of the existing equipment versus the proposed equipment. As this case history has shown, the qualitative benefits, including a more environmentally conscientious operation through lower sodium and water discharges back to the municipality, combined with the significant quantitative benefits supporting a less than two-year ROI, ultimately assured a win-win situation for both the dealers and hotel owners.

Commercial/industrial facility owners and operators are typically more sophisticated than their smaller facility counter- parts at restaurants, coffee shops and convenience stores. As such, they require economic rationale to affect their decisions when it comes to large-ticket operational equipment such as water softeners. Providing project cost-benefit analyses and tying these to highly correlated financial savings is the key to convincing owners and operators to purchase new equipment, particularly during the tough economic times we are all encountering. The icing on the cake is the qualitative benefits, which meet everyone’s desires to achieve a lower environmental impact; of course, savvy owners and operators will publicize their environmentally beneficial decisions, and convert these qualitative benefits into tangible financial results through active promotions and marketing that ultimately make them more desirable than their competitors!

Graph 1. For 10-grain hardness lime deposited (inside boilers) versus temperature and water use 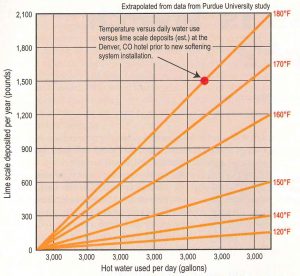 Consider this quote from the hotel owner as representative of what commercial/industrial facility owners and operators contemplate when evaluating capital expenditures: “…proposed state-of-the-art water treatment solution that not only reduced our hotel’s water and energy consumption, but will no doubt have a significant impact on extending the life expectancy of our physical plant, was a compelling ROI project that we could not pass up.”

About the author
Keith Warner, majority owner of Highland Water, LLC, has a varied background in manufacturing, consulting, importation and food manufacturing, in addition to filtration and bottled water applications. He has been President of Highland Water since 2004 and previously was President of Wine Master Cellars and Founder of Strategicore Consulting. Warner holds a Bachelor of Science Degree in business administration from the University of Denver, and an MBE from Boston University, where he graduated with national honors recognition.

About the dealers
Highland Water, LLC has been providing water treatment solutions and equipment since 1997. The company’s staff, with combined experience of over 60 years, have designed, built and installed water systems in over 25,000 homes and 3,000 businesses. Highland Water’s expertise includes problem and well water treatment, advanced oxidation methods and multiple-parameter treatment systems. The company has represented many of the largest manufacturers of water treatment.

Recognizing the magnitude of the hotel water softener project, High- land Water reached out to Suburban Water Technology to form a joint venture to effectively deliver the project. The combined staffs brought to the project over 100 years of experience in all facets of residential, commercial and industrial water treatment. Highland Water and Suburban Water Technology are now working on numerous other industrial and large-commercial water treatment opportunities throughout the US as a JV partnership.

About the hotel
The Chartres Lodging Group, LLC completed purchase of the 4,867-room Adam’s Mark Hotel portfolio in early 2008, and immediately thereafter announced its renovation, rebranding and repositioning plans for the five properties, including Adam’s Mark Denver. It was repositioned into the Sheraton® Denver Downtown Hotel, managed and operated by Starwood Hotels, subsequent to the completion of a $70-million renovation of the facility.