May the Green be with you! Now that Orange County California’s Plant #21 has shown the world that sewage can be converted back to potable water inventory, every municipal wastewater treatment facility is looking to get on the ’green‘ wagon and do  their share by recycling wastewater. Reclaimed water in excess of 1,000 ppm TDS, however, has limited value, and the pressure is on to reduce TDS creep by limiting residential and industrial softener brine discharge. They have your water softener in their cross hairs. Here is one way to minimize your salt discharge while maintaining ultra-high brine efficiency and capacity on your softening process.

Hard water limitations
Hard water, that which contains dissolved calcium and magnesium salts, has issues with the industrial manufacturing world. Hard water may interfere with manufacturing because:

Soft water does none of these, which is why it is preferred for industrial processes.

The salt issue (reaction 1)
When a softener exhausts and no longer can remove adequate hardness ions, it is regenerated with a solution of sodium chloride (salt). Generally, 300 percent of the stoichiometric amount of salt is needed to produce the lower leakages required to satisfy most commercial and industrial needs. In other words, softener regeneration is about 33 percent efficient (residential units using lower brine settings are about 50 percent efficient). So 33 percent of the sodium in the sodium chloride goes onto the resin, displacing calcium and magnesium, and 67 percent (along with 100 percent of the chlorides) goes down the drain. A small industrial plant operating 24/7 with a 50-gpm softener on 20-grain hard water will discharge about 250,000 pounds of salt per year to drain. That much salt will raise the TDS of 30 million gallons of distilled water to >1,000 ppm TDS and make it nearly impossible to recycle for agricultural and non-critical irrigation.

In addition, to regenerate the spent unit with soft water from an alternating unit would result in an additional 1,380,000 gallons of water down the drain every year (assuming 735.8 regenerations per year at 75 gal./cu. ft. each time). Each run becomes 11.9 hours. This represents five percent of the total system capacity.

Brine reclaim
By initiating an aggressive recycling program, reclaiming brine, backwash and rinse, the cost of salt, water and waste disposal could be reduced. Using the reclaim scenario, the last 50 percent of the brine is captured and used as the first 50 percent for the subsequent regeneration cycle. Let’s look at some numbers and work backwards. 7.5 lbs. of salt will offer a capacity of about 22,500-gr./cu. ft. At the 15-lb. level, we see about 30,000-gr./cu.ft. The last half of the brine only produces a capacity gain of 7,500 gr./cu. ft. Therefore, we are only using 7,500/6,000 (theoretical value for amount of hardness removed per pound of salt at 100 percent efficiency) = 1.25 lbs. of that salt. The last half still contains 6.25 lbs. of NaCl. Process last half with virgin brine, for a total dose of 13.75 lbs. This will divert the initial portion of the slow rinse water back to the brine silo to replace the water portion of the sweet brine used for make-up (approximately 75 gallons), and a portion of the rinse goes to dilution of saturated brine to make up the sweet brine (approximately 90 gal.). The backwash water will be filtered and recycled. The fast rinse will find a home brine and small portion of the slow rinse (at 25 gal./cu. ft. or 625 gallons per regeneration) will be disposed of (see Figure 1). 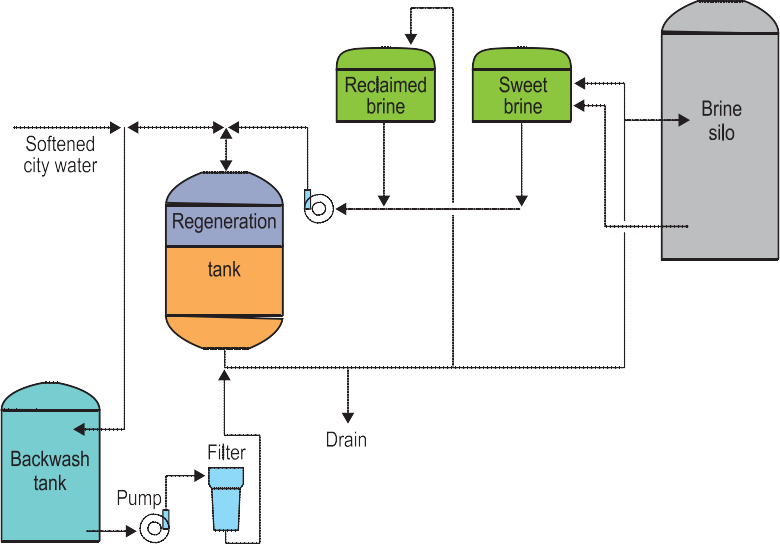 A quest of impossibility
There is considerable effort being put forth at the moment to develop clever recycle schemes with minimal water use and build the ’ultimate efficiency’ softener. Even ultrahigh efficient softening regeneration, however, still dumps chlorides. Hardness that is stripped off the resin during regeneration goes down the drain as calcium and magnesium chloride. The chloride issue has been the primary sticking point with California and other restricted areas. High chloride is considered harmful to both plant and animal life, and its presence reduces the ability to reuse that water for agriculture or aquaculture. So no matter how clever, no matter how efficient, no matter what, the brine must be hauled off site at considerable cost. 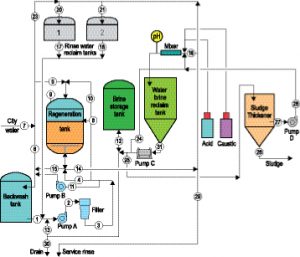 Total recycle approach
A 1994 article1 described a regenerant recycle and reclaim system whereby the excess sodium and chlorides from the regeneration are captured and retained in the plant, while the hardness that is regenerated off the resin was precipitated. The very reactions that cause hardness ions to drop out make this system work. An excess of brine (either sodium or potassium) can be used because there’s almost 100-percent recovery of the excess. For pilot plant runs done in 1994, a level of 30 pounds of NaCl were selected and achieved average capacities of 36,000 grains+ per cubic foot of resin with a brine efficiency of over 5,600 grains per pound. An added bonus was the <0.25-ppm of hardness leakage from the process. The process was called Zero D. With the Zero D process, hardness is precipitated from the waste brine with a near stoichiometric quantity (calculation of the exact quantities of reactants and products in a chemical reaction) of sodium hydroxide (NaOH). All divalent ions that are insoluble as the hydroxide form (including calcium, magnesium, iron plus heavy metals such as copper, zinc and lead) drop out of solution and settle. The supernatant liquid (the clear fluid above a sediment or precipitate) containing excess NaCl and NaOH stays in solution and is nearly hardness free. Precipitate is drawn off to a thickening tank or clarifier (where additional salt and caustic are recovered), and the supernatant is then neutralized with dilute hydrochloric acid (HCl) back to NaCl. The following reactions illustrate the
process:

Regeneration (reaction 2)
Using an 11-percent brine containing 1.0 lb. NaCl/gal., we introduce 25 gallons of brine/cu. ft. or 625 gal./cycle. Initial effluent from the regeneration will be water from the backwash, which is diverted to the backwash tank. Once TDS starts to climb, we divert the next 730 gallons to a spent-brine storage tank and the slow rinse is diverted in two aliquots of 450 gallons each to two storage tanks. Slow-rinse water will be recycled using the higher TDS first and the cleaner portion will finish. As with the brine reclaim example, the fast rinse will be used for plant utility. It will be slightly elevated in TDS initially. Total fast rinse will be about 400 gallons. We now have about 12 hours to precipitate and clarify reclaimed brine for the next cycle.

Hardness in reclaimed brine
For the purpose of calculating costs, we will work on pure mathematics based on the theoretical reactions. 35,000-grains/cu. ft. is equal to a 1.62-gram equivalent of hardness per liter of resin. Using 25 cu. ft. (28.32 liters of resin comprise a cubic foot), the total capacity of the system is (1.62 x 28.32 x 25) = 1,147 gram equivalents of hardness. Since this much hardness is removed from the resin with each cycle, and if it is assumed that we have pure calcium hardness (equivalent weight = 20), 22,950 grams (or 50.5 lbs.) of calcium per cycle will be removed. If that much calcium were to have precipitated as CaCO3 scale, it would amount to 126 lbs. That’s a lot of scale reduction.

To precipitate that much calcium will take 1,147-gram equivalents of sodium hydroxide (equivalent weight = 40) or 101 lbs. At 6.364 lbs., 100 percent per gallon of 50-percent NaOH, we need 15.9 gallons. This is the stoichiometric amount to replace sodium that was actually used to push calcium off the resin. We also have to add a driving force by raising the pH to approximately 10. Since there is little alkalinity to buffer the salt solution, 110 percent of stoichiometric will be used, giving a total NaOH addition of 17.5 gallons. After precipitation (reaction #3), precipitated lime will be drawn off and excess caustic neutralized with 32 percent HCl (reaction #4). Due to addition of an extra 10 percent of NaOH, it will be neutralized with 9.0 lbs. of 100-percent HCl (3.0 gallons)—see reaction #5. By using 50-percent NaOH and 32-percent HCl, we are able to maintain our brine strength at 11 percent. The sludge continues to thicken and additional brine can be drawn off to maintain the sodium levels (see Figure 2).

Comparison of costs
Table 1 shows a comparison of costs in terms of 1,000 gallons of soft water produced. This includes the cost of the water used to regenerate, chemical and waste disposal costs (see Table 1).

Conclusions
It appears that considerable cost reduction could be derived for a small industrial plant that has to haul brine waste from softener regeneration. Chemical precipitation and judicious water recycling can reduce operating costs by perhaps 90 percent. In addition, the higher capacity derived from high brining can cut the number of regenerations by up to 20 percent, with additional savings on manpower as well. Brine recycling can reduce costs by almost 65 percent, with very little additional equipment. Recycling saves on salt, water and hauling costs.

Note
After the first pilot study in 1994, I was able to find users for the ’milk-of-lime‘ sludge produced by this system. Lime and magnesium oxide are used for the precipitation of metals from plating-rinse recovery systems and other metal surface-finishing operations. This particular sludge is an average of 80-percent calcium and 20-percent magnesium oxide. It also contains some sodium hydroxide, making it not only effective but highly desirable (the buyer even offered to pick it up). The incidental content of heavy metals is passed along to the next individual who’s really into heavy-metals precipitation, and also takes the hand-off on potential disposal problems. Each batch of 25 cu. ft. would produce approximately 141 lbs. of dry lime (CaO).

About the author
C.F. ‘Chubb’ Michaud, CE, CWS-VI, is CEO and Technical Director of Systematic Company, which he founded in 1982. He serves on the Pacific Water Quality Association’s Board of Directors (since 2001) and chairs its Technical Committee.

Michaud has also been a member of the Water Quality Association’s Board and Board of Directors as well as past Chair of the Commercial/Industrial Section. A founding member of WC&P’s Technical Review Committee, he has authored or presented over 100 technical publications and papers. Michaud can be reached at Systematix, Inc., 6902 Aragon Circle, Buena Park, CA 90620;telephone (714) 522-5453 or via email, cmichaud@systematixUSA.com.