By Michael Hank and Dan Wyckoff

With its unparalleled reliability and ability to remove particles in the nano-range, ultrafiltration (UF) has become the treatment technology of choice for many applications, including the sensitive field of drinking water treatment.

Supplying clean, safe drinking water is a steadily increasing challenge, even in highly industrialized countries. Continually evolving regulations, pollution from industrial and commercial uses, increasing awareness about the hazards of existing water contaminants, decentralization of many drinking water supplies, and the financial restrictions of owners and operators, all must be considered when drinking water treatment systems are designed.

In rural areas, centralized treatment under the supervision of specially trained engineers and operators is not feasible, even though the challenges those water supplies are facing are the same as those of large, much better-equipped facilities. Frequently, raw water used to produce drinking water is taken directly from, or influenced by, surface water. It is very likely to contain color, turbidity, bacteria and parasites and, in some cases, even pesticide residuals or trace concentrations of endocrine-disrupting substances from the waste products of people and livestock.

Drinking water must not contain any fecal bacteria, as they are pathogenic themselves and are an indicator of the possible presence of other microorganisms and parasites in the water. Therefore, disinfection technologies like UV radiation or chlorination are commonly employed. With many pathogens becoming increasingly resistant to standard disinfection methods, pre-treatment to the disinfection stage, which is often neglected when discussing how to meet drinking water regulations, is now under closer scrutiny by authorities, operators and engineers.

Not only the currently implemented US Enhanced Surface Water Treatment Rule (ESWTR), but also the latest revisions of European and German drinking water regulations (TrinkWV) strenuously emphasize the importance of well-functioning pre-treatment before water is finally disinfected. Ideally, disinfection pre-treatment is supposed to deliver drinking water quality by itself, and enable the downstream UV, chlorination, ozonation or similar process to act as a redundant second barrier.

Industry experts estimate that in the US alone, there are up to 15 million private water sources and, according to FDA estimates, over 15,000 small, municipally owned water sources used to produce drinking water, either directly fed from, or influenced by, surface water. It is well understood that in order for common disinfection processes to perform predictably, reliably and without causing pathogenic byproducts, water flowing into such a disinfection stage needs to be free of dissolved organic carbon (DOC), below 0.1 NTU turbidity and, in many cases, free of spores or viruses.

By defining this low effluent threshold of turbidity, US ESWTR and German TrinkWV both aim at two targets: first, remove colloidal material that keeps downstream UV radiation from penetrating the water and disabling microorganisms and, second, remove parasites like Cryptosporidia, known to be three to five µm in size, along with colloidal substances that cause turbidity.

Figure 2. Membrane fiber bundles before being processed into elements. 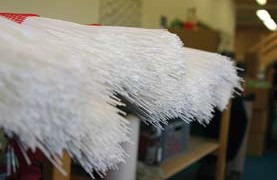 Many studies, such as those conducted by the US EPA or German DVGW approval institute, have shown conventional treatment methods like cartridge filters (even dual-stage and nominal one µm cut-off) are not capable of removing turbidity and parasites reliably when operating on wells temporarily influenced by rainfall, snowmelt or circulation caused by temperature differentials in lakes or dams in the autumn. It has been noted in a DVGW test report,1 “that even one-µm pre-filtration cannot rebliably reduce turbidity far enough to a level that UV can work on.”

Conventional cartridge or media filtration work on the basic principle of depth filtration. Ultrafilters work on the principle of surface filtration. The term ultrafiltration is used to describe a membrane filter, ideally with a pore- size of 20 nanometers or less. This is smaller than viruses, and much smaller than bacteria and spores, rejecting virtually all non-dissolved particles on its surface. Quality membranes have proven to provide full virus rejection when tested with MS2 phages. In order to achieve that precise pore-size-distribution, such membranes with the essential raw materials (e.g., PES-granulate) may be acquired from only a handful of companies in the US, CDN, Europa and Singapore that manufacture this product.

Most common UF membranes used for water filtration are manufactured as hollow fibers (Figure 1), with an inner diameter of typically 0.7 to 0.9 mm. It has proven to be very efficient and effective to drive raw water through the membrane’s wall from the inside to the outside, in a so-called ’dead-end‘ mode, where all the raw water being pressed into the membrane fiber has to flow through the membrane and is thereby filtered (see Figure 1).

Unlike reverse osmosis (RO), UF does not change the mineral content of the water significantly and it can operate at pressures as low as four to 14 psi. Classical membrane processes like RO start to work efficiently only at around 100 psi. These high-flow characteristics make UF an ideal process to treat large quantities of water, either for whole homes, communities, industry or commercial applications.

In order to achieve such high flow-rates, thousands of individual hollow fibers are bundled (Figure 2), packed into a filter housing and then sealed in a process called ’potting‘ to absolutely separate the clean-water side from the raw-water side of the filtration. Those large numbers of membrane fibers (made from a compound containing the synthetic material polyethersulfone [PES]) offer a high flow, but are also the Achilles heel of the process. In the early days of UF, they frequently ruptured.

Today, many manufacturers have overcome this weakness by using fiber-supporting filter-module configurations, that keep membranes from moving and so avoid what is widely called fiber breakage due to material fatigue. The risk of damage for a UF membrane’s integrity today comes mostly from water hammer, debris in the raw water source or shavings that have remained in the pipes after installation.

Once damaged, the ultrafilter’s rejection rate for pathogens drops. While it is possible for most manufacturers to repair dam- aged fibers, and thus not require the replacement of the complete filter element, the difficulty lies in detecting broken fibers and sending an alert signal out to the operator so remedial action can be taken. 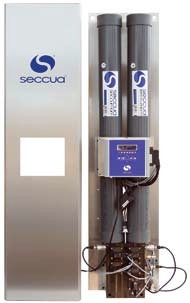 In order to recognize UF systems as an effective barrier against pathogens, most health authorities require a daily test be performed on a membrane system to verify its integrity, including notification to the operator of the water treatment system about any testing failure. In large-scale ultrafiltration treatment plants, such membrane integrity testing is commonplace, done automatically without any operator attention.

In addition to membrane integrity testing, UF plants—like conventional water treatment systems—must be capable of controlling peripheral equipment, which on a surface water treatment system may include turbidity monitoring, feed flocculation, automatic system cleaning initiated by the degree of fouling of the system modules and, if required, automated and chemically enhanced cleaning-in-place using different chemical cleaning agents as well as a backwash pump. The programmable logic controller (PLC) of the system must be able to send alert messages to its operator via remote messaging (e.g., SMS, BUS system or other). Ideally, the system should be configured for remote access by trained operators to monitor and optimize its performance.

To achieve these capabilities, UF plants with filtration ca- pacities greater than about five mgd include a PLC that can cost around 20 percent of the total investment, depending upon the control features, but no less than $15,000 (USD). The remaining costs are borne by the filtration system itself, engineering, project management and related costs. Most of the latter can be scaled relative to system size. The PLC control, however, has to deliver the same functionality, whether it is a 10-gpm (37.85 L/m) or a five-mgd (18 mLd) system.

Small water sources, from privately owned wells to water supplies for villages up to 2,500 inhabitants, often deal with the same water quality challenges as large cities, but their means of financing water treatment systems are weaker, if they exist at all. Their needs can be economically achieved by employing pre-engineered, packaged UF systems, using lower-cost control systems designed specifically for the requirements of UF processes.

Figure 4. Alpine Lodge, serving up to 500 meals per day, running on an ultrafiltration system. 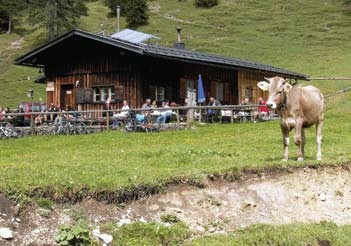 When choosing a standardized membrane filtration system, users or implementing dealers should ensure the system controllers could operate external feed and backwash pumps, dosing pumps for flocculation and chemical cleaning, and parallel and standby operation of multiple units. To meet state regulatory requirements, they also need to have automatic membrane integrity testing, data logging and an input for an external turbidity monitor. In some US states, data logging is required every four hours; controllers must have enough memory available to store data between scheduled operator visits. Alert messages should be automatically generated and, due to extensive cell-phone coverage, broadcast to multiple cell phones. Remote monitoring and control through GSM/GPRS modems will save a lot of time and expense when systems are running on feed-waters with changing quality, and when it is required to download and utilize the logged data or change the unit’s settings without going to the plant site.

Examples of how this technology enables remote installations (Figure 3) to perform effectively and reliably include numerous villages and communities of farmers using UF systems treating glacial water from the Bavarian Alps (Figure 4). These waters frequently contain high amounts of dissolved organic carbon (DOC) and colloidal material. They may also contain bacteria, viruses and parasites such as Giardia. Systems operation is fully automatic. A technician logs on to the system controllers from his or her office several kilometers away to monitor the units. In the unlikely event of a system upset, the technician and local service provider receive alert text messages from the unit controller describing the event. They can then decide whether immediate action is required and can initiate that action from their computer (Figure 5).

Figure 5. Connecting to remote, small UF systems via the Internet. 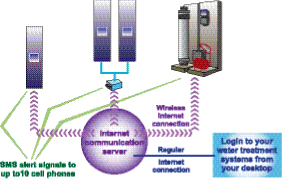 Originally engineered and designed in Germany, Seccua systems have already been introduced into the US and Canada, Mexico and South America, Australia, China and other Asian countries. This development now makes it possible for individual and small community water systems to employ the same treatment technology as large cities, in a low-cost, effective and perfectly reliable way.

Michael Hank began his career in sales and business development at a US company specializing in membrane technology for water desalination. Founder and CEO of Seccua GmbH and Co-Founder of Seccua Americas LLC, he has been the Managing Partner since April 2005. By August 2009, Hank had implemented over 500 reference projects globally for Seccua. In 1999, the graduated utilities engineer founded inge AG, the first manufacturer of UF membranes for purifying water and wastewater in Germany. Under Hank’s management, the company achieved sales of €3.5 million by the end of 2004. In 2005, he sold the majority of his shares in inge AG and also resigned from the board in order to focus completely on the development of Seccua.

Dan Wyckoff, Co-Founder and General Manager of Seccua Americas, LLC, has been in the water treatment industry for over 30 years. He began his career with a major US water treatment company, during which he held senior engineering, sales and business development positions, including a 10-year assignment living and working in Asia. Market focus included filtration and membrane treatment processes for residential, commercial and industrial applications. Prior to establish- ing Seccua Americas with Michael Hank, he was head of the filtration technologies division of the first company in the US to manufacture and market standardized UF systems for POU/POE applications. This pioneering work led to the acceptance of UF as a recognized technology for home and commercial applications.