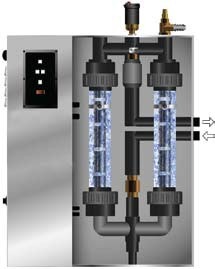 Among the water quality issues considered problematic by industry experts are ‘problem waters,’ which can be defined as those supplies with high concentrations of iron, manganese or hydrogen sulfide contamination. Generally associated with well water, these contaminants can cause staining, fouling and/ or odor and taste issues.

Concentrations of iron and manganese as low as 0.3 mg/L and 0.05 mg/L, respectively, can stain fixtures and plug valves and orifices in equipment. Very low concentrations of hydrogen sulfide result in significant odor issues.

Normal water softening systems are not completely effective with the higher concentrations of these contaminants, nor were they designed and intended to do such. The following case study is one resolution to problem well water.

Well problems
Iron and manganese are chemically similar. When they are both present in well waters they cause similar problems. In deep well waters where the oxygen levels are low, these metals exist in their respective reduced and dissolved forms.

During the process of pumping and other processing activities, the reduced form of the metals (usually colorless) is oxidized by exposure to air. The oxidized species (mostly colored) may react with other anions present in the water, forming compounds.

Depending on water pH, type and the concentrations of meals and anions present in the water, the resulting compounds may exceed their respective solubility product limits. They will thus become insoluble and precipitate out of solution.

Several technologies are available to remove these metals. A new and innovative technology now offers significant promise in this area.

Traditionally, iron and manganese concentrations in water are reduced by controlled oxidation/filtration. Oxidation is ac- complished through aeration, ozonation or by chemical additives such as hydrogen peroxide, chlorine or potassium permanganate. The insoluble oxides are then removed by filtration.

There are also several special media capable of combining oxidation and filtration in one step. The most common of these media is manganese greensand (MGS).

MGS has a long history of success when used in tanks typical of those used in water softening. As with softeners, manganese greensand filters require regeneration, the frequency of which depends on iron and manganese concentrations and total water usage.

The regeneration process requires a backwash to remove sediment and the iron oxide from the media. It also requires some reaction time for the potassium permanganate to restore the oxidative coating.

New technology
A new technology targets iron, manganese and hydrogen sulfide utilizing a special and proprietary electrode technology, which electrolyzes water into its basic chemical components of oxygen and hydrogen. The oxygen produced is in extremely small bubbles (70 microns—about the diameter of a human hair).

These ‘microbubbles’ are numerous, with large surface areas of 100-percent oxygen exposed to iron, manganese and hydro- gen sulfide in solution. Contaminants are virtually oxidized to their insoluble states immediately and are easily removed from the water by filtration (Figure 1). The inlet to a standard filter media tank is used for removal of oxidized iron, manganese and hydrogen sulfide.

Utilization history
The advantages of this system technology were proven in an application with a fast-food restaurant that had been experiencing significant equipment problems, as well as numerous customer complaints related to quality issues in their incoming water. These issues had plagued the restaurant for more than 10 years.

The biggest advantage of this technology is to increase surface area and concentration of the electrolytically generated oxygen bubbles. The restaurant attempted to use manganese greensand filtration to reduce concentrations of iron and manga- nese, followed by softening. With this technology, however, the manager was very concerned about the handling of the hazardous regenerant chemical by unskilled personnel. Close proximity of this chemical (potassium permanganate) to food products was also a concern.

It was estimated that the restaurant used 45.36 to 54.43 kilo- grams (100 to120 pounds) per year of potassium permanganate (dry-weight basis) to keep the filter in operation. It was a significant problem just finding the space to store the chemical.

Manganese greensand was only one of several iron removal technologies attempted (including chlorine oxidation). None met the water quality and handling requirements of the restaurant.

Technology results
The new technology unit was installed in November, 2008. It consisted of a continuous flow-through electolyzer unit capable of processing 75.7 L/m (20 gpm) and oxidizing up to 20 ppm iron and 2.5 ppm manganese through a greensand media filter to polish the stream.

The backwashing time requirement for this filter is only one- quarter of that for the manganese greensand filter (10 versus 40 minutes per day). Water savings resulted in over 378,541 liters (100,000 gallons) per year.

To meet the quality requirements of the restaurant, TDS had to be reduced and a commercial RO unit was selected. This unit not only met the TDS requirements, it also eliminated the need for the water to be further softened.

After installation, the resulting water analysis tests showed no detectable levels of iron or manganese. The turbidity was less than one NTU, while TDS was less than 80 mg/L and hardness less than 30 mg/L. Non-affected was pH, which remained at 7.91.

The technology is highly automated, has a small footprint, is less costly, and therefore, is less labor intensive. It is easy to set up and operate and will require only regular maintenance.

This is an example of economically solving water quality issues in a challenging commercial application. The system pro- vided significant advantages over existing technologies in treating problem water, and could become one more weapon in the arsenal of the water treatment professional.

Peter S. Cartwright, PE, CWS-VI, is President of Cartwright Consulting Company. He has been in the water treatment industry since 1974, has authored over 125 articles, presented over 125 lectures in conferences around the world and has been awarded three patents. Cartwright has chaired several WQA committees and task forces and has received the organization’s Award of Merit. A member of WC&P Technical Review Committee since 1996, his expertise includes high-technology separation processes such as RO, UF, MF, UF electrodialysis, deionization, carbon adsorption, ozonation and distillation. Cartwright is also Technical Consultant to the Canadian Water Quality Association. He can be reached by phone (952) 854-4911; fax (952) 854-6964; email pscartwright@msn.com or on his website, www.cartwright-consulting.com.

About the product/company
The only technologies required to meet all of the water requirements of this establishment was an electrolytic oxygenation unit developed by Water D.O.G. Works® and a Greensand Sand Plus filter. A Pureoflow commercial RO unit was also selected for use.