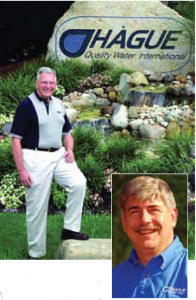 Hague Quality Water International, the oldest water treatment manufacturer owned and operated in the US under continuous family ownership, announced the celebration of its golden anniversary in 2010. Started by William R. Hague in 1960, the company’s contributions to the water treatment industry are many, resulting in numerous awards and recognition for multiple cutting-edge technological patents and product designs. Today, under the leadership of Robert ‘Bob’ A. Hague, the firm employs approximately 100 workers at its state-of-the-art 70,500-square-foot manufacturing facility located in Groveport, OH.

A proposed law would require new homes, larger developments and some redevelopments in Los Angeles, CA to capture and reuse runoff generated in rainstorms, the LA Times reported. An ordinance approved in January by the Department of Public Works would require such projects to capture, reuse or infiltrate 100 percent of runoff generated in a 0.75-inch rainstorm or to pay a storm water pollution mitigation fee. The new requirements would prevent 104 million gallons of polluted runoff from ending up in the ocean. The ordinance moves to the Energy and Environment and Planning and Land Use Management committees of the City Council before going to a council vote and the mayor.

Seccua Americas, LLC (the Americas sales and distribution arm of Seccua GmbH) now distributes its filtration systems in the Canadian market in cooperation with FOREFRONT INITIATIVES INC. of Ontario, Canada. This distribution partnership allows FOREFRONT to exclusively offer the entire Seccua product range to its customer base in Canada. 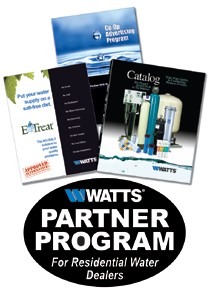 The International Bottled Water Association is forging ahead in the social media blogosphere with a YouTube Chan- nel (www.youtube.com/user/Bottled– WaterMatters) featuring 10 of its own bottled water videos. The organization began producing and posting the videos in recognition of the popular social media website as a main source for the spread of misinformation about bottled water by industry critics. The channel, which was launched in early summer 2009, proactively presents useful information about bottled water, and the videos address bottled water issues such as recycling, packaging, water quality, family-owned businesses and rumors about plastics and illnesses.

LANXESS AG announced the construction of a new chemical plant at its site in Bitterfeld, Germany. The company is investing a total of around €30 million in this pioneering project to develop and produce membrane filtration technology, which will create 200 new jobs. The new plant is scheduled to begin operations for a pilot-and-development phase toward the end of 2010; the first products should be launched in 2011. An area totaling some 4,000 m2 (43,055 sq.ft.) has been set aside for the creation of high-tech laboratories, logistics areas, offices and a new, state-of- the-art production facility.

Amiad has established Amiad Andina, a joint venture with CIMA, a Chilean distribution company active in irrigation and construction industries, to enhance the sale and marketing of Amiad’s products and solutions in the industrial and munici- pal markets in Chile, Peru and Argentina. CIMA has been Amiad’s distributor for municipal and industrial markets in Chile since the end of 2007. Under the terms of the agreement, Amiad holds 50 percent of Amiad Andina shares through the company’s subsidiary (Amiad Chile) and CIMA holds the remaining 50 percent. It is expected that each party will make an initial capital investment of $100,000 (USD) and an additional $100,000 from shareholder loans.

The lack of sufficient infrastructure prior to the disastrous earthquake in Haiti in January exacerbated some of the worst living conditions in the western hemisphere. To address basic needs for food, water and medicine, groups around the world have held telethons, aid drives and other events geared toward helping fellow humans who are in the most dire distress imaginable. As with other disasters (natural and otherwise) visited upon the planet, the water treatment industry rose to the unique challenges posed by the massive earthquake in Haiti. From bottled water (a mainstay in disaster relief) to mobile water treatment units, industry leaders have responded rapidly and faithfully to the needs of the Haitian people. Following are examples of continuing efforts to relieve the massive suffering that has encompassed the tiny Caribbean nation.

Pentair, Inc., in coordination with its Foundation, donated $200,000 (USD) to fund portable water treatment systems and related supplies. Working with the company’s charitable partner, Water Missions International (WMI), Pentair was able to provide 10 Living Water Treatment Systems (LWTS) and five chlorinators, which can provide potable drinking water to approximately 100,000 people daily. Each LWTS employs a multi-stage filtering system that reduces disease by removing waterborne pathogens, which can cause diarrhea, dysentery, cholera and hepatitis. The LWTS operates from any surface water—ponds, lakes, streams, etc. Chlorinators are for use with shallow wells where the water is clear and does not require filtration, but could still be contaminated. The systems were shipped and installed in coordination with WMI, who have personnel onsite. “With the significance and breadth of the recent earthquake in Haiti, we know water is a fundamental and immediate need. By partnering with WMI, we are able to help get clean, filtered water to people as quickly as possible,” said Randall Hogan, Chairman and CEO of Pentair.

“The bottled water industry has always been at the forefront of relief efforts during natural disasters and other catastrophic events. Throughout the years, bottled water companies have immediately responded to the need for clean water after natural disasters, such as Hurricane Katrina, the earthquakes and wildfires in the West, or the terrorist attacks on the Pentagon and World Trade Center. More recently, our companies provided bottled water to those in need in the aftermath of the 2009 spring flooding in the Midwest.” —IBWA President Joseph K. Doss

Norit X-Flow, in partnership with Dutch water company PWN, has supplied seven Perfector-E compact water treatment systems, capable of producing a total of nearly 90,000 gallons of reliable drinking water per day to the residents of Haiti. Each unit has its own unique filtration system utilizing a combination of ultrafiltration membranes and UV light sterilization; the plug-and-play systems are powered by a generator. Using the equipped submersible pump, water is taken from the source and fed directly into the unit, where a prefilter strainer removes larger particles from the feed water. The water is filtered through UF membranes, which remove suspended solids, including viruses and bacteria. The UV light acts as a secondary barrier to protect against contaminants.

PWN and Norit X-Flow originally developed and deployed the Perfector-E immediately after the 2004 tsunami tragedy in Asia. The self-contained, easy-to-use, portable water treatment plant addresses the needs of people who have no other source for reliable drinking water. Six PWN engineers, extensively trained by Norit, accompanied the units to assure that they will run properly and assist with the dispensing of water to the Haiti victims.

Crystal Springs® (a division of DS Waters) is working with local officials in the impacted areas of Haiti to help provide safe drinking water to victims of the earthquake. The relief support is being achieved through the combined efforts of Crystal Springs and one of its key partners, Ice River Springs Water Co., Inc. Their donation amounts to over one million half-liter PET bottles of Crystal Springs Water.

“Our company and staff immediately felt the need to assist Haiti and this donation was an obvious choice for us. We sought matching donations from one of our key partners in the southeastern US, and Ice River immediately responded,” said Stewart E. Allen, Co-CEO of DS Waters. “Based on our experiences in the past with other natural disasters such as Hurricanes Ike and Katrina, we fully recognize the importance of community support at a time like this, and we know the value of a quick response.”