This article compares POU sorbents for trace organic aqueous removals using the Gravimetric Adsorption Energy Distribution (GAED) method. GAED full characterizations1,2 were used to compare activated carbon filters from two commercially sold POU vendor devices. GAED provides the most precise and accurate test method (and least expensive), to evaluate sorbents, which work on the physical adsorption phenomenon. In this mechanism-of-action, adsorbate(s) molecule(s) are accumulated from an aqueous or air stream in nano-sized adsorption spaces, but the molecules are not chemically changed. GAED is an advanced test method that provides critical sorbent information not obtainable with classical standard methods. It provides lower-cost critical information for sorbent users and manufacturers compared to classical methods.

Sorbent media is the heart of a POU device, because it removes the targeted contaminants. The most noticeable benefit to the typical POU user is the aesthetic removal of chlorine taste and odor (T&O). Activated carbon eliminates hypochlorous acid T&O by reducing it to chloride ions, which have no T&O at low concentrations. Typically, activated carbon’s T&O-reducing capacity is higher than its trace-organic contaminant capacity. More likely than not, trace organic contaminants do not have T&O. This is why POU filters need to be replaced while they still provide T&O removal.

Sample preparation
Five POU devices containing activated carbon were tested to reveal differences in their aqueous target organic compound removal performance differences. Four of the samples were carbon blocks and the fifth was a granular activated carbon (GAC) containing ion exchange material. Sorbent materials were removed from each POU device. Blocks were analyzed as broken chunks. Removed material was dried in an oven at 110°C (230°F) for three hours to remove water. A low-drying temperature was used to avoid sorbent damage; typically, drying is done at 150°C (302°F). It is important to compare different sorbents performance on a dry weight basis. During sample preparation, all five samples lost less than two-percent moisture by weight, which indicates all five samples were clean and dry. This conditioning step allows the method to calculate all activities and adsorption capacities on a clean-carbon basis. 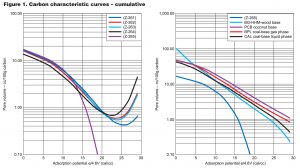 Sample runs
After each sample was cleaned and weighed, it was challenged with flowing adsorbent gas 1,1,1,2-tetraflouroethane (TFE). When physical adsorption occurs, TFE gas is liquified to a liquid-like state by graphitic London adsorption forces. TFE-adsorbed weight increases as the sample temperature is decreased, and decreases as the sample temperature is increased. The mass adsorbed was plotted against temperature, but the relative pressure was also changing. There are three variables affecting adsorption performance that change from point-to-point: vapor pressure, partial pressure and temperature.

The samples and standards runs measured between 273 and 340 quasi-equilibrium adsorption and desorption data points covering seven orders of magnitude in relative pressure (isothermal basis) and three orders of magnitude in carbon loading. The mass adsorbed on each of the nine specimens was also divided by the carbon mass to provide a weight-percent loading for easier comparisons. 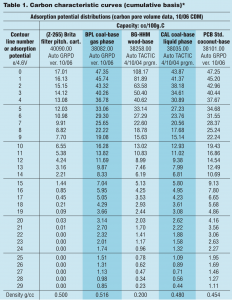 Characteristic curves
The tabular data and characteristic curves are shown in Table 1 and Figure 1. The 273-to-340 adsorption/desorption data points per run were interpolated to get 30 evenly spaced points covering the entire temperature range. Next, adsorption and desorption results were averaged to get the quasi-equilibrium values in Table 1. The difference between adsorption and desorption was minimal for all nine runs, thus demonstrating no carbon hysteresis, as expected.

The y-axis in Figure 1 is pore volume measured in cubic centimeter (cc) TFE liquid adsorbed/100 grams carbon, in- stead of a weight percent. Adsorbed TFE weights were divided by bulk density to convert a w/w basis to a v/w basis for easier comparisons.

Performance predictions from characteristic curves
Figure 1 characteristic curves are the only carbon-related information required to predict physical adsorption performance using the Polanyi Adsorption Potential theory.3 To do performance predictions, the nine polynomials in Table 2 describe these carbon samples. In these equations, y is the common logarithm of pore volume in cc/100 g carbon and x is the e/4.6 adsorption potential energy in calories/cc.

Isotherms for target compounds
The polynomials derived from the characteristic curves are also translated into adsorption isotherms. Isotherms are useful to provide the adsorbate loading on the specific carbon in g per 100 g carbon. Isotherms provide a GO or NO GO decision for a carbon application by indicating if the contaminant ultimate equilibrium loading capacity is high enough to be cost- effective. Also, GAED isotherms provide comparison of different carbon samples’ relative performances and the amount of carbon needed for an application. 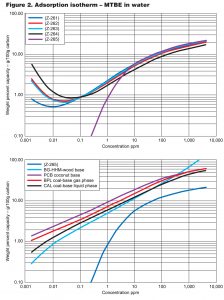 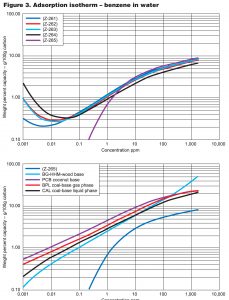 Isotherms for four standard carbons are also presented in GAED reporting. Some benchmarks are coal-, wood- and coconut- based commercial carbon samples. It is important to run known standard carbons with each batch of samples to assure the analytical process is within its statistical control limits. Running standards also provides a way to compare samples to benchmark carbon products.

GAED allows other compounds of interest to be compared for the samples and carbon standards. This is illustrated for 1,1,1-trichloroethane, a type V carbon application. All of the applications can be put into six types. Type V is a trace-contaminant, groundwater, pump-and-treat application. 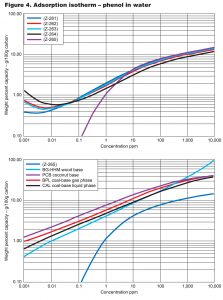 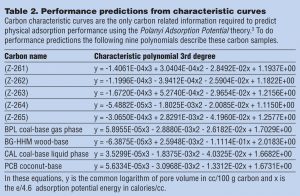 Discussion of results
Isotherms and trichloroethane bar graphs clearly show sample Z-265 as the poorest performer of the five samples. Samples Z-261 through Z-264 were provided by the project sponsor. Total adsorption pore volume, BET surface area and iodine numbers are best for Z-265, as shown in Table 3. 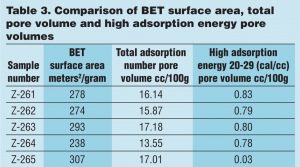 BET surface area and total pore volume correlate with the iodine number, so sample Z-265 would have the highest iodine number.

The reason for this apparent performance discrepancy between ASTM and GAED test results is the relative volume of high-adsorption energy pore volumes in the five samples. If only classical testing is done and BET surface area and iodine number were used, the wrong carbon would be chosen for trace organic removal because they only show the total loading capacities. By also using GAED, it revealed the best vendor’s carbon for trace aqueous organic removal applications because the high-energy pore volumes are determined in addition to the total pore volumes. In trace contaminant applications, only high-energy binding sites are used—a small part of the total pore volume.

The best carbons have the higher adsorption energy binding sites. The project sponsor’s samples were the best performing samples by a factor of 27. This relative performance is based on equal weight of both sorbents. From a user viewpoint, the best carbon would last 27 times longer than the relatively poor performer.

Conclusion
It is important to use advanced testing methods as a second opinion. We recommend using ASTM, AWWA and GAED testing to solve problems. GAED can help solve real-world problems not solvable only with standard methods, as demonstrated here, and provides a low-cost means to obtain isotherms with better analytical precision.

Prior testing of carbon blocks with GAED has demonstrated that GAC particles, combined with agglomerating thermoplastic binder, significantly loses some of its physical adsorption capacity. We have previously demonstrated that it is possible to separate GAC particles touching the binder from free particles trapped in the block, and run the particles on GAED to determine the lost pore volume over the adsorption energy range. Many applications2 for GAED testing are available. Recently it was used to reveal which carbon filters would be best to replace at a municipal drinking water plant that uses parallel GAC absorbents to provide a blended water supply.4

GAED example reports are available at www.pacslabs.com. Note that these reports provide more information than presented in this article due to space limitations. As well, the graphics contained in this article are only a small, representative sample of the full GAED report.

Acknowledgment
Henry Nowicki thanks Dennis B. Brown from Aquamira Technologies Inc. for providing testing samples and approval to publish a portion of their case study project on GAED data. It is the policy of PACS Laboratories to obtain written client approval before publishing, or presenting in its courses or consulting services, any client information.

About the authors
Henry Nowicki, Ph.D./M.B.A. is President of PACS. He has published over 100 papers and provided numerous PACS Short Courses and presentations in addition to telephone and consulting services and expert testimony for environmental sciences and activated carbon cases.

In addition to courses, Schuliger and Nowicki provide independent testing and reviews and recommendations for operating and proposed adsorption process equipment and planning. All authors can be reached by e-mail: Henry@pacslabs.com, George@pacslabs.com, Wayne@pacslabs.com and Barb@pacslabs.com, by phone at (724) 457-6576 or through the web site, www.pacslabs.com.