Analytical test methods are used to evaluate sorbents before purchase; monitor their performance for regulatory compliance; help to determine when they need to be changed; and develop new sorbents and applications. The world of analytical chemistry has had major advancements over the last two decades that are beneficial for activated carbon users and manufacturers. Measurements are now routinely provided at micrograms per liter (ppb) instead of milligrams per liter (ppm). With such lower quantitative detection level measurements, greater demands have been placed on the sorbents used to treat water and air streams to reduce contaminants.

Perhaps the best analytical instrument to come along for sorbent evaluations has been put together by Dr. Mick Greenbank.1 This instrumental method provides the sorbents’ isotherms for organic compounds that are physically adsorbed. Isotherms are a plot of the compound’s equilibrium concentration on the x-axis (in water or air) against the compound’s adsorption loading on the sorbent in grams per 100 grams or 100 milliliter of volume of the sorbent on the y-axis.

GRPD to GAED name change
Choosing a name for a product, disease, service, or child is an important task. Consider that pork industry representatives lobbied for a name change from swine flu to H1N1, based on there being no evidence linking the spread from pigs to humans, and also to prevent a misconception that pork products could transmit the disease

One consideration for a brand name is that it should be reflective of, and understandable by, the targeted market users. This is why Gravimetric Rapid Pore Size Distribution has been renamed Gravimetric Adsorption Energy Distribution.2

The basis for the name change encompasses several critical elements:

ASTM and complimentary GAED test methods
Presently, the testing community provides many more iodine and butane activity test runs than GAED full-characterization test runs. Even though those tests provide limited information compared to GAED, they are still the most requested test methods. A major limitation is that these two tests are conducted with the challenge chemical near its water- and air-saturation concentrations. Challenging activated carbon with a contaminant near its saturation concentration does not represent most activated carbon user applications.

The GAED full-sorbent characterization effectively challenges the sorbent over seven orders of adsorbate concentration, from trace to near-saturation concentration. This range provides a characteristic curve shown in Figure 1 for coconut-, coal- and wood-based commercial benchmark activated carbons. The x-axis is the quanitative adsorption energy (the higher the number, the stronger the adsorptive binding energy). The y-axis is the cumulative adsorption space for 100 grams of each sorbent at a given x-axis adsorption energy value. 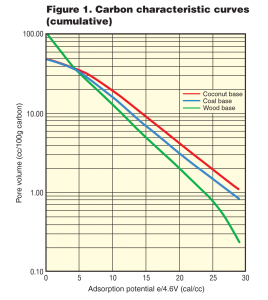 These characteristic curves are all that is needed to provide the sorbent’s full characterization, including vapor- or aqeous- isotherms.

Figure 2 provides a GAED run-derived presentation. The y-axis is the number of adsorption energy binding sites as a function of the absolute binding energy on the x-axis. 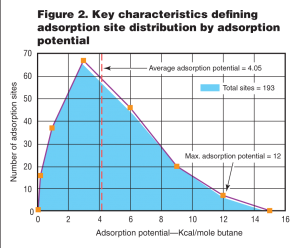 Historically, GAED has been used to provide the best activated carbons for users. Prior work has shown that nine carbons provided essentially the same iodine number and BET surface areas, but GAED revealed the two best carbons to solve activated carbon users’ municipal drinking water plant problems. They were also from lower-cost suppliers.

Typically, drinking water plants have a few regulated com- pounds, or some taste and odor compounds, which need to be removed. GAED is designed to facilitate removal of these kinds of low-level compound problems. ASTM and GAED test methods are complimentary; both need to be used.

Providing GAED instruments on a global basis is expected to help manufacturers better produce sorbent media products to solve modern problems that are currently waiting for appropriate sorbents. The future projection is that advancements in analytical chemistry will continue to play a large role providing highly purified drinking water from municipal plants to POU applications.

Input and advice welcomed
PACS has previously published in WC&P to demonstrate the practical applications for the testing technology.2 A series of new applications for GAED instrumentation will be presented at upcoming technical conferences.5–8 We plan to publish these articles here later in 2010.

If you have opinions on this name change or other adsorption models, let the authors know through Henry@pacslabs.com. We encourage readers to inform us about other heterogeneous adsorption models as we prepare a centennial 2014 Polanyi Model article. We expect one more name change when this testing technology is fully commercialized with an advanced instrument for the sorbent industry. Presently there are only three of these instruments in the world.

About the authors
Henry Nowicki, Ph.D. and MBA, provides the introductory course, “Activated Carbon Adsorption: Principles, Practices, Applications and Opportunities,” for the Activated Carbon School, and directs the day-to-day routine and advanced testing, R&D and consulting services for PACS. Dr. Nowicki can be reached at (724) 457–6576, via email, Henry@pacslabs.com or at the company website www.pacslabs.com

H. George Nowicki, BS and BA, is PACS Laboratories Manager and New Business Developer. He can be reached via email George@pacslabs.com or by calling (724) 457–6576.

Barbara Sherman, BS and MBA, is Operational Manager for PACS Testing, Consulting, R&D, Training and Conferences. She directs the day-to-day short courses, conference, and manages the business. She is the contact person for the carbon conference and courses registrations, and can be reached via email, Barb@pacslabs.com.

About PACS
Professional Analytical and Consulting Services, Inc. (PACS) is in its third decade of providing activated carbon services and other services to engineers and scientists: laboratory testing, R&D, consulting, training, expert witness services and conferences. The company provides 59 different 1-3 day short courses for scientists. PACS has been awarded nine government contracts/awards to develop new activated carbon products. It hosts the bi-annual International Activated Carbon Conference and Activated Carbon School Courses programs in Pittsburgh, PA every October, and a mid-year conference outside of Pittsburgh. Information about the firm’s services are available at www.pacslabs.com or by phone, (724) 457-6576.

…will be held in Los Angeles, CA at the Holiday Inn near LAX airport. The IACC-25 technical program dates are April 27-28 and the activated carbon school courses will be available before and after the carbon conference.

Typically, users do not learn about activated carbon during the formal education process. These courses have been formed with excellent, highly experienced teachers to provide the information necessary to help solve problems. The technical program and registration form are available at www.pacslabs.com or phone (724) 457-6576.

Your participation is requested to present technical information, be an exhibitor or send your marketing sheets without attending for inclusion into the Conference Proceedings.