FLUORIDATION The Good, the Bad and the Ugly Part 1

Fluorine (F) is the most powerful oxidizing element known. It is the lowest molecular-weight member of the halogen family (which includes chlorine, iodine, bromine and astatine), and is the most abundant halogen in the Earth’s crust. Since no other substance can oxidize fluoride ion, it is never found in its elemental free-gas form, but only as a fluoride salt. Its most common form is the compound Fluorspar, a form of calcium fluoride (CaF2).

In the latter 1800s, scientists from the medical community produced studies showing that the enamel of sound, healthy teeth contained more fluorides than was contained in the teeth of those prone to tooth decay. Further studies showed that fluoride ion was absorbed by bone as well as teeth, and was considered ‘beneficial’ for bone and tooth development and health.1

We now have learned that fluorides are known to reduce the incidence of rickets in children by stimulating the thyroid to maintain normal metabolic rates. Minute quantities in the diet limit the acid production of bacteria in the mouth, thus reducing decay. Significant advancement in oral hygiene was made when it was shown that fluoride could be applied topically. This led to a whole new era of tooth-care products and procedures. Today, the benefits of fluoride are pretty much accepted worldwide.

Fluoride is a common additive to toothpaste and mouthwash. Many dentists administer fluoride treatments to patients on a regular basis, and fluoride is frequently added to drinking water supplies or used as an additive to table salt in order to increase the element in the diet.1

Fluoride, although not essential, is touted as building stronger tooth enamel and bones, reducing cavities, reducing bone fractures, lowering the incidence of osteoporosis in older women, leading to higher birth weights and higher rates of growth in children, and reducing hearing losses (caused by otospongiosis of the inner ear). In addition, fluoride also benefits blood, skin, hair and nails.2 But fluoride consumed in excess has a dark side.

When the Centers for Disease Control and Prevention (CDC) nominated water fluoridation as one of the top 10 public health achievements of the 20th century, it published a graph (Figure 1), 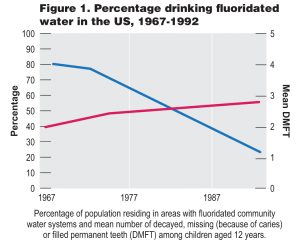 which showed the reduction of cavities in US children coupled with the increase in the number of public water systems that had adopted fluoridation since the 1960s. The CDC referred to the graph with the following statement:

“…as a result (of water fluoridation), dental caries declined precipitously during the second half of the 20th century.”3

What the CDC failed to mention, however, was that similar declines in tooth decay had occurred in virtually every western country, most of which did not fluoridate (see Figure 2). Should this be considered evidence of the effectiveness of ingested fluorides on preventing tooth decay, or was it a misinterpretation of coincidental data? 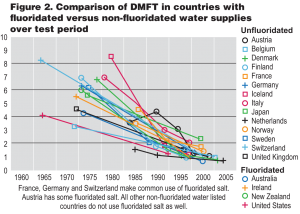 Fluoride is toxic. It is an ingredient in many insecticides and rat poison. It is classified as a Class 4 (very toxic) poisonous substance. The average person becomes a piece of history if they consume about a quarter of a gram. In addition, many people show the effects of fluoride poisoning by consuming only about 1.5 times the recommended daily allowance (RDA).

Fluoride has never received Food and Drug Administration (FDA) approval. It is listed as an ‘unapproved new drug’ by the FDA and as a ‘contaminant’ by US EPA. The type of fluoride salt used in municipal water treatment is a hazardous waste product generated by the aluminum and phosphate fertilizer industries.

When the fluoridation program began in the 1940s, the ‘optimal’ level of fluoride exposure for dental benefits was set at one mg/day for an adult male (presumed to drink only one liter of water a day)—other dietary sources of fluoride were very scarce.

Municipalities fluoridate at between 0.7 and 1.2 ppm. That’s 1.4 to 2.4 milligrams of fluoride packed into a two-liter-a-day water diet. This runs well below the current suggested ingestion levels of 3-4 mg/day for average adults;4 that is, if water was your only source of dietary fluoride. In addition, the correct amount of fluoride for any individual is dependent on body weight and diet. Children and infants require far less fluoride.

Bottled beverages (be it wine, beer, juice or soda) will reflect the average fluoride content of the water from which they were made. Wine is even higher because most crops use Cryolite, a pesticide synthesized from fluoride.

Processed cereals show up to 6.3 ppm of fluoride. Fish averages over two pm, but shellfish can be over three ppm, and canned fish can be over 4.5 ppm. Fluoridated salt contains about 250 ppm. Toothpaste may be over 10,000 ppm.

If it’s a vegetable or if it contains water, you are most certainly being exposed to additional fluoride. Even organic farmers are allowed to use fluoridated pesticides, and the use of these products has increased since the death of DDT. It’s not just about tap water any more. When a small child swallows a pea-sized gob of fluoridated toothpaste because it tastes like candy, he/she gets more than his full dose of fluoride for the day.

US EPA has established a maximum level of fluoride in drinking water at four ppm. Above that level, individuals are at risk of developing crippling skeletal fluorisis, an embrittling of the bone structure that can lead to weakening and increased incidents of fracture.

A secondary level (desirable) is set at two ppm. Above this level, children are likely to develop dental fluorosis, a brown- stain mottling of permanent teeth. US EPA says that this is only cosmetic. Dental fluorosis, however, is only the first visible sign of fluoride poisoning, and other neurological damage has probably already been done.

Here is what some experts in the field of medicine have to say about fluoride:(5)

•“Fluoride is a persistent bioaccumulator and is entering into human food and beverage chains in increasing amounts.” Marier, J. Rose. (1977) Environmental Fluoride National Research Council of Canada. NRCC No. 16081.

My take: fluoride is absorbed by teeth and bones and stays with us a long, long time. Many of the issues with excess fluoride consumption are due to its accumulation over time.

My take: fluorosis, caused by excess fluoride, is increasing even in areas that do not fluoridate water. This simply confirms the increase of fluoride in everything we eat or drink.

•“The majority of children in this research study drank water with the optimal fluoride level (0.7-1.2 ppm) and overall 34.5 percent had definitive fluorosis.”

•”Current standards for water fluoridation in the United States have stood since 1962. Many things have changed since then, however, and these data suggest that perhaps it is time to reconsider these standards.”

My take: Fluoridated water has served its purpose and it is time to move on without it.

Here are 10 interesting and well-documented facts about fluoride:6

When water fluoridation first started, it was about the only real source of fluoride in the diet. Most studies were done with sodium fluoride addition. Now, fluoridation is done with fluorosilicic acid and sodium silicofluoride as well. These are actually industrial waste products from the fertilizer and aluminum industries.

A recent study from the University of North Carolina showed that use of fluorosilicic acid (FSA) in water that is chlorinated can leach higher levels of lead from brass joints and piping. A University of Maryland study suggests that fluoridation can increase the blood lead levels in residents of older homes (containing lead pipes).

In addition to the concerns raised by the effects of excess fluoride on the skeletal, dental and dermal members of the human body, there are serious inferences now being leveled at general health, particularly mental health. Fluoride’s ability to damage the brain represents one of the most active areas of research on fluoride toxicity today.8

In a study by the US Department of Health and Human Services (USDHHS) published in 1991, the agency was already aware that the general public was overexposed to fluoride (see Table 1).9

Medical science is finding damning evidence that elevated exposure to fluoride can be associated with IQ deficits in children. Researchers have found that fluoride accumulates in the brain of the fetus, causing damage before birth.

Elevated fluoride ingestion has also been linked to increased aluminum accumulation in the brain, which is now linked to Alzheimer’s in adults. These conclusions are not just from the isolated study here and there. The data is absolutely overwhelming.

I have carefully referenced my information sources for this article. Please verify this information for yourself and consider yourself warned. There is little if no evidence supporting the continuation of public water fluoridation, and there are volumes supporting its ban.

It is not surprising that the American Medical Association is recommending that baby formula be prepared with non- fluoridated water, and American dentists are moving away from

their support of fluoridated toothpaste and other dental hygiene products containing fluorides. My own dentist no longer does routine fluoride treatments as part of the cleaning process.

So we have another contaminant in our drinking (and cooking and bathing) water. Part 2 of this series will discuss, in depth, the methods for removing fluoride from the water supply.

About the author
S C.F. ‘Chubb’ Michaud is the CEO and Technical Director of Systematix Company, Buena Park, CA, which he founded in 1982. An active member of the Water Quality Association, Michaud has been a member of its Board and of the Board of Governors and past Chair of the Commercial/Industrial Section. He is a Certified Water Specialist Level VI. He serves on the Board of Directors of the Pacific WQA (since 2001) and Chairs its Technical Committee. A founding member of WC&P’s Technical Review Committee, Michaud has authored or presented over 100 technical publications and papers. He can be reached at Systematix Inc., 6902 Aragon Circle, Buena Park CA 90620; telephone (714) 522-5453 or via email at cmichaud@systematixUSA.com.