Initially developed in the 1950s, by the 1980s, RO residential water treatment was beginning to become popular. The introduction of NSF/ANSI 58—Reverse osmosis drinking water systems in 1981, as well as the development of automatic shut-off valves, helped to bring RO to the mainstream as a consumer drinking water treatment technology.

RO systems today are sold through water treatment dealers, with a considerable number also marketed through big-box stores in the US. Internationally, RO is one of the leading technologies in consumer drinking water treatment.

In order to function properly, RO systems require a significant number of components. Typically, pre- and post-filters, membranes, automatic shut-off valves, storage tanks and faucets are all integral parts of modern POU RO systems. The test methodologies developed for evaluation of contaminant reduction capabilities of these systems have been developed based on specific functionality of the technology.

Membranes
RO membranes reject ionic contaminants dissolved in water, while allowing water to pass through. The rejection efficiency depends on chemical properties of the membrane, net driving pressure of the system, electrical charge of the ions, size of the ions, system crossflow, water temperature, water chemistry and other factors.

Ions that have less electrical charge and are smaller in size may more easily pass through the membrane than those that have more charge or are larger. With this in mind, NSF/ANSI 58 requires that all RO systems be evaluated for ionic rejection capability. The test uses deionized water to which 750 mg/L sodium chloride is added.

Sodium chloride is used for testing because sodium is monovalent (Na+), as is chloride (Cl–), when dissolved and dissociated in water. Also, the ions are relatively small in ionic size. Given these properties, the use of sodium chloride creates conservative and repeatable tests. All RO systems conforming to Standard 58 must reject at least 75 percent of sodium chloride ions, with the resulting claim being total dissolved solids (TDS) reduction.

Additional Claims
There are many ionic contaminants in water. These ions can be effectively rejected by RO membranes. Some of these ions, such as chromium, lead and perchlorate, are health concerns at high concentrations. NSF/ANSI 58 includes requirements for testing contaminant reduction performance of a number of these contaminants (See Figure 1). 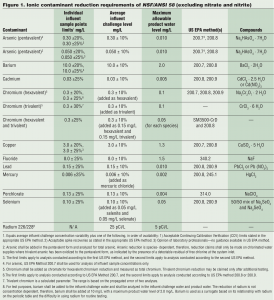 Note that requirements for testing reduction of pentavalent arsenic are included, but there is no mention of trivalent arsenic. RO has only limited effectiveness in rejecting trivalent arsenic, which is not sufficient to make a claim under the standard.

Keeping in mind that RO can also serve as an effective mechanical barrier, NSF/ANSI 58 includes requirements for testing for claims of asbestos, cysts and turbidity reduction.

Testing duration
With proper prefilter maintenance, and on the right water supply, RO membranes can last for several years. This long life makes testing an RO system through the entire replacement cycle of the membrane impractical.

Instead, RO systems are evaluated according to a seven-day protocol that subjects the system to a variety of usage patterns. Complete tank draws, partial tank draws and a stagnation period are all incorporated into the evaluation. A complete description of the protocol is included in Figure 2. 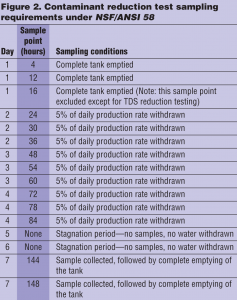 The system production rate is measured during a complete tank fill, and when filling the tank from the point where the automatic shut-off valve first turns on. The 750-mg/L sodium chloride TDS reduction test water is used. Daily production rate is calculated as an average value based on these two operational conditions, expressed as volume per 24 hours. For systems that do not include a storage tank, the measurement is similar but adapted to systems without a tank.

Membrane isolation
NSF conducted studies in the late 1990s to determine the influence of carbon prefilters and/or postfilters on RO system contaminant reduction performance. These studies indicated that in some cases, there was significant influence. Most notable of these was mercury.

Subsequent to this change, there are no RO systems certified by NSF for reduction of mercury.

Unique nature of nitrate/nitrite
Nitrate and nitrite exist in chemical equilibrium—there is always some of each present. The balance of the equilibrium depends on water chemistry. US EPA regulates the two contaminants together because of this equilibrium. Likewise, NSF/ANSI 58 requires that the two must be tested together, and testing must be successful for both in order to make a single claim of nitrate/ nitrite reduction. Details of this claim are included in Figure 3.

Technology-driven test methods
RO is a unique water treatment technology, with specific advantages, capabilities and limitations. The NSF Joint Committee on Drinking Water Treatment Units recognizes these, and specifically developed the test protocols in Standard 58 to reflect the technology and its mode of action in water treatment. By specifying inlet pressures, operational requirements, product configurations and sampling schedules, the protocols create appropriate tests of these systems to conservatively verify their performance when used to treat residential drinking water.

About the author
Rick Andrew is Operations Manager of the NSF Drinking Water Treatment Units Program for certification of POE and POU systems and components. Prior to joining NSF, his previous experience was in the area of analytical and environmental chemistry consulting. Andrew has a Bachelor’s Degree in chemistry and an MBA from the University of Michigan. He can be reached at (800) NSF-MARK or email: andrew@nsf.org