Hayes elected to PMI Board

Solutions, was elected as a director-at-large for the Plumbing Manufacturers Institute (PMI). Board members are elected by the membership at the fall PMI meeting for three-year terms that start the following year. The 22-year company veteran has served on a wide variety of industry standard development committees, as well as having authored several hundred trade press articles and papers over the past ten years. Representing manufacturers across the plumbing industry, the PMI Board steers the activities of the institute.

Robert Roodman, P.E., was honored with the Activated Carbon Hall of Fame Award at the 24th International Activated Carbon Conference in October. He has a long and well-recognized record on the manufacture and regeneration of used activated carbons from myriad applications. The 25-year industry veteran specializes in carbonization, pyrolysis, gasification and activation developments.

Hanovia appointed Halim Mirza as Global Business Manager for industrial markets such as food and beverage processing, pharmaceutical and micro- electronics manufacturing and specialist healthcare applications. Prior to joining Hanovia, he held various positions in management, technical sales engineering and international business development with Elga Process Waters. With a BSc in Chemical Engineering and an MSc in ion exchange and membrane technology, Mirza is a Chartered Engineer and a member of the Institute of Chemical Engineers.

VRTX Technologies’ CEO David Nicholas was reappointed to serve on the Environmental Technologies Trade Advisory Committee (ETTAC) as a representative of small- to medium-sized business, and the water and wastewater treatment segments of the environmental industry sector. ETTAC is an advisory committee for the Secretary of Commerce and the Trade Promotion Coordinating Committee (TPCC), created to advise the US government on environmental trade policies and programs, and to help focus resources on increasing exports of the US environmental industry.

Schuler appointed to WEF Board

GE Water-Municipal (US) Vice President Paul Schuler was recently nominated for the Water Environment Federation (WEF) Board of Trustees. He was voted into the appointment in October, 2009.

Gary Hatch, Ph.D., former Director of Research and Development at Pentair Residential Filtration,  has joined the PACS consulting group. He was inducted into the International Activated Carbon Conference Hall of Fame in 2005. Hatch has over 35 years of experience in POU/POE water treatment, products and systems, and has been awarded 12 patents. He has been widely published in the American Chemical Society and American Water Works journals, WQA and WC&P.

Imad Makhzoumi, COO of Future Pipe Industries Group, has been elected President of the International Desalination Association for 2009-2011. During the past decade, he has participated in many inter- national and regional committees responsible for the development for safe use of fiberglass non-corrosive pipe systems in high temperatures and pressures within desalination plants. An IDA member for more than 14 years, Makhzoumi served as a Director for the last eight years and, prior to his election as President, served as second Vice President. He was a member of the Organizing Committee for the IDA World Congress in Dubai, as well as the Operations and Strategic Planning Committees. Previously, he was Chairman of the IDA Membership and Elections Committee.

Robert Adamski was the recipient of Water For People’s 2009 Robert W. Hite Outstanding Leadership Award in October 2009. The annual award recognizes an individual who models the best in leadership with innovation, creativity and commitment to the principles of Water For People. Adamski serves as Vice President of municipal infra-  structure programs for international planning, design and construction management firm Gannett Fleming. He is responsible for providing consulting assistance to municipal water and wastewater system owners in the areas of facility operations and maintenance and utility management. Adamski previously served two terms on the Water For People board and has been active in their World Water Corps volunteer program. A registered professional engineer in New York and New Jersey, he is also a board- certified environmental engineer, and a fellow in the American Society of Civil Engineers and the Society of American Military Engineers. He holds a Bachelor of Science Degree in civil engineering from the City College of New York.

Koch Membrane Systems (KMS) has hired Dr. Hamid R. Rabie as Senior Vice President of Technology, reporting directly to company President David H. Koch. Rabie will manage all research and development activities  within the company, oversee process design work in the US, and will continuously review the process design activities in Europe. The 12-year veteran of membrane water and wastewater treatment is regarded as a fiber-spinning expert who will also play a primary role in dealing with technology development. Rabie has held senior positions in technology, manufacturing, research, product development and industrial management, and holds BS, MS and Ph.D. degrees in chemical engineering.

Lenze-AC Tech recently named David Cybulski Vice President of Finance. Previously, he served as Vice President, Finance and Global Controller at KAZ, Inc. Cybulski brings significant experience in manufacturing,  advanced technology and sales/distribution companies, plus extensive international experience to the position. He has over 25 years of experience in finance and holds a BS degree from the University of Hartford and an MBA from Bryant University.

NSPF announced the retirement of Phil Sperber and Joseph Hunsaker from the Board of Directors, effective November 1, 2009. Both had volunteered their time and expertise for over 20 years. John Puetz was elected President of the Board, succeeding Cory Willis, who served three consecutive one-year terms ending October 31, 2009. Puetz previously served as Treasurer of the Board and has held many leadership positions in the pool and spa industry. He is Director of Technology at Advantis Technologies. Bill Kent and Don Witte were re-elected, Kent as Secretary and Witte as Treasurer. Three new members were also appointed to serve: Bruce Dunn, President of Mission Pools, Scot Hunsaker, President of Counsilman-Hunsaker and Dan Johnson, President of Swim, Incorporated. 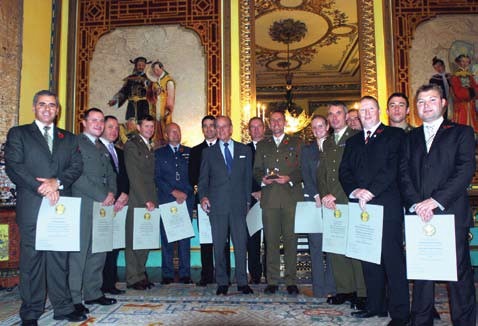 Dr. Alex Antoniou, Ph.D., Director of Educational Programs for the National Swimming Pool Foundation® (NSPF®), was a member of a special marine conservation team recognized by the Duke of Edinburgh at Buckingham Palace last November. The prize-winning Joint Services Shark Tagging Team (JSSTT), which includes a team of divers from the British Armed Forces, was recognized based on their remarkable efforts and results to provide manpower and resources for shark tagging and other marine conservation projects where diving skills are required.