Arsenic content in drinking water has been regulated in the US since 1942, when the Public Health Service established a standard of 50 parts per billion (ppb). In January 2006, a new standard of 10 ppb was mandated by the US EPA.

Municipal water suppliers in states with higher detectable arsenic levels in groundwater have been investigating technologies to protect water quality and reach compliance with the new regulations. Treating the water to remove arsenic or some other contaminant, however, may reveal other issues that the owner never knew they had, or even create a second set of issues if not handled with care.

Take, for example, a well that has an arsenic level just over the US EPA maximum contaminant level (MCL) of 10 ppb, where the arsenic is in its reduced form of As(III). The well also has levels of iron and manganese just below the US EPA secondary MCL of 0.3 and 0.05 mg/L, respectively. Untreated, these iron and manganese levels may not have caused any issues to end-users.

There are effective arsenic treatment options available. One such option is selective adsorbent, which will remove As(III), but the cost of treatment would go down significantly if the arsenic were oxidized to As(V) prior to removal.

The oxidation, in turn, may also induce some precipitation of iron and manganese. This will cause color issues in the system and may cause the adsorptive bed to foul prematurely with colloidal or particulate metals.

The best solution becomes removal of iron and manganese, perhaps with a greensand filter or similar technology, which will have the added benefit of removing some of the arsenic in the process. Depending on the ratio of iron to arsenic and the other water chemistry, this solution may remove enough arsenic to meet the MCL.

Iron removal can also be augmented with additional ferric chloride to remove arsenic, or a selective adsorption bed can be used for arsenic after the iron treatment. In either case, the water entering the system is much different than it was before treatment—it is lower in iron, manganese and arsenic. But this may only be the beginning when considering other options for treatment that may be available or required with regard to a complete water analysis.

Whether intentional or not, pH of the water before and after treatment can often be different. Since the efficiency of arsenic adsorption decreases with increasing pH, it is often economical to lower the pH of very alkaline water when removing arsenic.

This can be done with the addition of a mineral acid or CO2 gas prior to the arsenic removal system, or along with the ferric chloride when using it as a coagulant for arsenic. After the arsenic is removed, pH can be left in the depressed state or raised back to the initial value or some intermediate, depending on the requirements of the system.

When CO2 gas is used, pH can be brought back up at least partially by dropping the line pressure and allowing the gas to vent, or by stripping the CO2 more completely with air. When a mineral acid is used, pH is often restored by the addition of caustic.

While the absolute pH is of little importance for a new system, it is often important not to shift the pH in an existing system too dramatically to avoid the release of scale in pipes and the problems it would cause downstream. Even if no pH adjustment is planned for the arsenic removal system, it is possible that pH will be affected by the system unintentionally, even if for a short while.

The use of additives (such as oxidants or coagulants) will often induce some sort of pH change, so care should be taken to determine what impact this will have on the overall water system, especially in the case of an overdose caused by a failure of some kind. Likewise, an adsorbent can have residual acid or base associated with it, which may need to be washed out prior to placing the media bed into use.

Unlike the additives, the pH issue with adsorbents is typically short-lived and handled during the initial start up. Adsorptive media most often must be backwashed prior to initial use, either to remove fines or otherwise rinse the media prior to placing it into service. 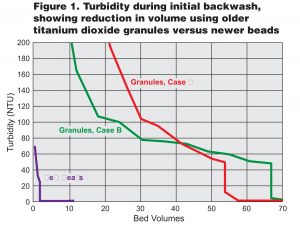 This backwash water must be disposed of, either into a sewer, surface discharge, or by trucking to another site for disposal. In any case, the desire is to keep this backwash volume to a minimum.

For example, a granular adsorption media based on titanium dioxide would typically require about 50 to 75 bed volumes of backwash in order to remove turbidity associated with fines in the product. While disposing of this much water may not be an issue when a sewer is available, trucking this much for a large system could be prohibitively expensive.

Another new adsorption media incorporating titanium dioxide but reformulated using a different process, reduces the required backwash because the product beads are more spherical, more robust, and have less dust on them in shipment than granular media. This new media can be initially backwashed with less than 10 bed volumes of water and often with less than five bed volumes (Figure 1) in order to reduce turbidity to acceptable levels (less than one NTU).

Another issue with using adsorptive media is the ongoing need to perform backwash of the media bed. The most common cause requiring backwash is related to influent water quality.

Any media bed will accumulate debris from the water such as silt, etc., so the amount of debris present will often determine how frequently a backwash is required, if at all. This is most often determined empirically by monitoring pressure drop across the media bed, and backwashing when the pressure drop has increased by some predetermined amount.

A similar pressure drop may also be observed due to compaction or degradation of the media bed itself, even in the absence of foreign debris. In this case, frequency of the backwash event will not depend on the water quality, but instead on the physical nature of the adsorbent chosen and how exactly the system is operated (e.g., what pressure, what duty cycle, etc.)

Regardless of the cause of the required backwash, the water used must be disposed of properly.

Although adsorptive beds have their requisite application issues, in operation they are actually less complex than alternatives, such as iron removal or a coagulation/filtration approach in removing a contaminant. Filter media in the latter applications is normally backwashed frequently—daily or even a few times a day compared to the weekly, monthly or quarterly backwashes required on a selective media filter bed.

In addition to having a larger volume of wastewater, this backwash also contains a higher level of solids that must be dealt with explicitly. This is most often accomplished with some sort of settling pond or tank from which solids are collected and dewatered before disposal.

It is important to note that disposal of any waste (as a solid or liquid) is most often a local issue. Regulations can vary widely. When containing a material such as arsenic, these wastes can be subjected to a variety of tests to classify them as hazardous or non-hazardous.

US EPA recommends using the Toxic Characteristic Leaching Protocol (TCLP) to make such a determination. Many of the selective adsorbents, or waste sludge from coagulation processes, can be classified as non-hazardous, depending on specific arsenic levels and water chemistry.

The state of California uses a similar leaching test, the Waste Extraction Test (WET). But California also requires that the material’s arsenic level be below their total threshold limit concentration (TTLC) for non-hazardous waste characterization.

In principle, any waste stream could be managed to meet this threshold. A recent AwwaRF study showed that only a titanium oxide-based media was able to pass the test when loaded with an arsenic level typical of that found in drinking water requiring treatment.

Even when dealing with ‘nearly perfect’ water, treatment for a single contaminant can raise a lot of issues. Beyond removing the offending species, several water quality parameters can be affected.

Both solid and liquid waste streams may be generated. The end result can still be excellent quality water, though not necessarily the same as what you started with.

Fredrick W. Vance, Ph.D. is a development specialist for Dow Water and Process Solutions, based in Midland, MI that specializes in compo- nent technologies designed to advance the science of water purification. He has a B.S. in chemistry from Hope College and a Ph.D. in inorganic chemistry from Northwestern University. Vance’s recent work has focused on the development and application of Dow’s proprietary me- dia for the selective removal of arsenic from drinking water. He can be reached by e-mail at fwvance@dow.com.

ADSORBSIA media is a high-capacity, non-regenerable, single-use product, suitable especially for small- or mid-sized systems. Eliminat- ing the regeneration step frees operators from the hassles and cost of chemical storage and usage, and from waste stream disposal issues. New ADSORBSIA As500 media from Dow also was developed to reduce backwashing requirements.

Residents of the village of Oak Creek near Sedona, AZ, a city at the southern end of the magnificent Oak Creek Canyon, utilize more than 432,000 gallons (1,640,000 liters) of higher quality drinking water to 3,100 households daily. Residents might not be able to ‘taste’ the difference, but their drinking water has recently gotten a quality boost.