A breakthrough technology to efficiently remove sulfate ions and metal cations from acid mine drainage (AMD) has recently been conceived and developed. The Acid Mine Drainage Value Extraction Process (AMD VEP) is based on a novel adaptation of liquid-liquid extraction.

The process converts AMD to purified water as well as sale- able products such as potassium sulfate and iron sulfate. This results in simultaneous, cost-effective isolation and concentration of useful metals and sulfate ions from mine pool water, which prevents AMD and its negative environmental effects, and with- out generating hazardous waste sludge for landfill disposal.

In Pennsylvania alone, there are 4,600 miles of AMD-impaired waterways. Ohio has an additional 1,300 miles. The AMD VEP process offers coal-producing states and mining companies effective and affordable treatment of their most polluted discharges without producing a residual waste sludge.

Such a system can restore miles of polluted streams and rivers. This will then rejuvenate currently impaired groundwater environments and regional economies. 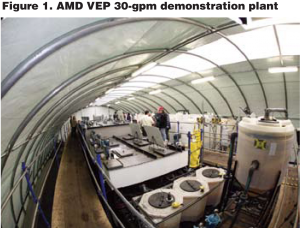 ). The technology was selected to provide inherent kinetic efficiencies to achieve a small-facility footprint and used chemical engineering, low-energy and robust design principles to enable an economic water purification process scalable from 30 to 5,000 gpm (18,927 L/m) as a single equipment train. Converting metal and sulfate pollution to saleable products is an added value.

AMD VEP technology
AMD water, laden with sulfate and iron, feeds into the water purification stages where the AMD water is sequentially contacted in a counter-current flow path. An extractant solution formulated to efficiently pull these ions from the aqueous phase is conducted in the extractant phase (Figure 2). 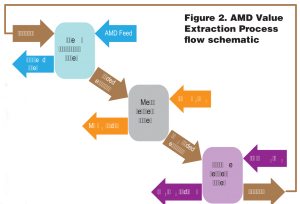 After passing through the water purification stages, purified water exits the process. Then it can be discharged to a stream, reused as clean process water, or fed to a municipal drinking water plant.

The Water Purification Stages are composed as a set of four mixer-settler units, which are two-compartment tanks. In the first compartment, a mixer pulls the extractant and the water into a mixing chamber. The two fluids are intimately mixed with a residence time of 60 to 90 seconds.

From the mixing chamber, the combined effluent flows into the settling chamber where the organic extractant phase disengages from the water phase. The extractant, containing the iron and sulfate ions, overflows an exit weir in the settling chamber, and is separated cleanly from the water phase, which underflows the same weir and exits as a separate stream with proportionately less iron and sulfate.

The metals-recovery stages are a set of two to three metal cation recovery tanks. The extractant flows counter-clockwise with an aqueous sulfuric acid solution to form an iron sulfate concentrate that is harvested for reuse. The sulfuric acid and extractant are mixed and separated in a similar manner to that in the mixer-settler tanks of the extraction section.

The sulfate-recovery stages remove sulfate from the extractant, which again flows through a series of mixer-settler tanks in a counter-current fashion. The extractant is contacted with potassium carbonate (a basic aqueous solution) to produce a potassium sulfate concentrate.

The extractant exits the last mixer-settler of the sulfate- recovery section regenerated and ready to contact a new stream of AMD feedwater in the water purification stages. The potassium sulfate concentrate leaves the sulfate-recovery stages and is collected and stored for sale or reuse in a potassium sulfate product tank.

Operational advantages
One major advantage of AMD VEP technology is that it generates purified water that can be within drinking-water standards for iron and sulfate, while converting iron and sulfate removed from the water into usable products, such as iron sulfate and potassium sulfate. As a result, AMD VEP does not have a significant waste stream leaving the process.

The demand for fresh water is increasing with population and industrial production growth. Yet sources for fresh water are relatively fixed, and water quality is stressed by a variety of pollution sources, with AMD being a significant contributor. AMD VEP technology provides a solution to AMD-impaired water, especially to those sources tainted with the highest levels of inorganic contaminants (such as iron, sulfate) and other mining-related cations and anions.

Investing in strategically placed AMD VEP treatment plants could make significant improvements in overall regional water quality of mine-intensive states by reducing pollution loading from the most concentrated AMD inputs. This reduced loading also would extend the useful life and improve effectiveness of passive treatment systems downstream in the watershed. The result would be a recovery in water quality and subsequent improvement in watershed ecology.

Conclusion
From an economic standpoint, AMD VEP technology produces high-quality water and recovers removed iron, sulfate and other ions as marketable products. For example, purified water is needed in water-intensive industries (such as the oil and gas industry) to harvest native energy resources.

Using water purified from an AMD source removes pollution from a watershed and conserves regional high-quality water reserves for other industrial or municipal applications. Therefore, the technology can deliver greener production of not only coal, but also oil and gas through purification of AMD-impaired water, which then allows it to be used in oil and gas production.

About the author and company
Michael von Fahnestock is a Program Manager and Chemical Engineer with Battelle, and can be reached at fahnesto@battelle.org or at (614) 571-7130. Headquartered in Columbus, OH, the company oversees 20,400 employees in more than 130 cities worldwide, including seven national laboratories that Battelle manages or co-manages for the US Department of Energy and the US Department of Homeland Security, as well as two international laboratories—a nuclear energy lab in the United Kingdom and a renewable energy lab in Malaysia.

The St. Michael facility was developed with funding from Winner Global, LLC in Sharon, PA, and the Pennsylvania Department of Environmental Protection. Winner Global is launching a business based on the AMD VEP technology for mining and environmental companies in the US and internationally.