Residential Use of Hydrogen Peroxide for Treating Iron and Hydrogen Sulfide

Two common problems found in well water are iron and sulfur. Iron (Fe+2) can discolor the water, spot laundry and stain plumbing fixtures. In addition, the growth of iron-related bacteria sometimes present with iron can result in abnormal taste and odor and contributes to biofouling in plumbing systems.

Hydrogen sulfide (H2S) is characterized by a rotten-egg odor and metallic taste. There is never any doubt as to when it is present due to its offensive odor. It promotes corrosion due to its activity as a weak acid; further, its presence in air causes silver to tarnish in a matter of seconds.

There are many methods that dealers incorporate today to treat iron and hydrogen sulfide. Some of these include ozone, air injection, catalytic media and chlorine. Hydrogen peroxide (H2O2) is another method that can be used and has gained a lot of popularity because it is easier to handle, is a more powerful oxidizer and, in most cases, doesn’t require a contact tank. This translates to lower operating cost compared other types of chemical feed applications.

Hydrogen peroxide particulars
Hydrogen peroxide is a ”weak acidic, clear, colorless fluid, easily mixed with water in all proportions.” It is a clean oxidant that decomposes to H2O and O2, or more simply put, water with extra dissolved oxygen.

Hydrogen peroxide also occurs naturally. Our own bodies produce it naturally as a first line of defense against every single invading organism. Levels of 210 – 720 ppb have been reported in the breath of a normal healthy individual. It can also be found in coffee we drink and honey we eat.

Hydrogen peroxide is one of the most power oxidizers available. It is stronger than chlorine and potassium permanganate. Through catalysis, H2O2 can be converted into hydroxyl radicals (OH) with reactivity second only to fluorine. 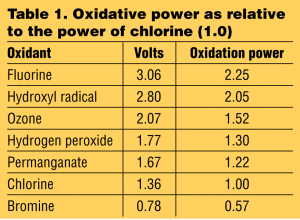 Safety measures
As with any other oxidant, safety still needs to be considered when handling this product. Hydrogen peroxide of less than eight percent strength is considered non-hazardous. Most dealers today using hydrogen peroxide are using it at a seven percent concentration.

As a result, it can even be shipped through normal processes. This also means it can be safely delivered by a company vehicle without needing special registration or labeling on the truck.

There are many chemical supply companies that can provide it already mixed to a seven-percent solution. If you are delivering higher concentrations, check local and state regulations to determine what is required for proper registration and labeling.

Peroxide is very reactive above this level and requires extra care to handle it and, due to Homeland Security regulations and the quantity that might be kept at a facility, it can be purchased only at concentrations under 35 percent. (We purchase and store 34 percent concentrations at our facility and properly mix it to a seven-percent solution.)

Handling procedures
Whether you are handling a seven- or 35-percent solution, ensure that proper safety is used to handle and dilute. There are safety videos available from many of the suppliers and manufacturers of hydrogen peroxide.

The use of safety goggles to cover the eyes and protective gloves and aprons that are not affected by peroxide should always be used for proper handling while dispensing into containers. Leather gloves, for example, are not recommended for handling high concentrations of peroxide. It is very reactive to leather and can actually cause leather to ignite, even though peroxide itself is not flammable.

Customers should never be allowed to handle or dilute peroxide for safety reasons and for the risk of liability of the company providing it. The solution should be provided in a container that has a safety cap attached to prevent children from accessing it and should be properly vented.

Dilution procedures
Many dealers are purchasing 35 percent technical grade peroxide for diluting and using four gallons of water to one gallon of 35 percent peroxide. This works out to a 5.5 percent solution. Dealers should use this figure (5.5percent or 55,000 ppm) for the listed calculations listed to determine chemical feeder size and settings. Many chemical suppliers have seven-percent peroxide already available or can make it up in many cases. Be sure to determine what peroxide strength is being used and adjust for the calculations when sizing and setting chemical feeders1. It does not work as a simple ratio, however. Dilution calculations are only easy when you’re in the middle of a chemistry class in college. It would require a complete, separate article to provide a refresher course in chemistry to go through the calculations to determine how to properly dilute. Dealers need to know variables such as the density of water at different temperatures, as well as the densities of peroxide at the different dilution concentrations.

Again, the best course of action here is to contact the chemical supplier to either help determine the method of dilution or see if they will dilute the peroxide to your requirements. There are also companies available that are diluting and pre-packaging containers of seven-percent peroxide and making it available to dealers. 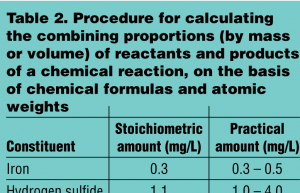 NSF grade is not readily available and is usually only found in concentrations of 35 percent. As soon as you dilute it, it would no longer be considered NSF grade.

A carbon filter is always incorporated to catch precipitated elements and remove any remaining peroxide residuals much like a chlorination system does. As such, it is acceptable to use food or technical grade unless it is to be used with a public water supply. In those cases, you may have to contact local authorities to determine if the NSF grade must be used.

It is important to know your actual concentration when setting up and properly dosing the required amount needed for the application. For those who dilute using a ratio of five parts water to one part of 35 percent peroxide, the resulting concentration is actually 4.6 percent.

This is assuming a water quality to dilute that is equal to one-two meg-ohm is being used. A double-pass RO system can achieve this type of quality.

Using water from a typical RO system will reduce the concentration and stability slightly. Generally speaking, hydrogen peroxide is stable with a decomposition rate of one percent per year when properly handled and stored.

Removing iron and sulfide
From this point, it is relatively easy to set up a system to remove iron or sulfide from water, limiting the maximum amount of iron to be treated to 10 mg/L of iron when using peroxide.

Peroxide systems for iron removal should be limited to less than 10 mg/l. Many problems will occur at higher levels. Hydrogen sulfide does not react the same way and there are no limitations to the amount that can be removed. Dealers have found great success when needing a system that can remove very high levels of hydrogen sulfide.

Limit applications to 20 mg/L unless you have support from companies with experience handling higher levels. The following table can be used as a guideline for the proper dosage of peroxide needed for each milligram per liter of either iron or hydrogen sulfide to be treated.

When compared to other oxidants such as chlorine and potassium permanganate, the dosage of peroxide needed is significantly less. Additional information needed to determine the chemical feed rate is gallons per minute (gpm) to be treated. With the gpm, total amount of iron and/or hydrogen sulfide known and the concentration of the peroxide solution to be used, you can use the following to determine the chemical feed rate required to treat the water.

Most dealers use a peristaltic pump to inject the peroxide solution. It is not affected by the off-gassing of oxygen from the peroxide. It can be more difficult to use a positive displacement diaphragm pump because of off-gassing that could result in a loss of prime and prevents the peroxide from being injected.

The chemical feeder is usually set up to operate in conjunction with the homeowner’s well pump and is injected ahead of the pressure tank. The use of a static mixer (motionless, in-line mixer) is used in some cases to speed up the reaction of peroxide to oxidize iron and/or sulfide.

The static mixer becomes the injection point. It is unusual to use a contact tank with peroxide. The reaction rates are so much faster than other oxidants that it is usually not necessary. When using a contact tank, keep it smaller for just a few minutes of contact time.

Larger contact tanks have no additional value since peroxide breaks down much faster in water than other oxidants. In some cases, the use of a flowmeter or meter for proportional feed is used instead of the well switch.

This type of set up requires a little more time to calculate feeder dosage rate and can create more problems and maintenance needs than the first method discussed. As with other oxidants, pH and other factors need to be considered and addressed as with any other system.

Water filtration
The final step required is to filter the water of the precipitated elements and any peroxide residual just like a chlorine injection system. Carbon is recommended and always used with peroxide injection.

Use of oxidizing or catalytic media other than carbon is not recommended. Media containing manganese dioxide such as Birm® or Pyrolox can be rapidly destroyed and create other problems if improperly applied.

Many dealers use catalytic carbon to filter and remove peroxide residuals. It rapidly breaks down peroxide as it passes through the bed, which will usually ensure no carryover of peroxide to service. 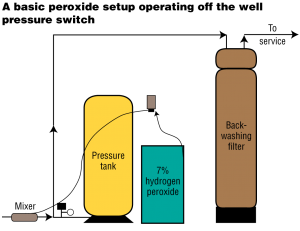 There are a variety of different types of carbon available, such as coconut shell, that has been used successfully with peroxide. With any type of carbon filter:

With proper steps taken prior to installation, peroxide can offer a great alternative to other solutions when handling difficult iron and hydrogen sulfide problems. Despite peroxide’s power, it is safe and versatile to use and decomposes into water and oxygen. It will provide iron- and sulfur-free water naturally, without using harmful chemicals.

About the author and company
Scott Crawford, CWS-VI, is currently Director of Engineering for Engineering Specialties (A/K/A Water Specialties Group, Inc.) in Bensenville, IL. Engineering Specialties is dedicated to helping dealers and others with problem water applications around North America. They offer testing and consulting services, in addition to innovative products such as the Oxylox System using hydrogen peroxide that was previously tested and validated by the Water Quality Association. He can be reached at (800) 807-2300 or by e-mail at [email protected].