Infrared Fiberoptic System for Online Monitoring of the Quality of Water

Globalization, rapid urbanization, urban waste generation, rising industrial and agricultural activities and other concerns have caused increased pollution of water resources. There has been a growing demand for sustaining the quality of water and maintaining public health.

It is essential that we monitor contaminants (such as volatile organic compounds [VOC)]), whose source is industry or agriculture and whose effects are ‘long term.’ It is also necessary to detect the presence of hazardous chemicals that may be introduced by accidental spills or by natural causes (such as hurricanes) and whose health effects are ‘short term.’ The threat of chemo-terrorism has also emerged worldwide during the last few years.

In each of these cases, monitoring systems should allow online monitoring in remote locations, be sensitive, selective, robust, affordable and easy to operate. There is a need to detect such contaminants in concentrations lower than one ppm levels.It would be extremely useful if the monitoring system could identify contaminants and distinguish between highly toxic ones (e.g. organophosphates) and less-toxic ones (e.g. halogenated hydrocarbons).

Most systems available today are based on sampling and not on continuous monitoring. Many of these systems are likewise designed to detect only one type of pollutant.

Our research goal was to develop an infrared fiber-optic system that will continuously monitor the quality of water in situ and in real time. This system would, therefore, detect, identify and determine concentrations of contaminants that may pose a threat to public health. It would serve as part of an early warning system to monitor the quality of water in water supplies or distribution systems

Fiberoptic infrared spectroscopy
The absorption of many organic and inorganic materials in the middle infrared (mid-IR) spectral range, from three to 25 µm, is highly characteristic and is often called a ’fingerprint.’ Water has a characteristic absorption spectrum, as does each of the above-mentioned contaminants.

By measuring the spectrum of an aqueous solution, one can distinguish between pure water and contaminated water. In principle, the absorption spectrum of the solution may reveal the nature of contaminants and their concentration; this is true even if there are many contaminants in the solution.

Several types of spectrometers can be used to measure absorption in the mid-IR, including grating spectrometers, Fourier transform infrared (FTIR) spectrometers and tunable IR lasers. In all these cases, one can in principle take a sample of polluted water, place it inside the spectrometer and carry out measurements.

The main problem is that water has an extremely high absorption in the mid-IR and, therefore, only a very thin sample is needed, which complicates the measurements. In addition, it would be infinitely better to carry out measurements on water in situ and in real time.

The solution we researched and developed is to use a method called fiberoptic evanescent wave spectroscopy (FEWS), which relies on optical fibers that are highly transparent in the mid-IR. The Applied Physics Group at Tel Aviv University (TAU) has developed special optical fibers made of silver halides (e.g. AgClBr), which are flexible, non-toxic, non-hygroscopic and highly transparent in the mid-IR.

There are very few groups that have similar fibers. These IR fibers can be coupled to mid-IR spectrometers, making it possible to measure the absorption spectra of aqueous solutions in an area remote from the spectrometer and in real time.

Development of a field deployable prototype
A schematic drawing of such a typical sensor for online monitoring (Figure 1) has been developed. The FEWS system for online monitoring of water is comprised of two fibers coated with plastic that serve as IR cables. A short, exposed fiber segment serves as a sensor. 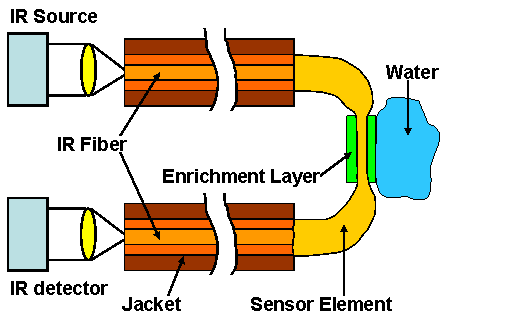 One key element has been the development of the U-shaped sensor head (Figure 2). It has two arms that are well-protected by a plastic tube, with the exposed AgClBr fiber at the center brought in contact with water. The sensor head is easily connected to an FTIR system. The yellow line on the right is the IR transmitting fiber.

Figure 2 The sensor head. The yellow line on the right is the exposed segment of AgCIBr fiber that serves as a sensing element 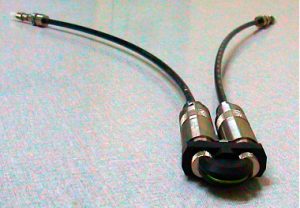 Preliminary experiments
Experiments were carried out in boreholes in Munich, Germany and Vienna, Austria with participation of researchers from IPM in Freiburg, Germany and from the Technical Universities of Munich and Vienna. A fiber of six meters (19.68 feet) in total length was used. The fiber was shaped like a ‘U’ and 10 cm (3.94 inches) at its center served as the sensor element. They were left exposed, whereas the two legs of the ‘U’ served as IR cables and were covered with a protective Teflon tube.

An FTIR spectrometer was used for the absorption measurements. The sensor element was introduced into the aquifer at the bottom of the hole. Tetrachloroethylene (PCE) was introduced as methanolic solution into a special compartment near the gravel-filled bed, which was already filled with cold water. Analyte eluted from the gravel bed into the well where the sensor head was placed.

Monitoring was carried out continuously for two days and the FEWS system proved effective. Measurements actually started after a delay of 200 minutes when the analytes first reached sensor. Then, naturally, concentration of the chemicals was slowly increased.

In parallel, samples of water were periodically removed from the aquifer and concentration of PCE was measured using standard gas chromatography (GC) (Figure 3). Quantitative results of the FEWS method were very similar to ones obtained by standard GC, with preliminary results indicating great potential of the system for online monitoring of pollutants in situ and in real time. 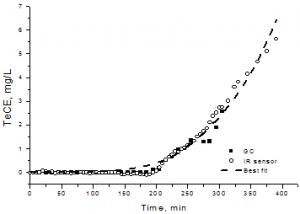 Pesticide measurements
Another example of the capabilities of the systemwas tested when aqueous solutions of highly toxic pesticides were injected into water. Solutions of 2,2-dichlorovinyl dimethyl phosphate (DDVP), parathion and diazinon in concentrations 0.5 to 30 ppm were prepared for the test.

In each case, IR absorption spectra were measured (Figure 4). It is clear that each pesticide has a characteristic absorption spectrum and that one can use the method for detecting and identifying pesticides in concentrations of less than one ppm (or possibly even lower).

Figure 4 Absorption spectra of different concentrations of pesticides in water: (a) DDVP, (b) diazinon (c) parathion.

Future research
Initial research measurements were carried out using a large, expensive FTIR not designed for fieldwork. Future research should be conducted with a smaller and more robust FTIR that is less sensitive to moisture. Such a mini-FTIR will make it possible to construct a compact and rugged FEWS system that can be used in the field.

There are also several ways of increasing the sensitivity of the FEWS system. Some of these depend on the geometry of the sensor element. For example, flattening the center of the element can increase the sensitivity by a factor higher than 10.

There are other methods that chemists use to increase sensitivity, which need to be researched. For example, the sensor element could be coated by an ‘enrichment’ layer that will allow molecules of pollutant to penetrate to the vicinity of the sensor element, but will not allow water molecules. This leads to an increased sensitivity. Several mathematical methods could also be used in order to increase sensitivity and also make it possible to detect one pollutant in the presence of others.

Tunable IR lasers emit a very high intensity, but cover only a very limited range. They are, therefore, most suitable for detection of a specific pollutant, though they can detect this pollutant with a very high sensitivity.

Applicability
It is expected that this novel FEWS system will have many applications. Itwill be highly useful for environmental protection and it will also contribute to water security in the face of global terrorism.

Such a system would be quite useful in many fields and in many countries, and could be used for monitoring of treated wastewater, irrigation water and drinking water. It could also monitor the quality of water online in water reservoirs, rivers, lakes and surface or groundwater.

About the author
Professor Abraham Katzir is a leading global expert and reasercher on water quality issues at Tel Aviv University in Israel. Dr. Katzir serves as the head of the Applied Physics Group, focusing on infrared fibers and lasers in science, medicine, industry, environmental protection, astronomy, homeland security and water quality and protection. He can be reached by telephone at ++ 972 3 6408301, by fax at ++ 972 3 6415850, or by email at katzir@post.tau.ac.il. You can also visit the university website at www.tau.ac.il/~applphys.