Please Don’t Poop in the Pool! 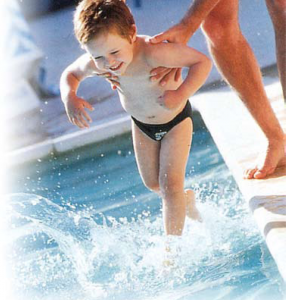 When it comes to swimming pools, poop happens- a lot! Fecal accidents in aquatic venues are common, especially among diapered children and toddlers.

Swim diapers are not leak-proof and may contain some of the fecal matter. They are not considered effective for keeping fecies out of the pool.1

On average, bathers can add up to several pounds of feces per day in a typical water park.2 If the fecal content originates from an ill person, there may be significant health risks to other bathers.

Recreational waterborne disease outbreaks are at an all time high in the US, with 78 outbreaks occurring from 2005 to2006 and 74 percent of these from treated water venues. Sometimes the culprit is a poorly maintained pool. But other times outbreaks could be easily prevented by ensuring bathers practice proper pool hygiene.

Commonly contaminated pools
Swimming is the most common activity among children and the second most common exercise activity in the US, with 8.8 million residential and public swimming pools on record. More than 368 million person visits to swimming sites occur each year.

Diarrhea is also common in the US. Approximately 11 percent of the population reported symptoms of diarrhea in the past month.3 This rate indicates that, on average, at least one diarrheal incident occurs per person per year. Recent studies indicate that persons with symptoms of diarrhea often continue to swim, unaware of their ability to spread disease to others in the pool.

Two recent outbreaks exemplify the lack of awareness relative to diarrhea and swimming pools. The first, an outbreak of more than 200 swimmers in Nebraska in 2000 involved two pools contaminated with Cryptosporidium. The outbreak continued to occur even after the implicated pools were taken out of service.

Epidemiological surveys indicated that 18 percent of ill persons did not refrain from swimming despite active diarrheal symptoms. Thirty-two percent of persons swam during the two-week period of estimated pathogen shedding.4

Another outbreak occurred in New Mexico in August 2008. A competitive swimmer competed while ill with symptoms of protracted diarrhea. During the competition, 92 cases were identified from 25 pools in the area. Thirteen other competitive swimmers, coaches and lifeguards were exposed and also became ill.

Diarrhea is not the only way feces enters pools. Swimming venues are heavily populated with diapered and toddler age children. According to a CDC survey, awareness among parents that swimming pools can harbor harmful human pathogens was low. Many parents believed that chlorinated swimming pools were sterile.5

Fecal accidents, however, occur frequently and often on a daily basis. Even when an overt fecal accident is not documented, residual feces may routinely wash off of the bather’s bodies.

On average, 0.14 g of feces is present on the perianal surface of persons. That’s about the weight of a small pea. Children can harbor up to 10 g of feces on their bodies.6

Of the more than 22,000 pools monitored in the US during the summer of 2002, 54 percent had at least one violation. Some sites had up to 12 total violations and eight percent of the pools were shut down immediately.

Infrequent monitoring and the lack of federal standards prevent effective monitoring by outside agencies. Therefore, the CDC is working on the development of standardized pool codes for national consistency toward pool water quality control, known as the Model Aquatic Health Code (available at: www.cdc.gov/healthyswimming/model_code.htm). (reviewed in On Tap, April 2009).

In recent decades, Cryptosporidium has emerged as the primary concern in treated swimming pools. From 1991 to 2000, the organism was responsible for 66 percent of reported outbreaks of diarrhea (n=53) at water parks in the US.7

Infections may be mild, serious or even life-threatening. Children, the elderly and the immunocompromised are at greatest risk.

The severity of recreational waterborne disease was clearly demonstrated by a 1998 outbreak in Georgia where 26 people who swam in a child’s pool were sickened with E. coli O157:H7. The outbreak resulted in seven hospitalizations and one death. In this case, chlorine levels in the pool were not adequately maintained.7

Another outbreak at an Illinois water park, in 2001, occurred in a properly maintained pool. The pool water tested positive for Cryptosporidium despite adequate chlorine and pH levels. Fecal accidents, however, were reported daily. Three-hundred fifty-eight persons were infected with the organism.

Taking control of pool water quality
Recommendations for hyperchlorination to kill Cryptosporidium in pools is published by the CDC (www.cdc.gov/healthyswimming). Briefly, the guideline suggests a contact time (CT= inactivation value based on the concentration of free chlorine in ppm multiplied by the time in minutes) of 15,300 (20 ppm for 765 minutes or 10 ppm for 1,530 minutes, etc.).

CT values are affected by pH and temperature and are thus calculated based on standard pH of <7.5 and a temperature of >25oC (77oF). Changes in time or concentration can be adjusted to achieve the same CT value (See Table 1). Weekly hyperchlorination is recommended to keep parasite counts low in the water due to the possibility of continual recontamination. 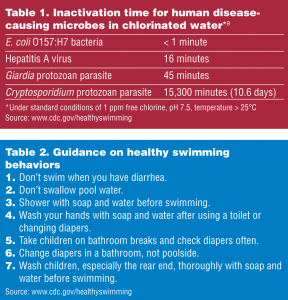 Pathogens in feces are typically present in very high numbers, approaching a million per gram of feces. A single fecal release in a pool could contaminate millions of gallons of water.7 The infectious dose, however, is very low – on the order of 10-100 depending on the organism. Thus, only small amounts of consumed water are necessary to transmit illness.

Protozoa are commonly excreted for weeks following the absence of symptoms. Thus previously ill persons become carriers and can spread the disease despite appearing healthy. Guidelines for healthy swimming should be observed and maintained (See Table 2). In addition, experts also recommend that anyone with infectious diarrhea not go swimming for up to two weeks after symptoms cease.

Some may say this is excessive control. A formed stool, in fact, may contain no harmful pathogens. If pathogens are present, they tend to stay contained in the mass and not released into the water as readily as a diarrheal stool.

In 1999, 300 samples of formed fecal releases were collected from swimming pools around the US. None of the samples tested positive for Cryptosporidium but 4.4 percent were positive for Giardia. Based on this data, the CDC recommends a CT of 50 for treatment of pools following a formed fecal accident and a CT of 15,300 for a diarrheal incident.8

Security factors
Swimmers report a sense of security about disinfected swimming venues. Many pools, however, are not maintained properly and even pools with properly maintained levels of chlorine can still transmit harmful human parasites that are resistant. Bottom line: chlorinated swimming pools can and do transmit disease.

Many complicated and integrated factors are responsible for increased public health risks from swimming pools. Although disinfected, the quality of swimming pool water is greatly affected by the behavior of the swimmers as well as applied maintenance procedures. Educating the public about the ease of which pathogens are spread in swimming pools and the pivotal role they play in reducing this transmission route is necessary to halt the increasing rate of outbreaks.

A multidisciplinary approach is needed to minimize outbreaks from disinfected water venues. Awareness among bathers and especially among parents of young children, must be increased relative to the risk of recreational waterborne illness transmission.