Disinfectants are classified by their chemical nature and each class has its own unique characteristics, hazards, toxicities and efficacy against various microorganisms. Environmental conditions, such as the presence of organic matter, pH or water hardness, will also impact the action of a disinfectant. Before using any chemical disinfectants, thoroughly read and follow manufacturer’s instructions.

Acids
Acidic disinfectants function by destroying the bonds of nucleic acids and precipitating proteins. Acids also change the pH of the environment, making it detrimental to many microorganisms.

Concentrated solutions of acids can be corrosive, cause chemical burns and can be toxic at high concentrations in the air. These characteristics limit their effective use. Antimicrobial activity of acids is highly pH- dependant.

Acids have a defined but limited use as disinfectants. Acetic acid is usually sold as ‘glacial’ acetic acid (95 percent acetic acid), which is then diluted with water to make a working solution concentration of five percent. The concentrated form is corrosive to the skin and lungs, but the typical dilution (five percent) is considered non-toxic and non-irritating.

Acetic acid is typically applied by spraying, misting or immersing an item into a diluted solution. Household vinegar is a four to five percent solution of acetic acid by volume. Acetic acid has poor activity in and around organic material.

Alcohols are considered fast-acting, capable of killing most bacteria within five minutes of exposure, but are limited in virucidal activity and are ineffective against spores. (Ethanol is considered virucidal; isopropanol is not effective against non-enveloped viruses.)

An important consideration with alcohols is the concentration used, with 70 o90 percent being optimum. Higher concentrations (95 percent) are actually less effective because some degree of water is required for efficacy (to denature proteins). Alcohols evaporate quickly but leave behind no residue.

Activity of alcohols is limited in the presence of organic matter. Alcohols are highly flammable, can cause damage to rubber and plastic and can be very irritating to injured skin. Due to the high concentrations, flammability risks and dilution concerns, alcohol is generally unsuitable for comprehensive disinfection.

Aldehydes are effective against bacteria, fungi, viruses, mycobacteria and spores. Aldehydes are noncorrosive to metals, rubber, plastic and cement. These chemicals are highly irritating, toxic to humans or animals with contact or inhalation and are potentially carcinogenic; therefore, their use is limited. Personal protective equipment (nitrile gloves, fluid-resistant gowns, eye protection) should be worn if you ever use these chemicals.

Glutaraldehyde can provide sterilization at prolonged contact times. A two percent concentration is used for high-level disinfection. Glutaraldehyde efficacy is highly dependent on pH and temperature, working best at a pH greater than seven and at high temperatures. It is considered far more efficacious in the presence of organic matter, soaps and hard water than formaldehyde.

Alkalis
Alkaline agents work by saponifying lipids within the envelopes of microorganisms. The activity of alkali compounds is slow but can be increased by raising the temperature. Alkalis have good microbicidal properties, but are very corrosive agents and personal protection precautions should be observed.

Sodium hydroxide (lye, caustic soda, soda ash) is a strong alkali used to disinfect buildings but is highly caustic. Protective clothing, rubber gloves and safety glasses should be worn when mixing and applying the chemical. Never pour water into lye; lye should always be carefully added to water. Otherwise, a very violent reaction will occur as well as the production of high heat that can melt plastic containers.

Sodium hydroxide is corrosive to most metals. Ammonium hydroxide is an effective disinfectant against coccidial oocysts; however, strong solutions emit intense and pungent fumes. This substance is not considered effective against most bacteria. General disinfection should follow the use of this compound.

Sodium carbonate (soda ash, washing soda) can be used in a high- temperature solution (180oF/82oC). It is more effective as a cleanser than a disinfectant since it lacks efficacy against some bacteria and most viruses. This disinfectant has poor activity in the presence of organic material and can be deactivated by hard water. It can be irritating, requires protective clothing and is harmful to aquatic life. 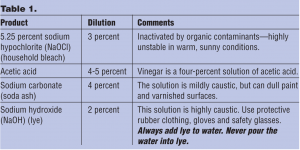 Biguanides
Biguanides are detrimental to microorganisms by reacting with the negatively charged groups on cell membranes, which alters permeability. Biguanides have a broad antibacterial spectrum, however they are limited in their effectiveness against viruses and are not sporicidal, mycobacteriocidal or fungicidal.

Biguanides can only function in a limited pH range (five to seven) and are easily inactivated by soaps and detergents. These products are toxic to fish and should never be discharged into the environment.

Halogens
Halogen compounds are broad-spectrum compounds that are considered low-toxicity, low cost and easy-to-use. They lose potency over time and are not active at temperatures above 110oF (43oF)or at high pH (> nine).

Since these compounds lose activity quickly in the presence of organic debris, sunlight and some metals, they must be applied to thoroughly cleaned surfaces for disinfection. Chlorine compounds function through their electronegative nature to denature proteins and are considered broad spectrum, being effective against bacteria, enveloped and non-enveloped viruses, mycobateria and fungi.

Biocidal activity of chlorine solutions is determined by the amount of the available chlorine of the solution. Low concentrations (two to 500 ppm) are active against vegetative bacteria, fungi and most viruses.

Rapid sporicidal action can be obtained at approximately 2,500 ppm;this concentration, however, is very corrosive so should be limited in its use. High concentrations are highly irritating to the mucous membranes, eyes and skin.

Chlorine compounds are rapidly inactivated by ultraviolet light and certain metals so fresh solutions should always be used. Hypochlorites should never be mixed with acids or ammonia as this will liberate chlorine gas out of solution.

Iodine compounds are broad spectrum and considered effective for a variety of bacteria, mycobacteria, fungi and viruses. Iodines function by denaturing proteins to interfere with the enzymatic systems of microorganisms.

Iodines are often formulated with soaps and considered relatively safe. Concentrated iodine compounds can be irritating to the skin, can stain clothes or damage rubber and many metals. Iodine agents are inactivated by quats and certain organic material.

Iodophors are iodine complexes that have increased solubility and sustained release of iodine. One of the more commonly used iodophors if povidone-iodine. They are good for general use and are less readily inactivated by organic matter than elemental iodine compounds. The dilution of iodophors increases free-iodine concentration and antimicrobial activity. 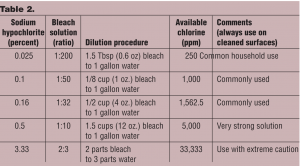 Oxidizing agents are broad-spectrum, peroxide-based compounds that function by denaturing the proteins and lipids of microorganisms. Peroxygen compounds vary in their microbiocidal range, but are generally considered effective on hard surfaces and inside equipment. In their diluted form, these agents are relatively safe but may be irritating and damage clothing when concentrated.

Hydrogen peroxide in the home is in diluted form (three to 10 percent) whereas industrial use involves concentrated solutions (30 percent or greater). Hydrogen peroxide at a five to20 percent concentration is considered bactericidal, virucidal (non-enveloped viruses may be resistant), fungicidal and, at higher concentrations, sporicidal. Its activity against mycobacteria is limited.

Peracetic acid is a strong oxidizing agent and is a formulation of hydrogen peroxide and acetic acid. It is considered bactericidal, fungicidal, sporicidal and virucidal. It is also effective against mycobacteria and algae and has some activity in the presence of organic material. Extreme caution should be exercised when applying these disinfectants against ion exchange media, as irreversible oxidative damage can occur.

Phenols
Phenols are broad-spectrum disinfectants that function by denaturing proteins and inactivating membrane-bound enzymes to alter the cell-wall permeability of microorganisms. Phenols can be coal-tar derivatives or synthetic formulations and usually have a milky or cloudy appearance when added to water and a strong ‘pine’ odor. Pine-Sol® is an example of a phenol found in the home.

Phenols are typically formulated in soap solutions to increase their penetrative powers and at five-percent concentrations are considered bactericidal, tuberculocidal, fungicidal and virucidal for enveloped viruses. Phenols are not effective against non-enveloped viruses and spores.

Phenols do maintain activity in hard water and in the presence of organic matter and have some residual activity after drying. Phenolic disinfectants are generally safe for humans but prolonged exposure to the skin may cause irritation. Concentrations over two percent are highly toxic to all animals, especially cats.

Quaternary ammonium compounds
These ammonium compounds–also known as quats or QACs–, are cationic detergents that are attracted to negatively charged surfaces of microorganisms, where they irreversibly bind phospholipids in the cell membrane and denature proteins, impairing permeability. Quats can be from different ‘generations’ depending on their chemistry, with later generations being more germicidal, less foaming and more tolerant to organic loads.

Quats have a residual effect, keeping surfaces bacteriostatic for a brief period of time after application. They are more active at neutral-to-slightly-alkaline pH but lose their activity at pH less than 3.5. Quats are considered stable in storage but can be inactivated by organic matter, detergents, soaps and hard water unless specially formulated.