The basic chemistry fundamentals presented each month are not intended to be a comprehensive chemistry course, but rather basic instruction on chemistry as it relates to water and water treatment. It is hoped that your interest will be piqued and induce you to want to learn more. The desired outcome is that it will help you become a more effective and valuable water treatment professional. Please get back to us with any questions or concerns; we welcome your input! 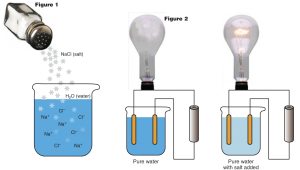 There is a strong chemical relationship between water and solute, which makes understanding this essential for work in the water treatment and purification industry.

When an inorganic compound (salt) is dissolved in water, it breaks down into ionic components.

They dissociate into positively and negatively charged particles known as ions. It is the basic concept for ion exchange water softening.

Most dissolved organic compounds do not form ions. Instead, they form covalent bonds, which are created when elements share electrons in order to become stable. These generally do not dissociate in water.

Ions theoretically move freely as independent particles. This water and salt relationship makes a big difference, as they easily bond to form an ionic component.

Such an ionic bond is formed between two elements due to opposite electrostatic forces. Salt (NaCl) can easily dissociate in water, forming into Na + ions and Cl – ions (Figure 1).

Differences
Ions differ from an atom or molecule in that they carry an electrical charge. Positively charged ions are called cations. These include: Ca2+, Mg2+, Na+, K+, Fe2+, Mn2+, Al3+

Not all compounds that dissolve in water form ions. Generally, only inorganic salts form ions. If you add sugar to the water, the bulb will not light. (Figure 2)

Valence
The number of charges on an ion is known as its valence. It is irrelevant whether this is associated with a cation or an anion. Some common examples have a variety of charges (Figure 3). 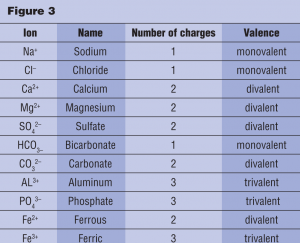