Effect of Water Quality and Temperature on Decontamination of Mango

Mango is a tropical fruit of great economic importance because of its nutritional value. The importation of mango from countries where the fruit fly is endemic into the US has required quarantine by the US Department of Agriculture (USDA) due to the presence of fruit fly larvae (Anastrepha ludens and Anastrepha oblicua).1

Recently, another problem has arisen. The thermal process normally used to control fruit fly larvae and bacteria populations has begun to be less effective against the bacteria. This is likely due to growing microbial resistance and using disinfectants to solve the problem, which will be reviewed.

The USDA has established a hydrothermic water treatment prior to exportation to control fruit fly larvae. This treatment consists of immersing the fruit in hot water at 46.1°C (114.98°F) for 65, 75 or 90 minutes depending on fruit weight and form.2

Calcium hypochlorite (CaClO2) and sodium hypochlorite (NaClO) are known to be effective against bacteria. We evaluated each of these disinfectants against thermo-tolerant Escherichia coli, using simulated hydrothermal treatment under turbid conditions.

Hydrothermal treatment
Even though mango are hydrothermally treated using hot water and chemical disinfectants to ensure their safety, Salmonella and Escherichia outbreaks have been associated with the consumption of hydro-treated mangoes.3 Microbiological quality of water used in hydrothermic treatment plays an important role due to the presence of thermotolerant bacteria which can remain viable after hydrothermal treatments.3,4

Adhesion of bacteria to suspended particles in the water also affects the disinfection process.5,6 The challenge of every disinfectant used in hydrothermal treatment is to surpass barriers (such as organic matter and temperature) to ensure fruit safety.

The initial objective of the study was to determine the microbial reduction and residual of chlorine in water and fruit pulp. Conditions of hot water treatment in mango were simulated.

Materials and methods
Mature green mangoes were obtained from a commercial packinghouse facility in Sinaloa, Mexico. All fruits were in good condition and free of mechanical damage.

Mangoes were selected by uniformity of size and color development related to ripeness. Fruit was exposed for 30 seconds to a chlorine concentration of 30 mg/L, washed with sterile tap water and stored at 5 ± 2°C (41°F) until approximately one hour before experimental treatments.

Experimental procedure
A pure culture of Escherichia coli (ATCC 19585) was selected and subjected to evaluation. Bacterial culture was grown and purified according to standard methods.7
Chlorine disinfectant at six percent was commercially acquired. Calcium and sodium hypochlorite concentrations used to perform the experiment were 15, 25 and 50 ppm.

Disinfectants evaluation
A batch of six mangoes for each set of experiments (n = 3) was submerged in the hot water bath simulator (80 L of sterile distilled water) at 46.1°C (114.98°F) with turbidity adjusted to two and 50 NTU and an E. coli concentration of six log10 CFU/mL at each disinfectant concentration. Water samples were taken after 45- and 90-minute contact times to evaluate the presence of culturable E. coli and residual disinfectant in water and pulp.

Escherichia coli reduction
The results (shown in Figures 1, 2, 3 and 4) correspond to E. coli reductions after being exposed to treatments with different concentrations of chlorine-based disinfectants. These were done in average (two NTU) and worst-case (50 NTU) water conditions, with measurements done in log.10 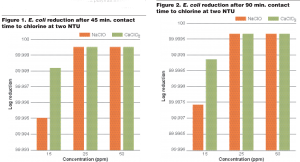 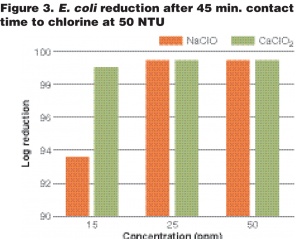 Neither calcium hypochlorite nor sodium hypochlorite E. coli reductions exposed to average and worst-case water conditions and different disinfectant concentrations were statistically different (p > 0.05) except for the treatments exposed to 15 ppm and 50 NTU (p = 0.00). These reached a reduction of 99 percent (~two log) compared to 99.9999 percent (six log) obtained by the rest of the treatments. Deficient bacterial reductions in worst-case water conditions can be attributed to free chlorine depletion by organic matter presence, hence reducing bactericidal activity of the disinfectant.9 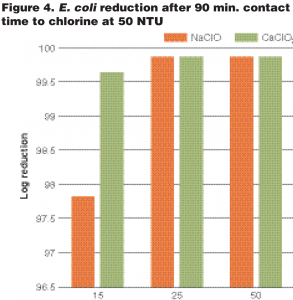 Sodium hypochlorite applied at 15 ppm was responsible for the lowest microbial reduction. When the concentration was increased to 25 and 50 ppm, however, a 99.9999 percent (six log) reduction was reached at both 45 and 90 minutes of contact time.

On the other hand, while evaluating residual chlorine in water, 80 percent of chlorine was lost as turbidity in the water tank increased. A higher calcium hypochlorite concentration by the end of the 90 minutes hydrothermal treatment than sodium hypochlorite was obtained, although this difference was not statistically significant.

Residual chlorine in pulp was not detected at very low levels in mango pulp. Sodium hypochlorite residual in mango pulp was 0.7 ppm while only a 0.61 ppm in calcium hypochlorite. Mango naturally contains chloride, which was measured in those that were exposed to the same hot water treatment as previously mentioned, minus the disinfectant. This served as a control to help determine what residual concentration was actually achieved through treatment.

Discussion
The analysis and discussion of results is based on Geldriech,10 who states a disinfectant will be considered effective if it reaches a microbial reduction of six log10 in water. Calcium and sodium hypochlorite were effective disinfectants for decontamination of mango when exposed to rinse water turbidities, two and 50 NTU and at concentrations of 25 and 50 ppm.

These findings state that chemical compounds that interfere with disinfection are inorganic and organic nitrogenous compounds, iron, manganese and hydrogen sulphide. Silt, clay and iron oxides are inorganic compounds, which in conjunction with organic matter and microbial cells determine water turbidity. Organic matter surrounding the target microorganisms is likely to influence the adhesion characteristics of cells and the lethal effect of disinfectants.12 This was demonstrated by the presence of lower chlorine residual concentrations in worst-case water conditions.

These results showed that the amount of organic matter present in wash water at worst-case water conditions reduced the efficacy of disinfectants but this was resolved by increasing the disinfectant concentration reaching a 99.99 percent of reduction. Reduction of free chlorine in produce rinse waters is due to demand of free chlorine by organic matter present in water tanks reducing the bactericidal activity of the disinfectant.9

Hot water treatment resulted in five-log10 reduction of artificially inoculated Salmonella on whole cantaloupe,14 but was only able to reduce total plate count by one to two log.10 This experiment was performed on whole cantaloupe surfaces, as mentioned previously. Compared to the artificially inoculated Salmonella, apparently indigenous microflora may occupy more protective micro-niches on produce surfaces rendering them more resistant to heat.13

Key findings
Calcium hypochlorite is less susceptible to the presence of organic matter. As turbidity increases, disinfectant effectiveness decreases, requiring higher disinfectant concentration as well as contact times. Mango hydrothermic treatment requires the application of disinfectants in order to reduce risk of bacterial internalization. The use of chlorine-based products in rinse water partially reduces the presence of Escherichia coli in contaminated produce.

Additional research is needed to evaluate other disinfectants that are not affected by water temperature and turbidity.

About the authors
Cristobal Chaidez-Quiroz, Ph.D. is a scientist and Regional Director of the Research Center for Food and Development (Centro de Investigacion en Alimentacion y Desarrollo-CIAD) in Culiacan station. He also teaches graduate and undergraduate courses at CIAD and the Autonomous University of Sinaloa (AUS), respectively. Chaidez-Quiroz earned a Bachelor’s Degree from the School of Biology, Chemistry and Pharmaceutical Sciences (AUS), with a major degree in biology and minor in chemistry. He earned his Doctorate at the University of Arizona, under the direction of Dr. Charles P. Gerba, and can be reached via email at [email protected].

Nohelia Castro-del Campo, Ph.D. is a scientist and Professor of the Research Center for Food and Development (Centro de Investigacion en Alimentacion y Desarrollo-CIAD) in Culiacan station. She earned her Doctorate Degree from the University of Arizona, also under the direction of Dr. Charles P. Gerba, and can be reached via email at [email protected].