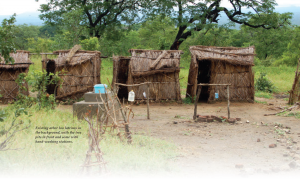 Malawian Mary Tchawango beams a broad smile and her dark eyes glitter when she talks about her toilet. The 57-year-old wife and mother of four has a right to be proud.

Her approximately $8 (USD) investment, which accounts for more than two weeks of her income, alleviated the embarrassment of asking neighbors to allow her, her husband and her children to use their pit latrines. Furthermore, it has dramatically improved the family’s status in the village and they believe their health as well.

Perhaps even more impressive, the Tchawango family’s simple loo actually improves the environment and leads to behaviors that benefit the quality of local water sources.

The domino effect
The Tchawangos live in a modest home in ever-sprawling Chikwawa, Malawi. Their previous pit latrine was no longer usable. So for two years, the family relied upon a neighbors’ pit latrine.

During that time, her children (despite her admonishment) often relieved themselves openly. This habit potentially spread disease and increased the possibility of bacterial contamination in nearby water points where residents collected drinking water.

“Traditional pit latrines usually consist of a few wooden poles covered in mud over a large pit. They are unstable, hard to clean, the wood rots and they can collapse while people are using them. Imagine being rightly afraid to use a toilet because you might fall into the pit.”

As a result, the overall health of the community can decline as sanitation solutions are avoided at a young age. Not only are poor sanitation and hygiene major contributors to diarrheal disease, but open defecation and unstable deep-pit latrines can contaminate groundwater supplies and may even harm ‘improved’ water sources if the source has a weakness or leak. 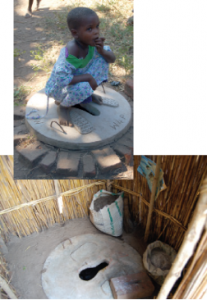 When one of the Tchawango daughters brought home a pamphlet from school that promoted the concept of a movable, ground-level latrine, the family immediately gravitated toward the idea.

Arbor loos are simple: a small concrete slab with a hole is placed over a shallow pit, usually no more than a meter deep. Families use the latrines, adding soil and ash after each use to help transform the waste into productive compost.

This action also promotes hand washing and helps improve health, because people are inclined to wash the ash from their hands. When the pit is full, the family simply removes the concrete slab and puts it over another shallow pit.

Sanitation advantages
The arbor loo has six real advantages. First, children are not afraid to use arbor loos because the pit is shallow and the slabs are well constructed. Water For People has supported toddler latrines that are arbor loos for children ages two through seven.

The children also love to show off their trees when they are visited. This is significant, as toddlers who learn to use toilets will have this key behavior ingrained at an early age.

Secondly, as it builds healthy sanitary behaviors in children, they pass the lessons onto their parents and family. This improves the child’s health, the family’s health and the health of those living nearby who are affected by unsanitary conditions and contaminated water supply.

Thirdly, typical pit latrines require a fair amount of construction and are prone to collapse if unlined. The arbor loo, however, is shallow, the slab is easily moved, the pits can be dug in less than an hour and they can last six to 12 months.

Fourthly, arbor loos help families transform their environments. Fruit-bearing, fodder and shade trees can change a landscape, add quality food to a family’s diet and even provide food for animals.

Fifthly, there is evidence in some parts of the world of deteriorating water quality due to deep-pit latrines. Approximately 80 percent of low-income, peri-urban populations in developing countries use groundwater for drinking water.1

There are two possible routes for waste contamination to pollute groundwater sources in these settings: either via poorly protected wellheads or via another point-of-entry in the aquifer such as a leaking latrine or sewer and the subsequent transport of this contamination through the groundwater into the well.2

Both routes have regularly been associated with the contamination of groundwater.3,4 Water quality in some parts of the world can be protected with arbor loos because the pits are so shallow.

Sixthly, according to research by Peter Morgan, the originator of the arbor loo, families that receive an arbor loo typically cut recurring bouts of diarrhea by roughly 50 percent. Families reduce the amount of money they spend on visits to the clinic and they also have potential for shade on their compound or the added nutritional value of fruit from a tree. 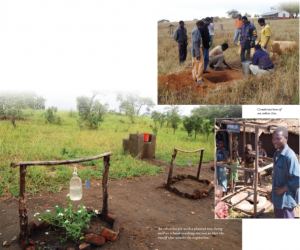 The Tchawango family and nearby residents are on the road to improved health thanks to their arbor loo. Unfortunately though, according to the 2008 Joint Monitoring Report (JMP) produced by WHO and UNICEF, an estimated 2.5 billion people globally suffer from inadequate sanitation.

Considerable effort is being made to address these water quality and sanitation challenges. Many, like the Tchawango family, are playing their parts with the help of the arbor loo.