The Basics of Water Chemistry Molecules and Compounds

Halogen chemicals are all oxidants and, with the exception of fluorine, are used as water disinfectants.


The basic chemistry fundamentals presented each month are not intended to be a comprehensive chemistry course, but rather basic instruction on chemistry as it relates to water and water treatment. It is hoped that your interest will be piqued and induce you to want to learn more. The desired outcome is that it will help you become a more effective and valuable water treatment professional. Please get back to us with any questions or concerns; we welcome your input!

Last month we talked about elements. Most chemicals found in water treatment are molecules and compounds.

A compound is a chemical substance composed of two or more elements whose composition is constant. Several compounds are simply two of the same element that combine to form a ‘diatomic’ compound (see Figure 1). They are all gases and include: 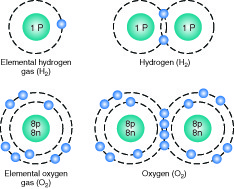 Since these are often encountered in water treatment, everyone in the industry should remember them. The mnemonic acronym ‘HONClBrIF’ might help.

The last four of these gases (Cl2, Br2, I2 and F2) are called the ‘halogen’ chemicals. They are all oxidants and, with the exception of fluorine, are used as water disinfectants. Fluorine is such a powerful oxidant that it presents handling problems and cannot be used for this purpose.

Compounds are formed when two or more elements combine in a definite ratio. Some examples include:

Compounds exhibit different properties than the elements that make them (Cl2 vs. NaCl). They can be as simple as table salt (NaCl) or complex like DNA.

Primary compounds key to the understanding of water treatment include:

Combined elements
Most of the compounds encountered in water treatment are not comprised of the same elements but specific combinations of elements. These molecules will have much different properties than the basic elements from which they are formed.

For example, the compound sodium chloride (common table salt) is much different than both elemental sodium and chlorine. Examples of compounds familiar to those of us in the water treatment industry include:

Weight and moles
The sum of the atomic weights of all of the elements in a compound or element is its molecular weight, which has units measured in Daltons. The molecular weight of an element or compound in grams is known as a mole of that substance (m).

A mole of one substance always contains the same number of particles as a mole of any other substance. This number is known as Avogadro’s Number and is 6.02 x 1023 particles/mole.

A mole of any substance dissolved in a liter (L) of solution is known as molarity (M). The formula for such is: M= m (solute) ÷ L (solution)