In 1996, equipment for two new homes to be built outside of Elko, Nevada was designed and bid. Both home sites already had deep wells drilled and the water was undrinkable (see Table 1). 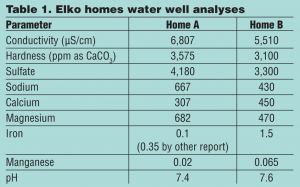 The equipment was bid to a novice developer and an inexperienced contractor. The worst aspect of this arrangement was that the contractor employed a plumber who was just starting in business, although he had worked at a plumbing supply business for years.

Because of this dysfunctional start, several problems and challenges have continued to occur. Invoices to all of the owners for parts and service of the two homes during 12 years averaged $628 and $642 annually.

Since the performance of these whole home systems has been monitored for 12 years, the project generated several lessons learned that need to be shared with the industry.

Design recommendations
Similar equipment was bid for both homes (see Graphic 1). Home site A was suspected to have an iron problem, even though the analysis showed little. Home site B had a definite quantity of iron.

Conventional wisdom was that the iron needed to be reduced to less than 0.1 ppm prior to an RO system. Since the well pump did not have enough flow to backwash a single iron filter of sufficient capacity, two parallel iron filters were proposed with selected media to remove the iron.

Each RO system was to be equipped with a product water at shutdown flush feature, to be designed for a low 25 to 33 percent recovery. Previous experience had shown that this seemed to work OK with brackish water very high in sulfate hardness. 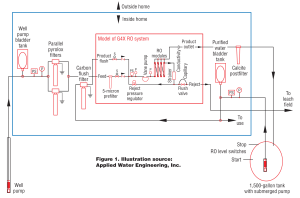 Storage tanks requirements
The most troubling aspect of the installation was the product water storage tanks. The contractor supplied ribbed, horizontal, PE storage tanks of 1,500 gallons (5,678 L) each, to be buried outside of the homes. Submersible well pumps with shrouds were supplied, with RO start and stop level switches to be used in the tanks.

Building codes required that these rural homes have water available for fire fighting, so the storage tanks were equipped with galvanized two-inch emergency access pipes with U fittings (no screen or filter). No provision was made by the contractor to provide access to the tanks for pump or level switch maintenance, with each tank having two manways that were not properly sealed.

It was specified that all the piping in the tanks be SS or corrosion resistant plastic. This was ignored.

The tank manufacturer recommended that they never be drawn down to less than 25 percent capacity. This recommendation came from the possibility of the tanks floating out of the ground in regions with high ground water levels (definitely not the case in the arid Nevada hills). Essentially, the selection also meant there would be no way to disinfect and rinse out the tank.

System maintenance
In the intervening 12 years since the homes were constructed, the water purification systems have been continually supported. Some of the initial work had to be redone to enhance and ensure the operation system quality.

Home A has changed hands five times; Home B is on its third owner. The homes are 230 miles away from factory service and over several mountain passes that may require auto tire chains in the winter.

The biggest expenses suffered by the homeowners were due to the product water storage tank execution. There is nothing like digging up a buried water tank in the frozen ground of winter. Nights in the desert can fall to below –30 degrees F (-34 degrees C ).

All of the interconnecting tubing for Home Site A was plumbed in copper with non-union workers. The polybutylene tubing and acetal fittings specified were determined not to meet code according to the plumber.

The galvanized pump outlet tubing of both installations had to be replaced. The level switches in Home B required service and replacement due to a heavy coating of iron.

The tank at Home B was contaminated by dead rodents that had entered the tank through the unfiltered fire access pipes or through inadequately sealed manways. These expenses were incurred by the original homeowner.

Water system performance
While far from perfect, the water purification systems have fared better than expected. The equipment in Home A has suffered numerous pump and pump outlet pressure gauge failures.

However, after 12 years, it still contains the original four RO membrane elements that were installed. They have been chemically cleaned only three times.

The second owner of Home B thought he knew more than what was recommended. During his ownership, the product water at shutdown flush was disconnected, the calcite post filter removed and a softener installed.

These changes placed reject water into a small cavity and used a level-switch operated sump pump to send the reject water to disposal. In 2004, iron in his well water was measured at 5 ppm and there was no reduction by the iron filters. It is believed that the anaerobic condition of the well water prevented the iron media from functioning.

Lessons learned
Several lessons were learned from this installation that need to be shared with other water treatment professionals.

About the author/company/products
Stephen C. Carr owns and operates Applied Water Engineering, Inc. (AWE) in Salt Lake City, UT, which he co-founded in 1977. AWE has been manufacturing RO systems for over 30 years, with a number of them having been used in homes in New Mexico, Texas, Florida and other states.

Carr received a Bachelor Degrees in physics from Occidental College and in mechanical engineering and Columbia University. He also completed one year of graduate study in engineering at MIT.

These two particular systems were purchased by a contractor who installed the overall system. Pyrolox media and TW-4021 TFC Filmtec membrane elements were selected for iron removal and TDS reduction. After the original dealer had disappeared, AWE continued to support the systems with their new owners and service providers.