When it comes to performance specifications on POU reverse osmosis (RO) systems, daily production rate and efficiency rating are among the most popular. These ratings are included in various forms of product literature and sales sheets and are frequently cited in kitchen table sales presentations.

Although they are often referenced, the details of their measurement methods are not very well understood. Most industry insiders know, in general terms, that daily production rate has to do with how much water the system will make and that efficiency rating has to do with how much water put through the system becomes product water as opposed to reject water.
But few could accurately explain how daily production rate or efficiency rating is actually measured. This column will walk through these measurements step by step, to help remove some of the mystery from these commonly discussed but poorly understood ratings. 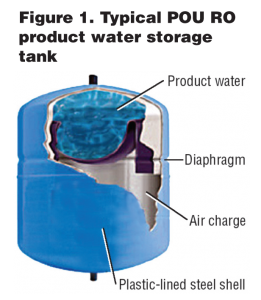 However, the air-filled diaphragm creates system backpressure. This backpressure reduces the flow rate of product water through the membrane.

Because inlet pressure, temperature and composition of feed water can also influence RO system production rates, they are defined by the standard. The inlet pressure is set at 50 psig.
The temperature of the water is 25°C (77°F). Test water consists of deionized water that has 750 mg/L of TDS as sodium chloride added to it.

As RO systems are put through the two cycles on the test stand, various measurements are conducted:

These measurements are all that is required to calculate daily production rate and efficiency of the RO system. Daily production rate is calculated by adding the volume of product water generated during each cycle, dividing by the combined time of the two cycles and then normalizing to 24 hours. 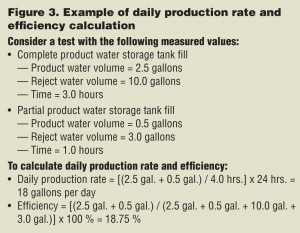 Although the example calculation includes hypothetical numbers, they are somewhat realistic, which allow some real-world observations to be made. For example, note that the partial product water tank fill cycle resulted in only 20 percent of the product water of the complete tank fill cycle (0.5 gallons compared to 2.5 gallons), but took 33 percent as long to complete.

It should also be noted that the amount of reject water from each cycle was roughly proportional to the time required for the cycle. From these numbers, it can be seen that production rate and efficiency for the complete product water tank fill cycle are better than for the partial fill cycle. This is due to the effect of increased backpressure from the air charge as the tank fills with product water.

About the author
Rick Andrew is the Operations Manager of the NSF Drinking Water Treatment Units Program for certification of POE and POU systems and components. He enjoys leveraging his more than 10 years of experience in this area to help explain the complexities and details of the NSF/ANSI DWTU Standards. Andrew has a Bachelor’s Degree in chemistry and an MBA from the University of Michigan. He can be reached at 1-800-NSF-MARK or email: Andrew@nsf.org.