Perhaps the greatest omission in water quality research is the lack of data and risk assessment on the health effects of simultaneous exposure to multiple contaminants. Recent research examines the effect of environmentally relevant arsenic exposures on the immune system leading to an increased impact of microbial infections.

Data gaps
Throughout our daily lives we are exposed to multiple hazards. Through ingestion, inhalation and dermal absorption, environmental contaminants enter our bodies and initiate a variety of effects. The majority of research to date has evaluated the effects of single chemical contaminants on human, animal or cellular hosts. 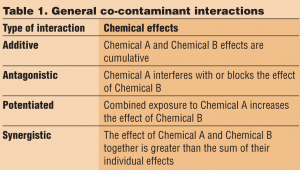 Very little is known about cumulative exposures to environmental contaminants. We do not even have enough data to predict such health outcomes. To complicate matters further, infectious disease-causing agents can have variable impacts on populations exposed to different chemicals in the environment.

Evaluating the health effects of contaminants in our environment is complicated by not only variable combinations of different types of contaminants but also individual host factors (sex, age, immune function, co-infections, genetics, etc.). Add in spatial and temporal factors and you have a wide range of possible exposure and outcome scenarios.

Conducting research to look at all of the possible combinations has proven to be difficult. This has resulted in slow advancement in the field of cumulative exposure risk assessment.

Arsenic inhibits immune function
Recent studies show that a common drinking water contaminant may be responsible for interfering with normal immune responses and hormonal pathways (i.e., pathways of estrogen, testosterone, progesterone, glucocorticoids, mineralocorticoids and others) in humans.[1],[2] The contaminant is arsenic. Approximately 25 million people in the US and hundreds of millions of people worldwide are estimated to be chronically exposed to arsenic levels above federal guidelines.[3]

Arsenic is naturally present in the environment where geological sources are the main route of exposure via ingestion of drinking water from both ground and surface water supplies. Groundwater supplies are particularly vulnerable due to natural arsenic from weathering rocks and eroding materials leaching into underground aquifers.

Due to evidence of increased bladder and lung cancer risks from arsenic exposures, the US EPA reduced the maximum contaminant level (MCL) from 50 ppb to 10 ppb in drinking water in 2001. Effective in 2006, the arsenic guideline requires increased monitoring for both groundwater and surface water supplies, but does not have jurisdiction over private well water supplies, the source for approximately 15 percent of Americans. Monitoring of source water supplies is important to evaluate geographical regions of greatest concern.

The maximum contaminant level goal (MCLG) for arsenic is zero, given that exposure at any level is suspected to result in adverse health effects. Evidence of increased type 2 diabetes associated with arsenic exposures has been suggested (see On Tap, October 2008) in addition to cardiovascular disease and reproductive and developmental effects, but the relationship is still unclear.

Pandemic concerns
Influenza is a significant public health problem resulting in three to five million hospitalizations and 250,000 to 500,000 deaths worldwide every year. In the US, approximately 30,000 deaths due to influenza occur annually.

The expected response when a healthy individual is exposed to human influenza virus is an immediate immune reaction. Infection-fighting cells rush to the lungs and begin working to rid the foreign substance from the body. Environmentally relevant levels of arsenic (100 ppb) have been found to significantly impact the immune response in laboratory animals resulting in more severe influenza infections.1

In the recent study, mice ingesting arsenic in their drinking water on a daily basis, at levels of 100 ppb, were initially unable to initiate a strong immune response to the H1N1 influenza virus (aka the swine flu virus). Known, sub-lethal levels of H1N1 viruses were given to the mice via intra-nasal inoculation.

Arsenic-exposed mice experienced an increase in illness severity and higher numbers of viruses in the lung. Although a delayed immune response occurred in these mice, the response was massive, with immune cells flooding the lungs and causing additional lung damage and resulting in increased illness. Measures of illness were significantly greater in mice exposed to arsenic compared to those that were not.

The World Health Organization (WHO) reports that many countries around the world utilize drinking water supplies with arsenic levels in excess of 10 ppm (ppb), including the US, Mexico and Southeast Asia. These countries have also experienced some of the highest number of cases of swine flu.

Controlling disease impacts
According to the study above, arsenic exposures exacerbated health outcomes related to swine flu infections. In fact, multiple alterations in the immune response were noted in arsenic-exposed mice, signifying the complexity of toxin interactions with hosts at the molecular and cellular level.

Guidelines for controlling arsenic exposures are not always practical for all regions. The WHO recommends monitoring water supplies and using dual systems of collection and/or distribution for arsenic-rich water, safe for laundering and bathing and low-arsenic water for drinking. Rain water and treated surface waters may also be used as a substitute for groundwater supplies high in arsenic.

Technology is available for removal of arsenic from drinking water (see On Tap, October 2008) but is often expensive and technically difficult for applications in many rural areas, particularly in developing countries. Low-cost chemical packets for household treatment designed to remove arsenic and inactivate microbial pathogens have been developed and have proven successful in Latin America (see On Tap, April 2006).

Identifying environmental risk factors that exacerbate influenza and possibly other respiratory infections is a vital health need and may help to minimize the impact of potential pandemic outbreaks in the future. More studies are needed to determine the causal relationship of co-contaminants in water and human disease and to evaluate the role of other waterborne toxins relative to infectious disease manifestation.