New test methods can facilitate scientific discoveries and lead to new commercial granular activated carbon (GAC) products. Also, a new or modified paradigm can result when advanced data acquisition is available to base decisions on.

Before new models based on improved data acquisition can be provided, it is critical that we have a complete understanding of the state-of-the-art and history. New working concepts typically build on prior work.

Two historical recommended readings provide an understanding of how activated carbons work.1,2 Dr. Milton Manes also connected this early work and brought it up to the present in his writings. 3

Typically the different vendor samples had similar ASTM test method results for iodine and butane activity and other standardized tests. But, upon GRPD advanced testing, significant and relevant differences were revealed, allowing carbon users to select the best GAC for their applications.

GRPD also provides a full- characterization of performance and physical properties for the sorbent sample: characteristic and differential adsorption and desorption curves; aqueous- and vapor-phase isotherms; third-degree polynomial equation for adsorption pore volume as a function of specific adsorption potential energies; pore size distribution; total pore volume; cleanliness of tested sample; and mid- and high-capacity adsorption values and surface area in meters squared per gram. The process has been run on a wide variety of sorbent types and forms, thus a new sample can be run and quickly determine its market strengths and weaknesses based on comparison with the prior run collective database.

Trace capacity test method applications
The TCTM process compliments GRPD by providing more detailed information for the tested sample about the high adsorption energy sites in the GRPD test method.18 The following information will further outline this needed new test method and help set-up and/or use the test method to evaluate sorbent materials to solve some pressing real commercial opportunities.

Often test methods are the difference makers in commercial product development efforts. Some problems the TCTM are expected to help are: presently difficult to remove small adsorbates at trace levels from water and air streams, endocrine disrupter chemicals, carbon dioxide and methane capture and release and many more.

It is obvious to look at the use of tetrafluoromethane (TFM) as the sorbent challenge gas based on prior use of 1,1,1,2-tetrafloromethane (TFE) as the challenge gas for the GRPD test method 4-17 . These many GRPD applications for a full-characterization of sorbent materials will continue to grow as more is learned about the benefits of GRPD .

Use of TFM for the TCTM is a natural extension of TFE, because TFM requires higher energy binding sites to efficiently capture it compared to TFE. Choosing TFM as the challenge gas provides a lower boiling point and lower polarizability of the path to characterize the highest potential adsorption energy sites in a sorbent test sample. 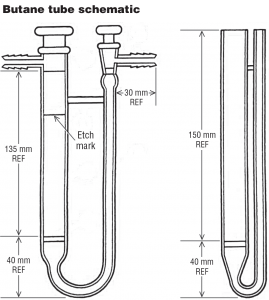 Localized vs. mobile graphitic surface binding
Molecules that hit the activated carbon surface (from the vapor-, liquid- or melt-phases) are pictured to glide or hop along the graphitic surface 2. With activated carbon’s heterogenous adsorption energy distribution, the adsorbate speed on the surface and its ability to hold upon the adsorbate and keep it from going back into the bulk phase depend largely on the adsorbent localized adsorption energy.

By designing and manufacturing more high-energy adsorption sites with targeted specificity into the adsorbent, it makes sense that present molecules which are refractory to activated carbon adsorption may be adsorbable at low, partial pressures and concentrations relative to their saturation concentrations. This is a worthy future goal. A significant trace capacity test method to evaluate present and future emerging sorbents for this market is needed by users and manufacturers.

The above sample tube has 16.7 ml (plus or minus 0.05 ml) of volume for the sample. The sample packing density in the sample tube, carbon weight in grams/16.7 ml, must be equal to at least 94 percent of its dry apparent density obtained in ASTM method D 2854: Test Method for Apparent Density of Activated Carbon.

Since TFM is a much more difficult challenge for the sorbent, only high- adsorption potential energy binding sites adsorb TFM. Again, test results can be expressed in grams of TFM adsorbed per 100 grams of sorbent or per 100 ml of sorbent volume, just like is done with the standard butane test.

It is important to clearly understand the relatively recent ASTM recommended terms unused- and used-GAC. 20 The ASTM recommends (via personal discussions with Dr. Amos Turk) use of these words in place of virgin (unused) and spent or exhausted (used) carbon. The starting carbon in your application is the unused-GAC and the used-GAC is what you change out to start a new treatment.

Completely used-GAC occurs when influent and effluent through a GAC column is the same. We suspect that we will continue to see virgin, fresh, spent, exhausted and other terms to describe the status of GAC; but we should all try to use the ASTM recommended glossary of terms in order to understand each other better and be more productive.

ASTM method approval process
Getting GRPD formally through the ASTM process as a listed method will not happen in the near future. There are only a few instruments available to provide this

Recent comparison of ASTM butane activity method and working capacity and butane working capacity determined by GRPD indicates both GRPD and ASTM butane activity test D 5742-95 and ASTM D 5228-96, Test Method for Determination of the Butane Working Capacity of Activated Carbon, yield the same results.21 This is another testimonial to the power and ruggedness of GRPD testing.

The trace capacity method is designed to compliment the GRPD full characterization test method by focusing on the binding sites with the highest adsorption forces. All adsorption binding sites in activated carbons are not the same.

Selecting the best activated carbon for a specific application depends on determination of the sorbent’s pore structure. The TCTM and GRPD test methods are powerful aids in pore structure determinations. Being able to better measure the distribution of high-energy adsorption sites with TCTM is expected to help facilitate development of new emerging sorbents designed to help solve some important problems.

About the Authors
Henry Nowicki, Ph.D./MBA, is President for PACS, develops new products and business and directs the day-to-day products and services developments and delivery. Nowicki has provided technical assistance to legal professional in over 40 prior cases and provides the introductory class for the Activated Carbon School. He can be reached at Henry@pacslabs.com or by phone (724) 457-6576.

George Nowicki, BA/BS, is Laboratory Manager for PACS and is a senior activated carbon specialist. He is an instructor in the Activated Carbon School, and may be contacted by email at George@pacslabs.com or by phone at (724) 457-6576.

Wayne Schuliger, PE, is Technical Director for PACS and a leading engineer consultant for activated carbon adsorption systems. Schuliger is an instructor in the PACS Activated Carbon School and can be reached by email at Wayne@pacslabs.com.

Shib Mookherji, Ph.D., is Director of Quality Assurance for PACS. He is also a teacher for the PACS short course “Development and Validation of Analytical Methods.”

Barbara Sherman, BS/MBA, is Director of Short Courses and Conferences for PACS. She coordinates the bi-annual International Activated Carbon Conference and Courses program. and can be contacted by email at Barb@pacslabs.com or by phone at (724) 457-6576.

About PACS and Activated Carbon Services
Professional Analytical and Consulting Services, Inc. (PACS) is celebrating its 26th year of business and its major division, Activated Carbon Services, is in its 25th year of business. The firm provides products and services to enhance its clients’ position in their market places. Products and services are described at www.pacslabs.com.

If you would like to hear the inventor’s talk about the new Trace Capacity Test Method, plan to attend their session in Pittsburgh, PA on October 6 at 9:15 am at IACC-24. If you know of other new test methods capable of aiding better sorbent selection decisions, let us know through Henry@pacslabs.com.