Material safety under the NSF/ANSI water standards is based on exposure of the subject product to water under specified conditions and analysis of the resulting water for potential contaminants.

While the analysis of potential leached contaminants is relatively consistent regardless, protocols for exposure of the subject product to water vary depending on the intended end-use of the product.

For adsorptive or absorptive medias, such as activated carbon, there are three exposure protocols resulting from three different intended end-uses:

The POE protocol is relatively new, having been adopted into NSF/ANSI Standards in 2007. Examination of each of these protocols helps explain the similarities and differences based on the three different end-uses.

Point of Use NSF/ANSI 42 covers activated carbon that is intended to be used in POU filtration systems. Under this intended end use, the carbon can see long periods of stagnation with no flow of water through the carbon. This water is often then consumed when someone fills a glass, with the first water coming through the filter.

This intended end-use prompted the Joint Committee on Drinking Water Treatment Units to develop a material extraction testing protocol with minimal conditioning prior to exposure to test water. NSF/ANSI 42 requires that carbon be exposed to water under inlet pressure of 50 psig. For this reason, the test is conducted with the carbon packed in a housing (Figure 1). 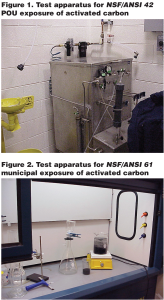 The protocol specifies that carbon be flushed according to manufacturer’s instructions and then exposed to test water for 24 hours. A housing is packed full of carbon in order to test at the highest achievable mass-to volume-ratio.

Another sample of this water is taken and mixed together or ‘composited’ with the two previously collected samples of water. The final composite sample is the exposure sample that is analyzed for potential residual contaminants.

Municipal applications NSF/ANSI 61, Section 7, applies to process media products intended for the reduction of dissolved or suspended materials present in drinking water. Products covered include, but are not limited to, process media used in ion exchange, adsorption, oxidation, aeration and filtration. One such adsorptive media is activated carbon.

Granular activated carbon (GAC) and powdered activated carbon (PAC) may be utilized in municipal water treatment applications. In comparison to POU applications, very large volumes of carbon are commonly used in adsorption beds to capture contaminants during the water treatment process. This intended end use involves constant flow with no stagnation.

In keeping with this intended end use application, NSF/ANSI 61, Section 7 outlines the general requirements for the evaluation of media including manufacturer’s use instructions, specifics for sample preparation, sample conditioning and testing of products such as PAC and GAC. Per Section 7, GAC is wetted or completely immersed in tap water prior to conditioning for 16 hours +/-1 hour.

Next, 25 ± 5 grams of carbon is exposed to one liter of pH 5 reagent water to generate water samples that will be analyzed. The exposure vessel is placed on a magnetic stirrer for 60 ± 5 minutes (Figure 2).

Point of Entry
POE is also addressed by NSF/ANSI 61, Section 7. The POE protocol is somewhat a hybrid between the municipal and the POU protocols.

POE systems can see some stagnation periods, but less than POU because all water to the facility flows through the POE system. Like the municipal protocol for testing of carbon, pH 5 exposure water is used.

Similar to the protocol for testing of carbon for POU, however, testing is conducted in a vessel under 50 psig pressure. The mass-to-volume ratio for testing is selected by the manufacturer. 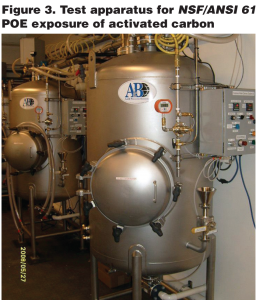 The carbon is flushed and conditioned per manufacturer’s instructions and exposed under pressure for 24 hours (Figure 3). The water is then sampled.

The carbon is exposed for another 24 hours and sampled for a third time. The three samples are composited together for analysis. 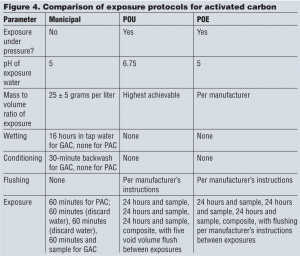 One question often arises regarding a comparison of the various exposure protocols. That question is which of the three protocols is the ‘worst case’ or the one that will lead to the highest concentrations of leached contaminants.

From a theoretical perspective, it is difficult to determine. The POU protocol has the highest mass-to-volume ratio for exposure and the least flushing. The exposure, however, is with water of relatively neutral pH (6.75) compared to the other two protocols at pH 5.

Over time, development of a database for carbon tested to each of the three protocols may help to answer this question from a practical (as opposed to a theoretical) perspective. Once a convincing, conclusive set of data has been gathered, it may be possible to determine which exposure is a worst case.

About the author
Rick Andrew is Operations Manager of the NSF Drinking Water Treatment Units Program for certification of POE and POU systems and components. He enjoys leveraging his more than 10 years of experience in this area to help explain the complexities and details of the NSF/ANSI DWTU Standards. Andrew has a Bachelor’s Degree in chemistry and an MBA from the University of Michigan. He can be reached at 1-800-NSF-MARK or email: [email protected].