Chlorine – A Cheap and Efficient Killer

The water that most of us drink is stored, treated and distributed to our homes by public and private water utilities. Algae, bacteria, fungi and viruses can often be found in untreated water. Americans have grown to expect a safe drinking water supply, but achieving that level of safety is a complex task.

One hundred and fifty years ago, much of the US water supply was teeming with various forms of aquatic organisms. Waterborne diseases, such as cholera, typhoid and dysentery were a serious health problem. They are still major concerns in underdeveloped nations where over a billion people lack clean drinking water and almost two billion lack adequate sewage systems.

In 1992, the World Bank rated drinking water as first on its list of preventable environmental hazards worldwide. Since 1991, the largest cholera epidemic in recent history infected over 800,000 people from Peru to Mexico. 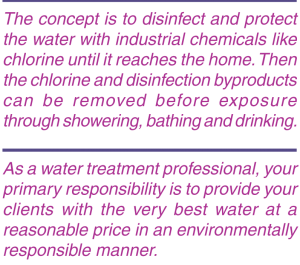 Waterborne micro organisms include coliforms and heterotrophic bacteria, viruses and protozoa. These organisms range in size from extremely small viruses to relatively large cysts. They also vary greatly in the nature of their structure, lifecycle, and reproduction characteristics.

Pathogenic micro organisms occur naturally in lakes, streams, reservoirs and most surface water sources. Groundwater supplies are now becoming a subject of increasing concern because enteric viruses and other organisms can leach into the groundwater system from the land application or burial of sewage sludge and other treatment wastes.

Since water utilities first began using filtration and disinfection systems a century ago, the risk of disease from drinking water in industrialized countries has been greatly reduced. Despite the significant progress that has been made, there are still numerous disease cases resulting from contaminated drinking water in the US. Health risks from aquatic pathogens range from mild gastrointestinal distress to systemic disease and, in severe cases, even death.

Drinking water systems
There are nearly 250,000 public water supply systems in the US, serving everything from the smallest towns to major metropolitan centers. Ninety percent of the population receives its water through these community water systems, with the rest using private wells or other individual sources.

The US EPA ranks drinking water pollution as one of the top four environmental threats to health. From 1971 to 1988, there were nearly 137,000 cases of waterborne disease–or an average of 7,600 cases per year–reported in this country. It is suspected that there were numerous undocumented cases as well, because many cases of gastrointestinal illness are not recognized as part of a larger pattern of waterborne disease.

It has been estimated that only half of waterborne disease outbreaks in community water systems and about one third of those in non-community systems are ever detected, investigated or reported. Microbes in tap water may be responsible for as much as one in three cases of gastrointestinal illness in the US. Rates of waterborne illness as high as 900,000 cases and 900 deaths per year have been estimated by the Natural Resources Defense Council (NRDC).

Killer chlorine
Water utilities in the US began treating drinking water with chlorine in 1908. Chlorine and its compounds are currently used by over 98 percent of all US water utilities that disinfect drinking water; it is a cheap and efficient killer.

By adding chlorine and its compounds to drinking water, almost all organisms living in the water are killed. Chlorine remains in the water as it is distributed to homes and businesses, thereby retaining much of its ability to continue killing. Although chlorine’s disinfectant value has been known for nearly a century, the mechanism by which the compound kills or inactivates micro organisms is still not completely understood.

The municipal water treatment process involves a series of different steps. Some of the major steps include: flocculation and coagulation (the joining of small particles of matter in the water into larger ones that can more readily be removed); sedimentation (the settling of suspended particles in the water to the bottom of basins from which they can be removed); filtration (the filtering or straining of the water through various types of materials to remove much of the remaining suspended particles); and also chemical disinfection.

Chlorination is usually performed at several stages of the water treatment process. Pre-chlorination may be performed in the initial stages to combat algae and other aquatic life that could interfere with treatment equipment and subsequent stages in the process.

The major chlorination stage, however, occurs as the final treatment step after the completion of the other major cleaning processes, where the concentration and residual content of the chlorine can be closely monitored. In this phase, the chemical is more active and less contact time is required to properly disinfect the water supply.

Chlorine effectiveness
Chlorination can deactivate micro organisms by a variety of mechanisms, such as damage to cell membranes, inhibition of specific enzymes, destruction of nucleic acids and mechanisms. The effectiveness of the chlorination process depends upon a variety of factors, including chlorine concentration and contact time, water temperature, pH value and level of turbidity.

Chlorination remains the most effective and cost-efficient way to disinfect water that is stored, processed and distributed to homes and businesses at a municipal level. It helps protect us all from deadly microbial diseases.

When chlorine is exposed to organic contaminants, certain disinfection byproducts (DBPs) are formed. For example, naturally occurring fulvic and humic acids in water will react with chlorine to form a toxic soup containing numerous compounds such as trihalomethanes, halocatic acids, trichloroacetic acid and others.

Chlorine will also react with biofilms of heterotrophic bacteria so common in piping systems and many water treatment devices. Over 600 DBPs have been identified in drinking water treated by chlorine or chloramine. 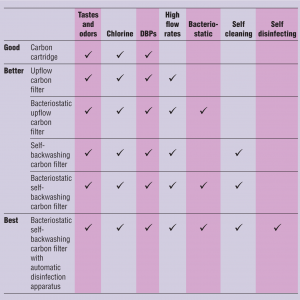 Health concerns
Epidemiological studies have related exposure to chlorine DBPs with birth defects, pregnancy complications, respiratory stress, eye irritation, skin damage, headaches and fatigue. It has also been related to certain cancers like bladder, rectal and kidney (recent studies suggest there might even be a causal relationship between chlorine byproducts and breast cancer).

Essentially, the consumer is being told that they must choose between illness and/or death from disease and micro organisms, or a steady decline in quality of life from the permanent damage caused by chlorine and its byproducts of disinfection. Thankfully, modern water improvement technology allows the consumer a third choice.

The concept is to disinfect and protect the water with industrial chemicals like chlorine until it reaches the home. Then the chlorine and DBPs can be removed before exposure through showering, bathing and drinking.

This is analogous to nature’s super-food – the lowly banana. I learned the hard way as a youngster growing up in Africa that the banana peel keeps its delicate fruit safe until ready to eat.

Even though the monkeys in our neighborhood ate banana peels, they were definitely not fit for human consumption! I had to remove the protective skin before trying to eat the fruit.

Multi-level treatment
As a water treatment professional, your primary responsibility is to provide your clients with the very best water at a reasonable price in an environmentally responsible manner. You have many options available to protect your client and their entire home from chlorine and its dangerous disinfection byproducts.

The simplest option is a replaceable carbon cartridge, but it has a major downside of restricted flow and pressure. Most professionals should consider a whole-house (POE) system that meets consumers’ budget and performance requirements.

I always recommend the inclusion of bacteriostatic components in carbon filters and encourage the use of an automatic disinfection injection apparatus. This helps ensure that the carbon absorption/adsorption media doesn’t become a haven for bacteria.

Regardless of the system that is installed, make sure to properly disinfect it after installation with a non-chlorine disinfectant. Replace the carbon and other media on a regular maintenance schedule as recommended by the media and/or equipment manufacturer.

Always be sure to use dechlorination equipment that is manufactured to comply with NSF standards.