What Will the Next 12 Months Look Like For the Residential Water Treatment Industry? (Part 1)

For the past two years the editors of WC&P have provided the opportunity to dive deeply into market and economic data in an attempt to predict the year ahead. (See Can you Beat the Curve?, WC&P March 2007 and 2007 Was a Bad Year – Is there Worse to Come?, WC&P March 2008).

The intent of this article is to again try and predict the months ahead despite the fast pace of change and unprecedented upheavals occurring in the market. This is not intended to be a guide and should not be used as such.

Many water treatment businesses have already discovered that creating accurate budgeting and revenue projections for this year is tricky business. The chaos of the global downturn has led to giant multinational conglomerates like Unilever, Union Pacific and Costco to forego issuing annual earnings estimates for 2009.

If such enormous companies with tremendous accounting and finance assets have given up on annual projections, how can a small-to-medium sized water treatment equipment supplier expect to follow through on their own numbers? Chances are good that many in our industry have already modified their 2009 budgets, presumably written back in 2008, several times.

The head of Unilever Investor Relations was recently quoted saying “We’re not just going to provide numbers for the sake of it.” Few of us are in a position to say the same and keep our jobs.

Stable and predictable past
Back in 2007, making projections for the residential water treatment industry was relatively simple. Since 1990, the Water Quality Association (WQA) has released month-by-month shipment data for our industry as a service to its members.

For more than a decade and a half those numbers had grown in a stable and predictable manner – we were riding an economic expansion dating back to the mid 1980s and few of us could remember the last serious recession. Business was riding high as shipments of POE residential water treatment systems mirrored the boom in new home construction.

For 16 years in a row there was an approximate one-to-one correlation between POE systems shipped and new homes sold. From 1990 to about 2007, every time a new home was sold, our industry shipped a POE unit six to eight months later.

This is not to say that each new home sold got a softener or a filter…but the number of new homes sold (not permits applied for, housing starts or existing homes sold) was a very reliable predictor of where our industry would be in six to eight months. In 2007 this dynamic began to change as home construction in the US imploded. 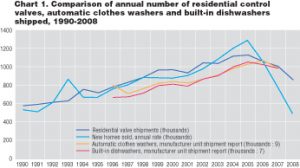 Statistical analysis going back to 1990 has proven that very few macro economic indicators have a direct impact upon POE water treatment systems shipped. Historically interest rates, unemployment levels, household debt ratios, inflation, household incomes and the CPI (consumer price index) have had little or no direct measurable impact upon residential water treatment sales – and this is still the case today.

What has changed dramatically is the number of new homes sold in the US since 2007 (Chart 1), with new home sales having dropped-off. Our industry’s shipments no longer track to new homes sold on a one to one basis – we now ship approximately two systems for every new home sold.

Although it would be easy to infer that POE system shipments were about to drop off a cliff and join new home sales with a 50 percent reduction in units, this is not what appears to be happening. It seems to be only an indication that using new home sales as a predictor of POE systems shipped is no longer valid. Instead of giving up on trying to predict the year ahead, it is time to find a new model. 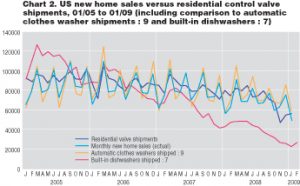 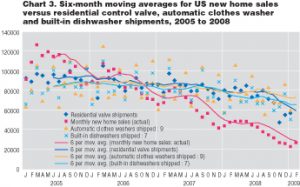 The appliance model
During initial research for the first article in 2007, a correlation between some appliance shipments and POE systems shipments was detected. Back then the numbers of appliances shipped were several times greater than the number of water treatment systems shipped and the new homes sold seemed a better predictor of future sales. After the chaos of late 2008 and early 2009, we returned to appliances to look for clues.

We have monthly figures for POE water treatment systems going back to 1990 and monthly figures for most major appliances going back to 1996 – so there are approximately 13 years of data available in which we can compare both. After scanning the data for refrigerators, microwave ovens, laptops, televisions, in home wine cellars and other products, it appears that only clothes washing machines and built-in dishwashers seem to track with POE water treatment equipment.

Both washing machines and dishwashers are volatile products – their numbers can vary greatly from month to month depending upon special sales, new model launches and other factors. By leveling out the monthly shipments of these two appliances with trendlines (Chart 3) we found that for more than a decade there have been about nine clothes washing machines shipped and seven built-in dishwashers shipped for every POE water treatment systems shipped in the US. This correlation appears to have held despite the downturn in new home sales and the impact this can have on both appliances and POE equipment.

It is also because they have to introduce new products often to satisfy evolving consumer trends. And it is because they deal in unit volumes that are several orders of magnitude greater than ours and because their supply chains are extensive and global.

The appliance industry recognizes that most economists have identified the current credit crisis and the housing construction downturn as two of the primary reasons we are currently experiencing a recession. Like our industry, the appliance business is strongly impacted by both.

When the chief economist of the North American Homebuilders Association (NAHB) predicted that the decline in sales of new single-family homes should end in early 2009, the appliance business was hopeful. The same economist did not predict a fast uptick in new home sales to previous levels – he felt instead that the decline would stop, paving the way for an increase in new home sales at a later date. That increase might be as far away as 2010.

The NAHB is also reporting significant recent declines and projected future declines in the remodeling market. Projections for major home additions, home maintenance and home repairs are also expected to drop in 2009.

The only other silver lining in the home construction market (after the projected halt in dramatic drops) is the report that the number of potential home buyers who can afford to buy new homes has risen to the highest levels seen in the past four years. This would appear to indicate that when the market turns, pent-up demand will ensure a quick turnaround in the new home sales market.

A lack of new home sales through the rest of 2009 explains part of the reason why appliance numbers are down – consumer fear seems to explain much of the rest. The CEO of BSH Home Appliance Corp. was recently quoted by Appliance Magazine stating, “the appliance market is highly affected by the consumers’ perceptions of the general economy.”

The world’s two largest appliance manufacturers are Electrolux and Whirlpool. Electrolux laid off 3,000 workers in Q4 2008 and has plans to lay off significantly more in 2009. Electrolux is also moving production to low-cost countries.

Whirlpool has announced its plans to lay off 5000 workers before the end of 2009. Its Chairman has stated that Whirlpool expects industry-wide shipments of major appliances to fall 10 percent in 2009.

What does it all mean?
The truth is that nobody can reliably predict the market for POE residential water treatment systems moving forward. In 2008 the number of systems our industry shipped declined by approximately 16 percent from 2007. These declines were most pronounced in the last quarter of 2008 as the credit crisis evolved.

Now that the decline in new home sales appears to be bottoming out we can probably expect that our industry won’t see further falls; but we also probably won’t see any significant recovery in this market either until Q2 2010.

In the meantime, POE systems shipments will be impacted by the ongoing tightening of consumer credit and low consumer confidence levels. I am projecting that the shipments of POE residential water treatment units will decline by 25 to 30percent in 2009 (from 2008 levels).

Another significant factor should be a softening of commercial markets – which until recently have been a reliable source of revenues as residential markets tightened. Commercial customers will be under increased financial pressure and will resist capital expenditures in general.

Water treatment dealers should be on the lookout for commercial customers where capital expenditures are being bumped all the way up to top management for review and approval, as often happens in tough times. I am also predicting that, barring additional unforeseen events, our markets will rebound in early 2010, the turnaround will be rapid and will reflect significant pent-up demand.

If my predictions for 2009-2010 are wrong, I’ll be relieved and have to console myself with the thought that two out of three years of correct predictions aren’t bad. If I’m correct, maybe it’s time to think about a consulting job on the side!

In these economic circumstances it’s important for dealers and other businesses to hang tight, work hard, make sure their customers pay on time, continue to manage costs, focus on service, offer new products, serve the existing customer base and align themselves with solid and reliable suppliers. There will be a shakeout in our industry – but those who survive and retain their key talent should reap significant rewards in the future.

In case you were wondering what the best-managed multinational corporations are doing to prepare their budgets and revenue projections in a fast changing market – they seem to be moving to a scenario-based forecasting model. Instead of trying to set targets for growth over last year, they are developing best-case, worst-case and most-likely-case scenarios on a monthly or quarterly basis and preparing action plans in advance that can be implemented should any one of the various scenarios play out.

To be able to plan this way managers need accurate and timely data to work with. These are not always available in small- or medium-sized businesses like ours, but they are excellent targets toward which to push.

The biggest opportunity for the residential water treatment industry in decades…and why we’re missing it.

About the author:
Andrew Warnes is the Senior Product Manager – Systems for Pentair Residential Filtration (a GE/Pentair Joint Venture). He has also previously served as the International Director of the Water Quality Association, and is a member of the WC&P Technical Review Committee He can be reached at +1-847-274-0595 or at Andrew.warnes@pentair.com.