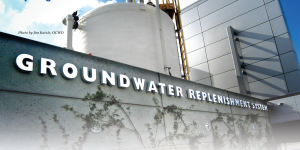 OCWD was formed in 1933 by the California State Legislature as a special district to manage the groundwater basin that underlies northern and central Orange County. The groundwater basin currently supplies 69 percent of the water needs for 2.5 million residents in the service area. The Orange County Sanitation District (OCSD), the local wastewater collection and treatment agency, is a partner in the facility.

The GWR System takes highly treated wastewater that would have been discharged to the ocean and recycles it to produce 70 million gallons per day (mgd) of purified water (265 million liters/day or mld). At full capacity, the system generates enough purified water to meet the needs of 500,000 people. Water purified by the system is of higher quality than all state and federal drinking water standards, similar to distilled water.

The operation helps maintain and improve the reliability of Southern California’s water supply, helps protect against future droughts and replenishes the groundwater basin with high quality water which helps protect the environment by reusing a precious resource. The facility also eliminates the need for OSCD to build another ocean outfall while providing diversity in the ‘water portfolio’ of the arid region, similar to the concept of a diversified financial portfolio.

Using more advanced treatment processes has significantly increased the total production volume, expanded the existing seawater intrusion barrier and adding a distribution infrastructure to recharge a portion of the water produced into the groundwater basin via surface infiltration.

This new facility uses approximately one-half the amount of energy that is required to transport water from Northern to Southern California. This saves enough energy to power 21,000 homes each year.

Sodium hypochlorite is added to MF feedwater to minimize MF membrane fouling. MF filtrate is fed to RO and MF reject streams are returned to OCSD for treatment. MF has demonstrated exceptional effectiveness as a pretreatment for RO. 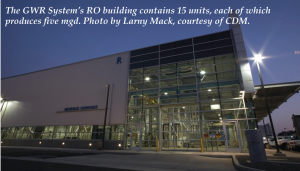 Based on a design recovery of approximately 90 percent, 86 mgd (325.5 mld) of filtrate is produced by MF. Excess filtrate is used to supplement tertiary non-potable reuse.

MF filtrate is then sent to the RO membrane treatment process. Feedwater passes through polypropylene wound cartridge filters prior to RO treatment. The RO process rejects most dissolved contaminants and minerals and this treatment reduces dissolved organics, pesticides, total dissolved solids, pharmaceuticals and viruses from the MF filtrate.

Generally, constituents with a molecular weight above 100 are removed by RO. A threshold inhibitor, or antiscalant and sulfuric acid are also added to minimize membrane fouling. RO concentrate or brine is discharged into the ocean via the OCSD ocean outfall.

With the addition of hydrogen peroxide, UV and hydroxyl radicals oxidize organic compounds for ultimate removal from water. UV and peroxide treatment is used for NDMA, 1,4-dioxane and other low molecular weight organic removal.

UV product water undergoes additional chemical treatment prior to groundwater injection and recharge. The pH is raised via decarbonation and then lime is added for stabilization. Decarbonation increases pH by reducing carbon dioxide levels in the product water though a degasification step.

MF/RO/UV/AOP product water is so low in mineral content that it has a corrosive nature. If not mitigated with the addition of lime, the concrete transmission pipe would corrode in the presence of the unstabilized water.

Participating in the project saved OCSD approximately $200 million (USD) by eliminating the need to construct a new, additional ocean outfall to dispose of increasing volumes of treated wastewater. Operating at its current capacity, the GWR System can reduce OCSD ocean discharge volumes by up to approximately 30percent.

The annual operating cost is approximately $30 million (USD), of which almost $8 million (USD) is being subsidized by the Local Resources Program from Metropolitan Water District of Southern California. With grants and subsidies factored in, the cost to recharge or inject GWR System water when the facility is operating at full design capacity is approximately $600 (USD) per acre foot (one AF= 325,900 gallons and 1, 233,665.7 liters).

Water quality During the start up of the AWPF, monitoring water quality was an important component of the permit issued by the Regional Water Quality Control Board, in conjunction with the California Department of Public Health (DPH). During acceptance testing of the AWPF, specific water quality tests were required to be run for the entire AWPF. 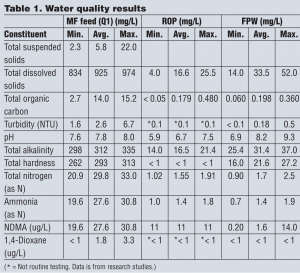 Water quality is available for MF feed (stream Q1), RO permeate (ROP) and finished product water (FPW) after lime addition. The primary measure of the plant’s performance is based on water quality parameters that include TOC, total nitrogen, TDS and NDMA.

Many of the water quality requirements are beyond those for primary and secondary drinking water standards. AWPF water quality was and is acceptable and the purification processes worked as designed. Based on this information, the plant construction was accepted.


Significant additional water quality data is collected by OCWD from a network of monitoring wells constructed between the seawater barrier and the surface spreading facilities that receive GWR System water. This allows recycled water to be tracked reliably and its quality to be demonstrated prior to its extraction by nearby water retailing agencies. Current DPH regulations require that recycled water remain underground for at least six months prior to its extraction for potable use. 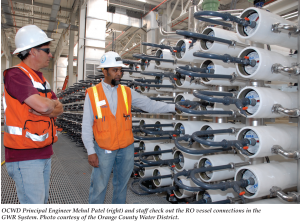 The first GWR System product water was injected into the seawater barrier on January 10, 2008 and the first delivery of product water for surface recharge occurred one week later on January 17. Over its first year of operation, plant production totaled 14,188 million gallons (53.7 billion liters).

During the initial period of operation, AWPF production has been limited by the flow available from OCSD due to diurnal sewage flow fluctuations. Between the hours of 2 am to 9 am, AWPF production is currently limited to an approximate flow rate of 35 mgd (132.5 mld).

A new OCSD lift station is scheduled for completion in May 2009. Once on-line it will allow continuous operation of the AWPF at its designed production rate of 70 mgd (265 mld).

More than a decade in development, the elected leaders of OCWD and OCSD were visionary in their pursuit of the GWR System and their understanding of water reuse and its potential as a new water resource for Orange County. The partnership between the two agencies is groundbreaking and has already significantly assisted in the advancement of water reuse throughout the world.

The GWR System has completed more than one year of successful operations. While there have been minor challenges along the way, water quality has consistently been excellent, meeting and exceeding all regulatory requirements. The next few months of operation will be dedicated to increasing production from the AWPF by treating more OCSD secondary effluent made available by the operation of the new OCSD pumping station.

About the author
Mike Markus is General Manager of the Orange County Water District (OCWD). With more than 30 years experience, Markus is known for his expertise in delivery of large projects, planning and water management. In his previous role as Assistant General Manager, he was responsible for implementing the GWR System project. Markus obtained a Bachelor’s of Science Degree in civil engineering from California State Polytechnic University at Pomona and a Master’s of Science Degree in civil engineering from the University of Southern California. He is a registered Civil Engineer (CE) in the State of California and has taught engineering classes at the University of Southern California.