Granular activated carbons (GAC) are the best available technology (BAT) to purify and protect global drinking water supplies. GAC can be manufactured from a wide variety of natural resource materials. Coal and coconut shells are the dominant raw materials to manufacture GAC for drinking water applications1.

All activated carbons are not the same. This variable family of activated carbons have fine micro-, meso- and macro-pore structures. Micro and meso pores are most useful for accumulating water contaminants 1. These sized pores can be revealed with the Gravimetric Rapid Pore Size Distribution (GRPD) test method.

Over the last nine years, PACS Laboratories has provided many applications for GRPD 2-16. A new application for GRPD is now being used to compare the difference between unused and used GAC in drinking water applications and other applications to reveal which pores are filled with adsorbates.

The unused GAC were Calgon F-400 (Y-334) and Norit 830 (Y-336). (The client has determined the definition of used. Virgin is an older term for unused and spent is an older term for used. Reference the American Society for Testing and Materials (ASTH International) for recommended terms17.)

All four samples were compared to each other and a commercially available PCB coconut-based carbon of approximately 1,200 iodine number. None of the samples had a weight loss greater than 2.3 percent on conditioning (heating the samples to 150º C (302º F) in argon and holding for 25 minutes).

Losses of less than eight percent indicate a well-stored sample that has been protected from moisture pick-up from ambient air during handling and storage and was also fresh and not oxidized. In terms of total adsorption pore volume, both unused samples out-performed the used version by 16.8 percent and 14.9 percent respectively. 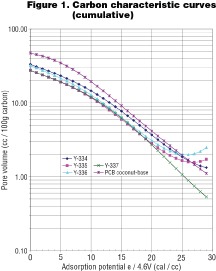 GRPD method summary
Each GRPD run measured over 300 adsorption and desorption data points covering seven orders of magnitude in relative pressure (isothermal basis) and three orders of magnitude in carbon loading. The mass adsorbed was also divided by the carbon mass to generate a weight percent loading for easier comparison.

The raw data is plotted (Figure 2) such that at 150ºC the adsorbent gas, C134a or 1,1,1,2-tetrafluoroethane (TFE), is introduced and loading increases as temperature is decreased. Mass loading was plotted against temperature but the relative pressure was also changing. There are three variables affecting performance that change from point to point: vapor pressure, partial pressure, and temperature. 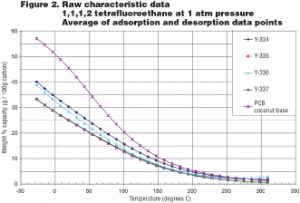 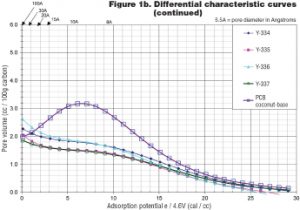 s and relative pressures was simplified. First the data was interpolated to get 30 evenly spaced points covering the entire data range. 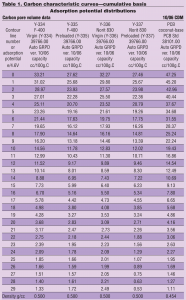 In the equation, y is the common logarithm of pore volume in cc/100g carbon and x is the e/4.6V adsorption potential in cal/cc. Characteristic curve polynomials are also noted (Appendix A.) 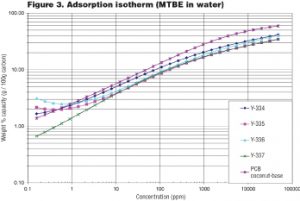 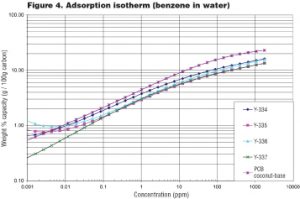 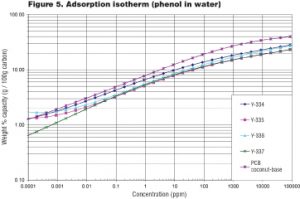 Pore size distributions
The Kelvin equation, modified by Halsey, can be used to convert the characteristic curve data to calculated BET surface areas or pore size distributions. This is not useful in terms of performance evaluations, but some audiences are more comfortable with the concepts of pore radius and a series of capillary sizes when thinking about activated carbon.

Cumulative pore size distributions (Figure 6) were included, but have little use. The single- and multi-point BET surface area was calculated from these curves. 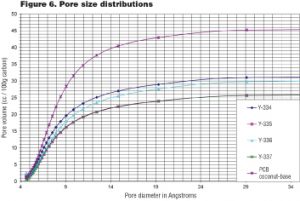 Conclusion
The amount of contaminants loaded onto GAC is directly related to influent concentrations. In drinking water applications, raw water has low concentrations that result in lightly loaded used GAC.

GAC is completely used when influent and effluent are equal. Drinking water GAC applications use three to20 percent of the original total pore volume in unused GAC. This pore volume difference between unused and used GAC can be revealed by the GRPD test method.

About PACS and the Authors
PACS is celebrating its 25th year of providing technical products and services for the activated carbon industry. PACS will host the 24th International Activated Carbon Conference and Courses program October 3-11, 2009 near Pittsburgh, PA.

Henry Nowicki, PhD, has 34 years of broad and deep activated carbon experience. Nowicki is a teacher in the Activated Carbon School and his short course is titled “AC Adsorption: Principles, Practices and Opportunities.”

Wayne Schuliger, PE, Technical Director for PACS, has 43 years of activated carbon experience. Schulinger is a teacher in the Activated Carbon School; his short course is titled “Design, Operation and Troubleshooting of AC Adsorbers.”

George Nowicki, BS, is an activated carbon chemist, having been at PACS Laboratories for 11 years. He combines business and technical skills for PACS Activated Carbon Services.

Barbara Sherman, BA, is the manager of operations, having directed day-to-day business and conferences for 25 years at PACS Testing, Consulting & Training.