Arsenic is a naturally occurring mineral that can be found in groundwater at various concentrations in regions of the world with specific types of geology. It has been known as a poison in high enough amounts for centuries. The physical effects on humans associated with drinking water with high concentrations of arsenic are well known and well documented.

While the US federal adoption of the maximum contaminant level (MCL) of 0.010 mg/L was set in 2006, plenty of discussion surrounded the topic prior to the official adoption and ever since. Arsenic reduction has for several years provided an opportunity for domestic POU/POE water treatment dealers to conduct business in regions of the country that have arsenic occurrence in the groundwater.

Many small water systems and individual well owners found themselves facing non-compliance with the federal requirements and looking to POU/POE as a solution. And POU/POE dealers, being the highly entrepreneurial folks that they are, were well prepared, ready, willing and able to offer solutions.

The NSF/ANSI Joint Committee on Drinking Water Treatment Units had been anticipating this need long before the federal standard was adopted. This volunteer group of manufacturers, regulators and users of water treatment equipment had been developing requirements for arsenic reduction claims for media filters through the consensus process mandated by the American National Standards Institute (ANSI).

Initially, a claim for pentavalent arsenic (As V, As 5+, or arsenate) reduction under NSF/ANSI 53 was adopted in 2003. Early in 2006, the group’s continuing efforts to develop requirements for arsenic reduction claims on media filters resulted in the adoption of a test protocol for reduction of trivalent arsenic (As III, As 3+, or arsenite). Adoption of this protocol meant that everything was established to allow POU/POE manufacturers to be able to substantiate a general arsenic reduction claim on their media filters.

Multiple required tests
Adsorption of arsenic via media filtration requires highly sophisticated and specialized technology. Many factors can affect the efficiency of arsenic adsorption. Iron concentration, pH and oxidation-reduction potential (ORP) of the water play key roles. Arsenic exists in water in either of the two forms or oxidation states as indicated above (pentavalent and trivalent). The affinity of various media for arsenic is strongly influenced by the oxidation state of the arsenic.

Generally speaking, media are more effective in treating water contaminated with pentavalent arsenic than in treating water containing trivalent arsenic. Because of the high degree of influence that these factors can have on arsenic adsorption media efficiency and the variability in real world conditions involving water supplies with arsenic contamination, there are four tests under different conditions required for a media filter to substantiate a claim of arsenic reduction (see Figure 1).

In order to increase reproducibility of the tests, all of them must be conducted under highly controlled conditions, with very specific water chemistry. The test water is prepared by initially removing essentially all of the soluble and insoluble substances from the water by treating it with RO and deionization. This process allows the testing laboratory to create very consistent test water through addition of reagents.

Various ions are added to this water using specified reagents in the proper amounts and sequence, much like following a recipe in a cookbook. This is the ultimate water chemistry achieved for testing of pentavalent arsenic reduction (Figure 2). Note that pentavalent arsenic concentration may be either 50 g/L (50 ppb) or 300 g/L (300 ppb). Manufacturers may select either concentration as the basis for their claim. 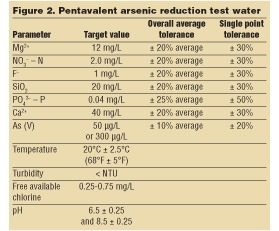 The 50 g/L claim is for those consumers who prior to 2006 did not require arsenic reduction; under the old guidelines their water had acceptable concentrations of arsenic. But these same consumers are now in need of treatment to bring the concentration below the 2006 promulgated MCL contaminant level of 10 g/L (10 ppb).

The 300 g/L challenge is based on the 95th percentile of occurrence of arsenic in water supplies. This means that 95percent of water supplies that have had arsenic detected have 300 g/L or less that need to be treated.

In practice, it takes several hours of lab time to add the necessary reagents to the tank of water, purge the oxygen by bubbling nitrogen through it and then confirm the concentrations of the various ions in the test water through laboratory analysis. All of this must be completed prior to using the water for testing purposes.

And, it must be done each day of testing, because the Standard requires that a new tank of water be created each day. These requirements make trivalent arsenic reduction one of the most labor-intensive tests in any of the NSF/ANSI Drinking Water Treatment Units Standards.

Challenging the test filters
Two test filters are plumbed to the test stand and conditioned in accordance with the manufacturer’s instructions. (NSF’s test stand for arsenic reduction testing is shown in Figure 3). Testing is conducted with a 60 psig dynamic influent pressure, at the highest achievable flow rate. 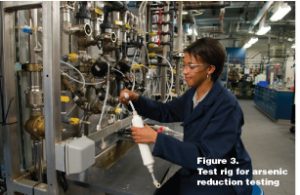 Non-plumbed batch systems may also be tested. After conditioning the filters per manufacturer’s instructions, they are then manually operated, as a consumer would use them at the daily usage rate recommended by the manufacturer.

The tests are concluded when the required percentage of the manufacturer’s rated capacity has been achieved. This is 120 percent for filter systems that have a performance indication device (PID), which is a volume-triggered filter change indicator. Filter systems that do not have a PID must meet the required performance through 200 percent of the manufacturer’s rated capacity.

Samples of influent and effluent from each test filter are collected six times throughout the test, at intervals specified in the Standard. The test filter must reduce the influent challenge to 10 g/L (10 ppb) or less arsenic in each test filter’s effluent at each sample point.

POU/POE meets consumer needs
In 2006, the US federal government promulgated a new MCL for arsenic. This meant that many consumers were now faced with issues of non-compliance.

These issues are certainly a health concern, but also a financial concern for those seeking to sell their homes. Mortgage lenders in certain parts of Michigan are requiring arsenic analyses on the drinking water for those homes with wells, in areas with known arsenic concentrations in the ground water.

The POU/POE industry foresaw this need and was ready to fill it. By developing products to treat arsenic, by understanding the complexities of these processes and by contributing to the NSF Standards development process to provide a basis for performance validation, the POU/POE industry was once again proactive.

The industry was successful in serving consumers. And this helped those customers to improve their health and enhance the value of their homes.

About the Author
Rick Andrew is the Operations Manager of the NSF Drinking Water Treatment Units Program for certification of POE and POU systems and components. Prior to joining NSF, his previous experience was in the area of analytical and environmental chemistry consulting. Andrew has a bachelor’s degree in chemistry and an MBA from the University of Michigan. He can be reached at (800) NSF-MARK or email: Andrew@nsf.org.