I’m Uninsurable? What Does That Mean? 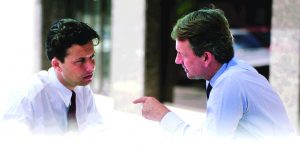 What’s involved in underwriting a life insurance application and what could be an obstacle to getting a policy issued? In the water conditioning and purification industry, there are two possible sources of insurability issues.

The first is chemicals. Those involved in the water conditioning and purification industry are not dangerous unless you drop a drum of one of them on your foot, or drink a couple of gallons of one of the smellier ones uncut. Chemicals do, however, present a possible insurability risk.

I have a client on total disability due to exposure to a chemical in a lumberyard. He is permanently out of work with neurological issues, so ceasing exposure isn’t going to help. Nobody else in the lumberyard is ill and it’s not a substance generally considered alarming. But, once in a great while, we have the situation of a severe individual reaction to a substance not otherwise dangerous.

Secondly there is the matter of physical labor. Repetitive motion injury becomes more of an issue as the masses increase and the convenient and ergonomically sound ways of shifting them become inconvenient. I had a client who’d ruined his back by the age of twenty-eight due to delivering potato chips, which don’t run very heavy to the barrel.

So it can happen to folks in the water business. I recall in the Boy Scouts getting a Tenderfoot to fetch, “Oh, five gallons or so,” of water. “Sure,” the kid would say, “no problem.” They have to learn some way.

First steps
Let’s presume for the moment that you have been overtaken by insurability issues in your business. What’s next? What does this all mean within your industry.

You can also use the business structure to get group insurance. Group term life insurance is, as you know, deductible as a business expense under Section 79 of the IRC. The insured employee does not have to report income if the benefit is $50,000 or less.

Group term life insurance is guaranteed issue. Companies will issue various amounts of life insurance and disability income insurance (which is also deductible) without reference to insurability. They simply do not ask questions.

The amount available varies from one company to the next, but is usually dependent on how many employees you have. We have companies that will do a good job for firms with as few as five employees.

Unfortunately, you may not use group term life to fund buy-outs or as key man insurance. It may only be used as a personal benefit, which means, generally, your family will be the beneficiary.

Still, this isn’t all bad. Having your family get money directly will certainly ease the difficulties involved in either winding up the business or rearranging it with the surviving partners even if the latter isn’t funded as neatly and efficiently as it might be if you were insurable. Your agent will be able to find some companies with liberal guaranteed issue limits for both life and disability income insurance.

Underwriting varies according to which kind of policy you want. A life insurance underwriter, for example, isn’t going to pay much attention to your having a bum knee. A disability income underwriter will be concerned about the knee.

But the disability income underwriter will give it more or less weight depending on what kind of impact a bad knee going sour could have on your job. In other words, how dependent on your knee is your occupation?

High steel work? That’s important. Accountant, not so much. Disability income underwriters are a lot fussier than are their life insurance counterparts. You’re a lot closer to being disabled than you are to being dead.

A life insurance underwriter won’t worry much about joint problems, with a couple of exceptions. One is if surgery is in prospect. They’d prefer to wait until you get safely away from the hospital. The other is that some of the more serious joint problems require serious medications whose side effects could, at least for some people, be dangerous.

So what is ‘dangerous’? Companies calculate their rates based on mortality tables, which take into account all people in the country. Then, with other tables, they calculate what it would look like if they kept out people with terrible weight problems, histories of cancer or heart disease and so forth. They quantify their underwriting standards.

Choices
So an applicant whose underwriting information falls within the numbers for a standard rate gets the standard rate. If there is something going on which increases the risk, the company has several choices.

The most severe is to decline. They will issue nothing. They can postpone the application, saying they’d like to look at it after some time has passed, to let new issues that haven’t yet shown a trend sort themselves out. That way, they’ll know what they’re facing.

The company can rate you. That is, they can raise the rate. Since many companies have up to six or even seven rate classes, you might not get that super-duper rate like the one they advertise on television because almost nobody gets it. You have to be a laid-back marathon runner whose great-grandparents lived ‘way past any reasonable age. I exaggerate, but not much.

So if you don’t quite make the height/weight ratio for the best rate, or the blood pressure table, or if you’ve been outside the country to what is sometimes called the developing world, or you have risky hobbies, they may simply rate you up one or two rate classes. This could be as much as fifty percent, or more.

They can add what is known as a ‘flat extra.’ This is usually done for applicants who have risky hobbies such as flying or skin diving. A flat extra for a student pilot, for example, could be $3.50 per year, per thousand dollars of insurance.

Since, for young folks in good health, the base rate for ten-year term could be sixty cents per year per thousand, the flat extra can be a hefty price to pay for your fun. But, once you achieve some certification, such as visual flight rules, or instrument flight rules, you can get the rating removed.

Crazy hobbies
As a general rule, extra insurance premiums to cover for risky hobbies is a modest part of the cost of doing whatever it is that you’re doing. When you have crazy hobbies, the company will usually offer you a choice.

That is, pay the extra, whatever it is, or take an exclusion. An exclusion for a flyer means that if he piles in while flying, the policy will not pay.

Other circumstances are covered as usual. No additional risk to the company—flight mischances being excluded– means no additional premium. It matters not how many exclusions, acknowledgments and amendments Joe Aviator signed. If he piles in, all the aviation community knows is that Aubrey isn’t paying Mrs. Aviator and all the little Aviators, who are currently starving. So if Joe Aviator insists on an exclusion, we will send him elsewhere.

One extremely important rule about underwriting is that you are not an underwriter. Don’t take yourself out of the game because you add up what ails you and decide all on your own that you’re uninsurable.

You might be right. But a good life insurance agent knows of companies that specialize in what are known as special risks or substandard risks. The latter has become less common in our vocabulary. Hardly anybody wants to be known as “substandard.”

Disability insurance
Disability income insurance also will offer exclusions, but these are different. Say, for example, you have a history of back problems. It is difficult, if not impossible, for the company to quantify the extra risk. So they will offer the exclusion.

If your back issues contribute to your disability, you are not covered. Take it or leave it. They may exclude from the exclusion the possibility of injury to the back after the policy is in force. So if your back just gradually goes out on you, you’re not covered.

But if you fall off your ladder cleaning the eaves, you are covered. Some companies take the position that a back which starts out being questionable is more likely to go all the way when injured than is a healthy back. And their exclusion will also exclude future injury.

Disability income applications come back with some sort of underwriting action on them about four times as often as life apps. That’s why I advocate that the time to get disability income was yesterday. The things that can sneak up on you, or smack you in the head with a wet sandbag and disqualify you for disability income are unfortunately quite common.

If you have a health issue which can’t be isolated, such as hypertension, the disability carrier will rate the policy, which is to say, increase the premium, if he does not decline it or offer reduced benefits.

Long-term insurance
Long-term care insurance is underwritten differently than either life insurance or disability income insurance. The key is what the policy covers, what it will pay for. If you have some kind of heart issue such as congestive heart failure that will gradually reduce your ability to live independently, the long-term care underwriter will be extremely concerned.

To make a hypothetical example, if you have a heart problem of some unknown type in which the heart will work just fine until, at some unpredictable moment it will just plain stop, that wouldn’t be a long term care issue. You wouldn’t be making any claims on the policy. I had an applicant tell me he had a heart catheterization scheduled shortly.

I called the company who told me that they’d look at him after the operation– they did and they took him at standard rates. Either his heart was in great shape, or it was going to stop on a dime. It was not going to run downhill and put him in a nursing home. I know. This sounds kind of cold-blooded.

The best solution of all remains to get your insurance before you have insurability issues; don’t put it off. You’re not an underwriter; don’t decide you’re uninsurable.

Let the professionals do that. If you are uninsurable, get guaranteed issue group life insurance.

A graduate of Michigan State University with a BA psychology, Richard Aubrey has been in the insurance industry for over 30 years. He has extensive experience in business insurance issues and insurability issues.