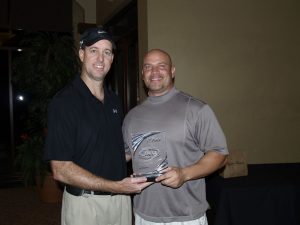 The LeverEdge/ISPC 6th Annual Invitational Golf Tournament, held in Florida during November, drew over 100 participants, including players from the companies’ vendor sponsors, dealers and company employees. The day included lunch, drinks, a barbeque buffet dinner and fun for all. Mark Shabes of The LeverEdge presented Steven Telesca of Florida Solar East with a trophy to honor the company’s tournament win with a score of 59.

Carbon Resources reported the Industry Forum and Joint Committee on Drinking Water Treatment Units (DWTU) Standards met recently to review NSF/ANSI standards. A task force on endocrine-disrupting compounds (EDC) and pharmaceuticals and personal care products (PPCP) proposed the possibility of a new standard to cover removal of these compounds. NSF/ANSI Standard 53 may not apply because the health effects are not clearly defined. A task force was formed to consider developing a new standard for sustainability/recycling. Various clarifications and improvements to existing standards were discussed to ensure the different certifying agencies are all using the same methodologies.

Applied Process Technology, Inc.’s HiPOx® process has been accepted by the California Department of Public Health as the first ozone-based technology accepted to meet disinfection criteria for unrestricted water reuse under Title 22, California Code of Regulations. Acceptance granted by the State of California is manufacturer- and product-specific to the HiPOx process for ozone disinfection. 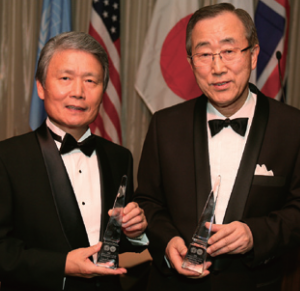 The Illinois Water Quality Association (IWQA) recently became part of the Illinois Association of Groundwater Professionals (IAGP). IWQA was founded in the early 1970s to support the professional growth of its members and to provide information to consumers. In recent years the leadership saw that maintaining an all-volunteer managed organization would be impossible to sustain and began a dialog with IAGP. After two years of discussion, leaders from both groups agreed on terms that would provide mutual benefit to both organizations.

Congress recently enacted the Virginia Graeme Baker Pool and Spa Safety Act to protect children from life-threatening injuries and deaths from potentially dangerous pool and spa drains. By December 20, 2008, all suction outlet fittings and covers manufactured, distributed, or sold in the US were required to comply with ASME/ANSI A112.19.8-2007: Suction Fittings for Use in Swimming Pools, Wading Pools, Spas, Hot Tubs, and Whirlpool Bathtub Appliances.

Nelsen Corporation announced it’s 55th Anniversary Sweepstakes! will offer the grand prize winner for 2009 their choice of a new 2010 Harley Davidson Motorcycle, Ford Mustang or Chevy Silverado Pickup. The new contest gives dealers more chances to win, with five additional first place winners to be chosen each month. Every Nelsen dealer in good standing will receive one chance for each $500 in invoiced merchandise (excluding freight and taxes). There’s no limit on how many times an individual dealer may enter. Dealers can also earn bonus entries through online sales, commercial orders or sales increases. No purchase is necessary to enter this Sweepstakes. Complete rules are available on the company’s website, www.nelsencorp.com.

Legris, Inc. announced the launch of a website dedicated to its Liquifit line of leak-free, push-to-connect fittings for the potable water and beverage industry. The site offers new features and benefits including product advantages, technical features, areas of application and events and exhibitions. Other features will be added in the coming months, including the capabilities to track orders, check stock and download CAD drawings and certificates of compliance online. Visit www.liquifit.net, email liquifit-info@legris.com or call (480) 830-0216 for more information.

Long-standing Canadian Water Quality Association member, EcoWater Canada, successfully completed a detailed process to receive Zerofootprint’s Certificate of Emissions Compliance for its water softeners and RO systems. A thorough analysis of the carbon footprint, from the entire manufacturing process to the final product delivery, determined the impact on the planet. The company will be purchasing carbon offsets to complete the loop and make the entire process
carbon neutral. 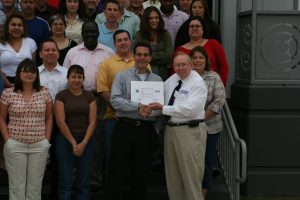 Rotobrush® International, LLC received the Patriotic Employer Award by the National Committee of Employer Support of the Guard and Reserve (ESGR). The award is given to those employers with policies and practices supportive of their employees’ participation in the National Guard and Reserve. Technical Support Representative Robert Yates, a specialist in the Texas Army National Guard, nominated his company for the award.

WaterStyle Holdings, Inc. (WSH) and UCLA jointly announced the licensing of certain key intellectual property for use in the water sector, Market Watch reported. The intellectual property focuses on advanced water systems, services and solutions for desalination, reclamation, reuse and sustainability. Under the terms of the license, WSH will have exclusive worldwide rights to this technology, which serves as the foundation for the company’s technology platform and systems capability.

Paddock Pool Equipment, Hayward, CA and A&A Manufacturing, a Division of Shasta, are the first companies whose products NSF has certified as compliant with the new anti-entrapment legislation. They were tested and evaluated to the requirements of ASME/ANSI A112.19.8 and NSF/ANSI Standard 50: Circulation System Components and Related Materials for Swimming Pools, Spas/Hot Tubs. Several other companies have also applied for certification.

The United Nations Educational, Scientific and Cultural Organisation (UNESCO), in partnership with the Commission for the Geological Map of the World, the International Association of Hydrogeologists, the International Atomic Energy Authority and the German Federal Institute for Geosciences and Natural Resources, has produced the first-ever groundwater resources map showing the location of the world’s shared underground aquifers. The high-res map is the result of close to a decade of discussions between governments, mediated by the UN organisation and reveals that 273 aquifers cross international borders – 68 in the Americas, 38 in Africa, 155 in eastern and western Europe and 12 in Asia.

Youngsters with eczema are being sought to take part in a study supported by specialists at Leicester, England hospitals, according to Medical News Today. The study aims to understand if softer water around the home can improve eczema in children. Researchers will look at the effects of deliberately softening all water in the home. Study recruitment started in 2007 and another 100 children are needed to reach the 310-participant goal. Contacted the Softened Water Eczema Trial team at +0115 845 8623 or visit www.swettrial.co.uk for more details.

SABIC Innovative Plastics invested in enhancements to its Fluid Engineering Center of Excellence in Bergen op Zoom, The Netherlands, to develop high-performance materials for water systems. The research center, which opened in 2005, gives global customers access to a wider array of testing equipment, more extensive and longer-term tests and expanded scientific resources to help them develop highly advanced, innovative fluid handling solutions. The Center’s mission is to identify, evaluate and help optimize resins and compounds for fluid handling.

The Inter-American Development Bank (IADB), Fundación FEMSA and the Tecnológico de Monterrey agreed to create the Latin American and Caribbean Water Center, with an initial investment of $11 million (USD), according to Water 21. The Center will be operated by Tecnológico de Monterrey and will jump-start programs and projects that support initiatives related to the use, management and conservation of water resources in Latin America and the Caribbean. IADB also approved a $200 million (USD) loan to expand potable water and sanitation services in the Buenos Aires metropolitan area and suburbs. The project is part of a wider program that aims to add 1.5 million users to the water service and 1.4 million to the sewer system between now and 2011.

Specialty chemicals group LANXESS AG was presented with the Top Rubber Award 2008 by renowned South American trade journal Borracha Atual, as best company on the rubber market. Brazilian synthetic rubber specialist Petroflex, a part of the LANXESS Group since April 2008, was also honored with an award in the synthetic rubber and elastomers category.

A total of 39 nominations from 19 countries were received by the deadline for the second Singapore International Water Week Lee Kuan Yee Water Prize 2009. The prestigious international water prize honors outstanding contributions by individuals or organizations towards solving the world’s water problems by applying innovative technologies or implementing policies and programs that benefit humanity. Almost half of the total number of nominations comes from the Asia-Pacific region. The winner will be announced prior to commencement of Water Week activities and the award ceremony will be held June 24.

The US Department of Health and Human Services (HHS) opened offices of its Food and Drug Administration (FDA) in Beijing, Guangzhou and Shangai in the People’s Republic of China. HHS Secretary Mike Leavitt and FDA Commissioner Andrew von Eschenbach, MD, will travelled to the three cities to meet with manufacturers and Chinese government officials to discuss policy and governance reforms aimed at improving the safety of food and other consumer products.

To accommodate increased demand for Waterlogic products globally, a third building has been added to the existing Waterlogic Manufacturing operations in China. The two-story facility will provide a combined 5,000 m2 (538,206 sq. ft.) of production space. The ground floor is in use exclusively for outgoing quality control (OQC) testing and finished goods holding, while the second floor will be used for manufacturing additional Waterlogic components.