Water is just water: A well-known fluid that freezes at 32 degrees Fahrenheit and boils at 212 degrees Fahrenheit, as long as we keep it under one atmosphere of pressure and add no osmolytes to depress its freezing point or elevate its boiling point.

That may be true in the bulk, but not when water is forced into nanometer-size pores, or surrounded by large biomolecules such as proteins. In those cases, an array of modern spectroscopic measurement methods tells us that water properties can be tailored extensively. As exotic as such conditions may seem, they occur everywhere around us, from water purifiers based on ceramic filters to water contaminated by biological residues.

Nanoconfined water molecules can be made to rotate or diffuse more rapidly, or they can be frozen into nano-sized ice sheets. Near biocontaminants, water absorbs low-frequency radiation more strongly, where normally it would have been transparent. Even water density can be lowered well below a gram/cm3. The design possibilities are endless.

Modern spectroscopic detection techniques can be used to monitor the unusual properties of water that is confined in pores, or between biomolecules, or stretched thin. In the examples discussed here, water has properties remarkably altered from the bulk fluid we are all familiar with.

Water pairing up with the protein ubiquitin is a good example. Ubiquitin is aptly named because this protein occurs in large quantities in all human cells, where it helps recycle other ‘used’ proteins. It serves as a good prototype of how large biomolecules interact with water.

Figure 1 highlights a large zone of water around ubiquitin that no longer behaves like the bulk. This is not just idle scientific play: Once taken up by a living organism, water is never more than a few nanometers from a large biomolecule such as a protein (about 1:250,000,000th of an inch, to put it in perspective). [INSERT FIGURE 1 HERE]

Likewise, groundwater stored in clays is never far from the surface of a pore, and we use clays and zeolites to purify water. Almost all the water in such pores or near large biomolecules is different from the bulk. This can create problems: if water is less mobile in such pores, the transport of contaminants could be hindered, and they could be trapped, only to be released later when temperature or pressure conditions change.

To look at the effects of water immobilization in pores, Jiri Jonas and coworkers investigated the motion of water in kaolinites, silica glasses and other nanoporous materials in the 1990s [1]. They used nuclear magnetic resonance spectroscopy, similar to MRI imaging of the human brain at hospitals today, to look at how water molecules move around in pores. The idea is that the two hydrogen atoms in water produce a small magnetic field. A large magnetic field pulse applied by the experimenter can align these magnetic fields temporarily, but when the pulse is turned off, they relax back to their original value. The time it takes to relax tells us how quickly water molecules tumble and reorient. Nuclear magnetic resonance uses radio waves (about 500 Megahertz) to detect that relaxation, not far from the frequency of radios or cordless phones. Jonas and his colleagues found that the wetting layer of water near the wall of the nanopore forms regular sheets with most of the oxygen atoms pointing in the same direction, and that these sheets hinder the diffusion of other molecules dissolved in water. Water has a volume of about 12 Å3, and a moderate-sized cavity in a zeolite, such as used in water purification or laundry detergents, is about 120 Å3. When ten water molecules are packed into such a cavity, all but one would be in the wetting layer on average. 90 percent of the water molecules in a filter do not transport contaminants in the way expected from the bulk. They may either slow down the diffusion of contaminants, or in some cases, by excluding them from the surface layer, they could speed up diffusion. Thus tailoring how water interacts with the filter material could have a large effect on how impurities are retained or flushed through. Design properties at the molecular scale have a direct effect on the large-scale behavior.

Biomolecules are an important contaminant of water, from bacterial metabolic products to human food wastes. One could use nuclear magnetic resonance to see how biomolecules affect water mobility, but the technique is only sensitive to one or two layers of water on the surface of a biomolecule, when the effect could be far ranging.

Now we fast-forward from 1990 to 2008, when a new technique for studying water in the presence of biomolecules has become available: Terahertz – or far-infrared- spectroscopy. This form of spectroscopy uses electromagnetic waves with a frequency of about 10,000,000 Megahertz, or 10 Terahertz, a considerably higher frequency than radio- or microwaves, but still much lower than infrared or visible light.

Far infrared light has been used in research laboratories for many decades, but only recently have laser-driven Terahertz systems become powerful enough to probe water. The reason is that water absorbs Terahertz light much more strongly than radiowaves or microwaves do [2].

A typical microwave oven penetrates a few inches into a layer of water, a three Terahertz beam only about a thousandth of an inch. That makes it harder to get the Terahertz beam into the water, to find out how water molecules are moving around.

The radiation cannot excite the water molecules any longer, so the ice is transparent. But biomolecules have quite the opposite effect. Pure protein absorbs Terahertz light even less than water, but when mixing the two, one gets more absorption of terahertz light than from either water or protein alone [3].

What is the explanation? The protein actually makes water within a one to two nanometer layer near its surface move about more flexibly than it did before, at least at a frequency of three Terahertz. Thus water near a protein is more absorbing and less transparent.

Just like zeolite or clay nanopores, biomolecules modify the way water moves on a picosecond time scale. Picoseconds may seem so fast that one would not care, but a cascade of motion, referred to as ‘slaving of slower motions to fast motions’ by Hans Frauenfelder, means that those picosecond events ultimately affect much slower time scales, such as when water and biomolecules mix, or their separation is attempted.

We now have instruments that can directly follow the very fast dynamics of water molecules as they dance together with biomolecules. Kinetic Terahertz Absorption Spectroscopy (KITA for short) monitors Terahertz pulses going through a water-protein solution with high time resolution, following the rearrangements of the water layers surrounding a protein from picoseconds out to seconds.

Water motion turns out to be very important for the process of protein folding. Protein folding, during which a chain of amino acids folds into a well defined structure (as in figure 1), occurs in all organisms after a protein has been made by the ribosome from amino acids.

Figure 2 shows a schematic of the KITA instrument. It took the water molecules only a few milliseconds to adapt to the changing shape of the protein [4]. On the other hand, fluorescence spectroscopy reveals that the complete folding process takes over a second. Thus, while folding to the final structure of a protein may be relatively slow, the early stages, guided by water rearrangement, are quite fast. The water shell around proteins helps kick-start the folding process. [INSERT FIGURE 2 HERE]

Water can visibly alter the stability of biological molecules it comes into contact with, and no process highlights this better than artificially stretching water that contains protein molecules. To this end, physics graduate student Edgar Larios in my research group adapted a clever idea invented by Berthelot in 1850 [5].

Larios put water and protein into a tube, pumped on the liquid with a vacuum pump to make sure no air remained, and then sealed the tube leaving a small vapor bubble at the top. He then heated the tube, making the bubble disappear by the expansion of the water.

But when he cooled down the tube, the bubble did not reappear. Instead, the water stuck to the walls of the glass tube because of surface tension, and was stretched to a density of about 0.95 grams/cm3, as opposed to the usual one gram/cm3. The protein inside this stretched water became less stable than in normal water.

We know this by doing nuclear magnetic resonance spectroscopy, and observing the relative size of two peaks in the spectrum: one peak corresponds to the unfolded protein, another to the folded protein. The relative strength of these peaks switched when the water was stretched (figure 3). [INSERT FIGURE 3 HERE]

To summarize, pores and biomolecules have a profound effect on the microscopic motions of water, and vice-versa. These motions can be amplified to the macroscopic scale, so water is not a passive solvent.

Dr. Martin Gruebele is with the Departments of Chemistry, Physics, and Biophysics and Computational Biology at the University of Illinois at Urbana-Champaign. Earning a Ph.D. from the University of California at Berkeley in 1988, Dr. Gruebele focuses on experimental and theoretical understanding of the dynamics of complex molecular systems, including those of large molecular size, and their interaction with their environment. 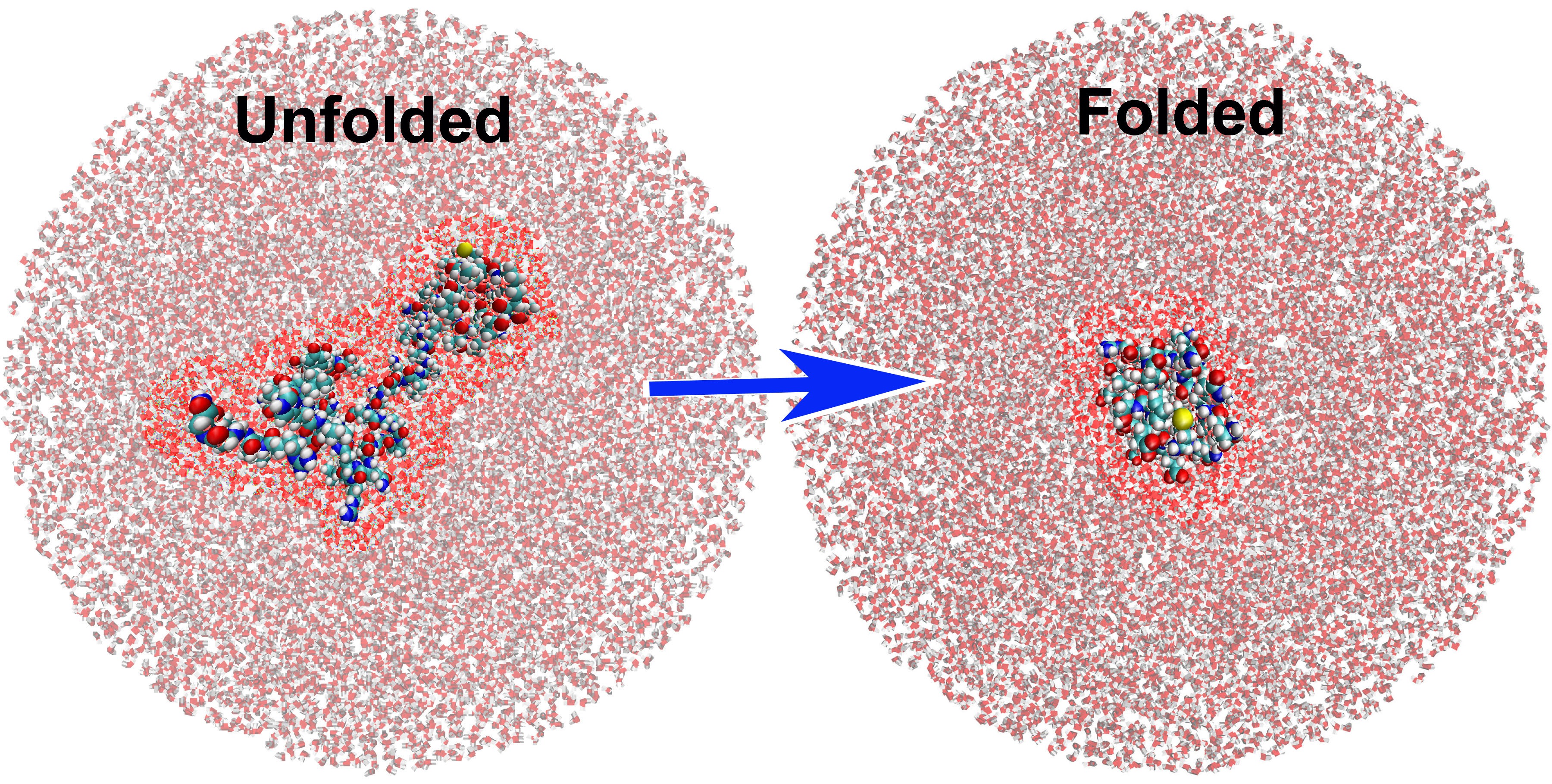 Figure 1: Molecular dynamics simulations of the unfolded (left) and folded (right) protein ubiquitin in water. A zone of water determined by Terahertz spectroscopy to be unlike the bulk is highlighted. 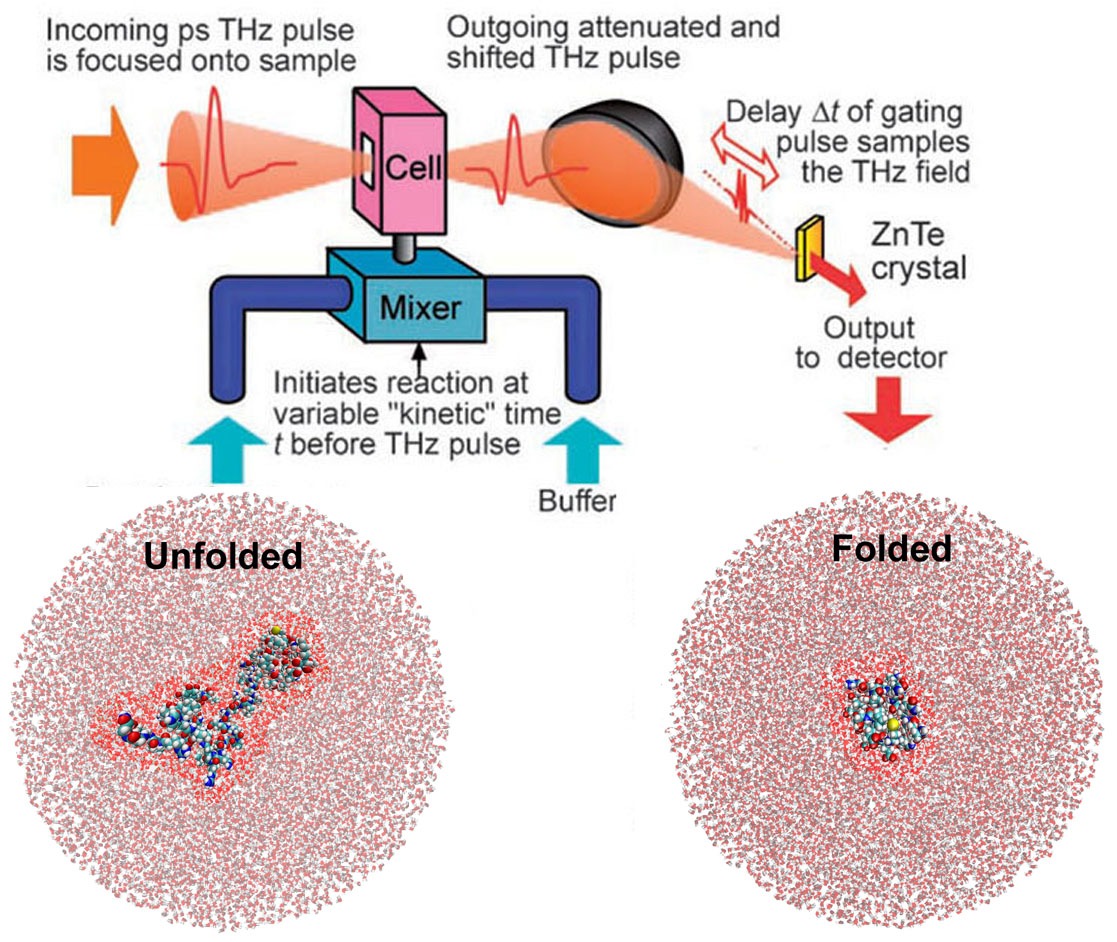 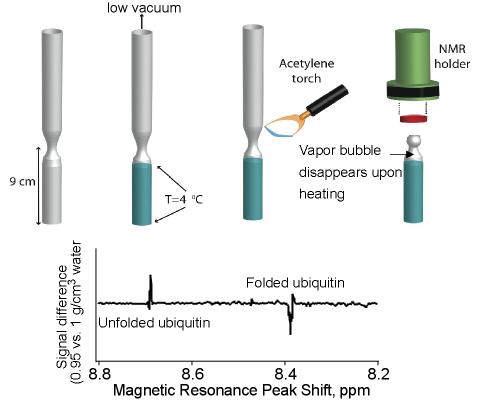 Figure 3: Stretching water and its effect on the stability of the protein ubiquitin: the protein is less stable in stretched solvent, corresponding to the opposite signs of the two peaks in the spectrum.