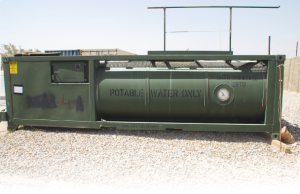 Unlike many other bases in Iraq, however, FOB Delta is also testing grounds for the Expeditionary Water Packaging System (EWPS). According to information supplied by the manufacturer of the EWPS, “The United States ships about one and a half million bottles of drinking water into the southwest Asia theater each day. With sources in Europe, the eastern Mediterranean and around the Gulf region, water is shipped hundreds, if not thousands of miles, usually by truck, to reach its ultimate destination.

“Transportation costs are a major part of the $190 million (USD) spent on this packaged water in one year. Some 60 percent of the available trucks in theater are dedicated to moving water, rather than other vital military supplies. And these trucks are subject to great risk and are frequently attacked by hostile forces in the region.”

System value
EWPS is a unit designed to mitigate these logistical issues by bottling fresh drinking water at its source. “In Iraq they have few bottling plants and it costs a lot to ship the water,” said Daniel P. Parent, electrician and acting EWPS supervisor at FOB Delta.

“Shipping through convoys is dangerous and it’s expensive. So, the Army is considering having a bunch of smaller plants to cut down the shipping costs and mitigate dangers by reducing the number of water convoys.”

With the 7th Sustainment Brigade being battle space owners of FOB Delta, they have been able not only to witness the EWPS’s introduction into the Iraqi theater of operations, but have also been able to assist those operating it in order to ensure the smoothest possible operation of the unit.

“The main thing we do is assist when situations arise that affect the EWPS operations,” said Master Sgt. Christopher Cosby, 7th Sustainment Brigade FOB Delta liaison officer. “If they have a problem and need something I try to find it, be it gloves, masks or parts to use until the items ordered can catch up to them.”

About the author and company
Sgt. R.J. Gilbert is with the 7th Sustainment Brigade Public Affairs Office, working with the 3d Sustainment Command (Expeditionary) Force Forward Operating Base Delta at Balad, Iraq. The EWPS system is manufactured by DRS Technologies in Parsippany, New Jersey.