The Making of a Veto

The POU/POE water conditioning and purification industry was elated with the recent decision by California Governor Arnold Schwarzenegger to veto AB2270. This controversial bill targeted residential self-generating water softeners only and would have eliminated many procedural hurdles and made it easier for local municipalities to ban them without due process because of brine concerns.

Institutions such as WQA, PWQA and various industry and retailing organizations fought long and hard to defeat this bill by securing the Governor’s veto. And there are valid concerns as to how this bill even came about, how it was defeated and how it might come up again.

WC&P recently talked with leading figures involved in this battle to discuss the chain of events and what might be expected in the future. The industry has received a clear message that this issue isn’t going away. 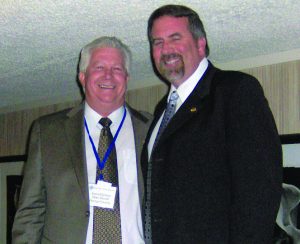 State of California Assemblyman Michael D. Duvall (left), a primary industry supporter who helped fight and defeat AB2270, was on hand at the recent PWQA meeting to introduce and help honor Assemblyman Doug LaMalfa (right). LaMalfa, an active rice farmer in California, was chosen ‘Legislator of the Year’ by PWQA for his leadership and support in helping to defeat this legislation.

“Past opponents of water softening have targeted the industry before and continued to do such in 2008,” according to Pete Conaty, governmental relations specialist with Pete Conaty & Associates in California, the lobbyist for the industry in California’s capitol of Sacramento. “Every time in the past that the opposition has brought up some drastic legislation, we have been able to reach an agreement to avoid this type of business oppression.

“They seem to eventually always have ‘buyers remorse’ and bring back additional demands. But we have been successful in these negotiations in the past, even though the environmentalists outnumber industry lobbyists 10 to one in Sacramento.”

“But this year, they chose not to negotiate due to expressed concerns over salinity expansion. They wanted to throw away 18 years of legislative history and start fresh,” adds Conaty. “With no scientific background or reasoning, they chose to target the outright banning of water softeners.

“We were able to provide an industry-wide response from PWQA, WQA and business leaders like Culligan to help fight this bill. Grassroots lobbying, which included the industry getting their customers involved and stepping up to the plate with letters of opposition, seemed to make a difference with party line supporters of business in the legislature as well as the Governor’s office.”

“Culligan also started a website which the industry used as a platform for communications,” notes Conaty. “There were also advertisements in the newspaper about the intrusion of AB2270. It was a total team response and effort; the industry came together. That is what garnered our victory.

“It is important to remember that the battle may be over, but the war is not won. The equivalent of over 40 rail cars of salt migrate naturally into ‘the valley’ each day, so salinity is a real problem for the area. We need to be more proactive with industry, agriculture and home POU/POE users to provide solutions, not just opposition.” 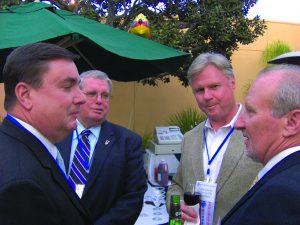 California State Assemblymember Joel Anderson from the 77th District says it is vital for businesses to be a proactive part of government. He notes it is a new cost of doing business, particularly in California.

“No one cares about your business more than you do! If you expect any legislator to care more than that about your employees, customers and enterprise, you will not be in business long,” Anderson notes.

“There are forces in the legislature that have extremist and radical agendas and views. Many would just as soon put all private business out of operation, capture their assets and lands and return the area to ‘rural California’ with no residents or business.”

“With about 40 new legislators being elected in California for 2009, expect 3,000 or so new bills to be introduced next year,” notes Anderson. “Industries like water conditioning and purification have to stake out goals, follow them up and chase them down in California.

“We are simply not in a state that embraces business or wants it to grow. This viewpoint is supported through the tax structure and general environment that exists. It is also supported by the fact that a water crisis, a prison crisis and a pending power crisis have been allowed to develop and exist here.”

“Without business involvement in government, too many issues will be ignored and left to the next generation to properly fix,” Anderson says. “If business does not speak up and become the ‘squeaky wheel,’ it will be overlooked and may not be with us long.

“Businesses have left and are leaving California by the droves, which is especially difficult in a challenging economy. All businesses, retailers and consumers (the ‘buying public) need to be educated and solicited to support POU/POE water issues. The lack of success will create a danger for the water conditioning and purification industry.”

Long-term solutions
“We as the industry, through our members and manufacturers, need to lead the development of new innovations and hybrid solutions in the next five to 10 years for water softening,” according to Peter Censky, Executive Director for the Water Quality Association (WQA). “We cannot keep fighting this battle legislatively with California or other states; we have to fight it technologically.

“There is not a great deal more efficiency you can get out of an ion exchange water softener and our industry has improved this great technology about as far as it can. We need to work to remove old-style, clock-timed and inefficient units from homes and replace them with new softening technology.”

“We simply have to remove our industry from the growing salinity battle,” notes Censky. “While we may not be a major cause of the problem, we appear to be an easy target.

“Technological solutions will allow the industry to continue to serve its customers while avoiding this trap. It will increase our industry’s sales opportunities and turn us into smart, green business people.”

“We also must develop new commercial and industrial application approaches,” adds Censky. “Many older design concepts are over-engineered, which leads to over-salting into the waste stream.

“If our industry is regulated out of business, no one else in the marketplace has the technological know-how to improve, replace or upgrade these systems. Laundromats, hospitals and other small systems use tons of salt and there is a great opportunity here to upgrade and improve these types of systems.”

System and service blending
“Hybrid systems need to be developed, just like what has been done with cars,” adds Censky. “Blending old and new technology can make a difference.

“There may be ways to recapture brine that could be made practical and affordable. And while potassium chloride actually puts more TDS into waste streams than salt, it can be reused in some areas as a fertilizer.”

“We also need to more closely link our members with the septic and the well-drilling industries,” concludes Censky. “Consumers should not have to deal with multiple vendors to solve the same problems; the industry segments need to work more closely together or even merge as some in the marketplace are already doing.”

“This type of action and focus is not the end of our industry. It is just the beginning for us to move to a new level and to help eliminate salinity as an issue.”

Challenging future
“Our industry has several options to pursue, but most importantly we have to be proactive in developing our future,” says Mike Mecca, 2009 Pacific Water Quality Association President and Director, Technical Services & Product Development, for Performance Water Products in Buena Park, CA.

“We can no longer just be on the political defense. We have to be progressive with government on both sides of the aisle. We plan to introduce proactive legislation that will call for an inventory of residential, commercial and industrial salinity producers in California.”

“We see a lot of ‘low-hanging fruit’ with old and inefficient equipment that can help resolve the salinity concerns in our state,” notes Mecca. “This could lead to the potential of a bill to provide tax incentives to residences and businesses to replace or upgrade these systems, which also creates more opportunities for our industry.

“And, we must help the State of California look at itself through full-time lobbying. During our investigation of AB2270, we discovered that state government is the largest user of salt in California, based upon bid contracts with the salt company producers.”

“California is thus the largest producer of salinity brine, which is one of the premiere points we were trying to make in our lobbying efforts,” notes Mecca.

“Many in government contend this is because they are responsible for protecting the assets of the state.

“Our universities and our prisons are all of our responsibility and we want to protect them as well. But we also want to protect the right of the consumer to utilize the dishwasher they bought to the highest level of technology possible.”

“This proactivity will allow California to step up and lead the nation and the world in solving the brine discharge problem,” concludes Mecca. “We are going to help bring everything out into the open, take a look at the salinity issue from all sources and determine what we can help control as an industry. The targeting of residential softeners is simply unfair to consumers.

“Salinity is a valid concern for California. We live in a desert area, we irrigate it and we are surrounded by salt. Most water provided to our state is out of standard before it reaches the home or business. But I am optimistic we can help our state make some sense out of the whole situation, provided all sides develop the best solution for the future and not dwell upon the issues of the past.”