Cation exchange water softening is a well-known, well-understood technology that is successfully employed in many hard water regions of North America as well as internationally. There is an American National Standard for testing and certification of these products – NSF/ANSI 44. Many readers may be familiar with the concepts of softening capacity, pressure drop, accuracy of the brining system and other requirements of this standard. But do you know the details?

This column will help to provide those details, including the conservative testing requirements and nuances of scope present in the Standard. As you will see, the requirements are well thought out based on the considerations involved with the safety and operation of residential water softeners.

A question of scope
NSF/ANSI 44 defines a residential softener as a regenerable cation exchange system with conventional plumbing fittings not exceeding 1.25-inch (31.75 mm) NPS (nominal pipe size). Any softener with an inlet exceeding 1.25inches is not considered residential, at least for purposes of NSF/ANSI 44 and falls outside the scope of the Standard.

Notice that the definition is not related to resin tank size, amount of cation exchange resin, or system salt settings, but is based solely on the inlet size of the control valve. Also note that any physical or magnetic water conditioning systems are outside the scope of NSF/ANSI 44, because the standard is limited to cation exchange systems.

Disposable cartridge filters containing cation exchange resin fall outside the scope of the Standard. This is because, although some do use cation exchange technology, they are not regenerable.

POE systems under NSF/ANSI 61
In late 2007, the scope of NSF/ANSI 61 was revised to include POE systems and components. This means that water softeners can be certified either to NSF/ANSI 44, NSF/ANSI 61, or both.

Obviously, NSF/ANSI 44 is a much more comprehensive standard for POE water softeners than NSF/ANSI 61. For this reason, NSF recommends that POE softeners be certified to NSF/ANSI 44.

A multitude of tests 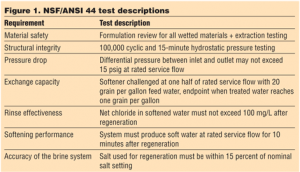 A summary of the testing requirements of NSF/ANSI 44 is included in Figure 1. A formulation review for all materials in contact with drinking water and material extraction test is required to establish that no contaminants leach from the softener at concentrations of toxicological concern.

A total of 100,000 cyclic and 15-minute hydrostatic tests are required to establish the long-term durability of the system as well as its resistance to pressure spikes. A pressure drop test confirms that the softener will not cause a drop of more than 15 psi in line pressure when operated at the manufacturer’s rated service flow.

Softener capacity is determined by testing at one half of the manufacturer’s rated service flow. The feed water must have a hardness of 20 ± two grains per gallon. Capacity testing is required at the lowest and highest salt settings and the setting closest to the mid point of the range of salt settings.

Capacity for other non-tested salt settings is interpolated from the three measured capacities. Extrapolation is not allowed, so testing at the low and high salt settings is critical. Each test of capacity is conducted by first regenerating with a precisely measured amount of saturated brine. The softener’s brine system is not utilized due to potential variation in the amount of regenerant salt.

The end point of the test is defined as one grain per gallon breakthrough in the softened water. The hardness leakage throughout the run is subtracted off when the capacity is determined, so that capacity is reflective of the exact amount of hardness removed. Three successive runs within 10 percent of the average of the three runs are required, with the average value being considered the official capacity at that salt setting. See Figure 2 for a graph of an example capacity run. 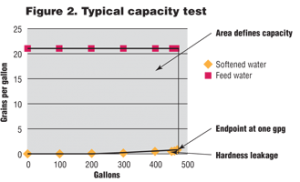 During capacity testing, the amount of residual chloride in the softened water is measured after regeneration. The net increase in chloride concentration from the softener may not exceed 100 mg/L. This indicates that the rinse is sufficient to rid the softened water of excess salt.

A separate test known as ‘softening performance’ is required. This test involves regeneration of the softener at the lowest salt setting and operation at the manufacturer’s rated service flow. Samples of product water are taken each minute for 10 minutes and the hardness of the water may not exceed one grain per gallon for any of these samples.

Because the brine system is not used when conducting capacity testing, accuracy of the brine system must be determined through a separate test. This testing is conducted at the lowest and highest salt settings and the setting closest to the mid point of the range. It involves weighing the brine tank before and after regenerations and three successive runs within 15 percent of the nominal salt setting must be achieved.

For example, a 10-pound salt setting successful brine accuracy test would require the weight of the brine tank to decrease by 8.5 to 11.5 pounds, after each regeneration, for a series of three regenerations. There is an alternate procedure that may be used for time-controlled brine systems, involving calculations based on saturated brine.

Softener efficiency
In this day and age of potential bans on water softeners due to concerns about salinity, efficiency is a very hot topic. Although efficiency is not required for certification to Standard 44, it may be required by state or local regulations.

This is true especially in western states like California that have water salinity problems. And states that currently do not have efficiency requirements for softeners may be moving in that direction.

Efficiency is calculated from data measured and recorded during capacity testing. The requirements for efficiency are included in Figure 3. Only demand initiated regeneration (DIR) softeners may claim efficiency. A softener must achieve both salt efficiency and water efficiency in order to be ‘efficiency rated.’

Also any efficiency specifications or statements must refer to the salt setting at which the efficiency was achieved. The State of California has a more stringent requirement for salt efficiency ratings than does Standard 44, requiring at least 4,000 grains of capacity per pound of regenerant salt.

Conformance by calculation – certification of families of softeners
Standard 44 includes procedures to calculate pressure drop, capacity and efficiency for softeners that are similar to the test unit. There are specific requirements for softeners to be considered ‘similar,’ including:

The concept is that a line of softeners built with the same control valve can be certified based on testing one or a few of them and then using calculations included in the Standard to calculate pressure drop, capacity and efficiency for the non-tested models. The limitations are designed to keep only softeners that function similarly in the same family.

The equations used for calculations have proven accurate in practice. Conformance by calculation allows manufacturers to certify broad lines without unnecessarily testing each one of many very similar softeners.

A comprehensive standard
As you can see from this brief overview, Standard 44 requires testing all relevant aspects of water softeners, from material safety to accuracy of the brine system. This means that a number of tests are required, each one designed to evaluate different aspects.

This is in contrast to Standard 61, which requires an evaluation for material safety only. Although POE softeners may be evaluated under and certified to either one, the comprehensiveness of Standard 44 makes it the clear choice.

About the author
Rick Andrew is the Operations Manager of the NSF Drinking Water Treatment Units Program for certification of POE and POU systems and components. Prior to joining NSF, his previous experience was in the area of analytical and environmental chemistry consulting. Andrew has a bachelor’s degree in chemistry and an MBA from the University of Michigan. He can be reached by phone at 1-800-NSF-MARK or by email at Andrew@nsf.org .