What Does E. coli in Water Really Mean?

The headlines are abundant identifying positive test results for E. coli everywhere from tap water, private wells, beaches, swimming pools, and food — to my personal favorite — elk droppings in Colorado! But what does the presence of E. coli mean in terms of public health?

There appears to be confusion in the water industry over the different types of E. coli present in water and what it does or doesn’t indicate. The following is a brief overview of one of the most well known and often the most misunderstood microbe associated with water quality.

What is E. coli?
E. coli, aka Escherichia coli, is a bacterium found in the feces of all warm-blooded animals. First discovered by Theodor Escherich in 1885, E. coli is part of the normal gut flora and benefits humans by producing vitamin K and competing with other pathogenic bacteria, preventing their establishment in the intestine.

Most strains of E. coli are completely harmless and –assuming warm bloodedness–you are constantly exposed to the bacteria and probably even bathing in it. A pair of underpants, on average, harbors 370,000 E. coli due to transfer from the skin. The bacteria were considered strictly commensal — meaning naturally present and harmless — organisms of the large intestine until about 1935 when it was first associated with an outbreak of diarrhea in infants.

A quick search of E. coli on the web, however, usually leads one to sites describing illnesses such as diarrhea, severe cramps, kidney failure and death. These reports are referring to the relatively rare type of E. coli known as serotype O157:H7.

Understanding that the species E. coli is further divided into many different types of strains and serotypes is the first step in relating the presence of the bacteria to specific health risks.

Water quality indicator
Currently, there are over 700 genetically different types of E. coli identified and in humans, are usually colonized within two to three days of birth. Many of us will have multiple types of E. coli growing simultaneously in our gut and these different populations appear to be in constant flux.

The number relative biomass of various strains changes three or four times per year. Although it is not the most concentrated bacteria in the intestinal tract, making up less than one percent of the total biomass, it is consistently present and thus, a logical indicator of fecal contamination in food and water.

Sources of fecal contamination in the environment include wastewater treatment plants, septic systems, domestic and wild animal manure and storm water runoff. Direct testing of individual pathogens isn’t cost-effective or practical, however, persistence of E. coli in feces led to its use as a routine indicator to monitor fecal contamination in food, water and the environment, where it was expected to warn of other enteric pathogens such as Salmonella, Shigella, hepatitis A virus and Cryptosporidium.

Use of this standard indicator monitoring system has been highly effective for indicating presence of disease-causing bacteria, such as those associated with typhoid, dysentery and cholera. But it is less effective for determining presence of viral and protozoan pathogens that have very different survival, transport and growth characteristics.

Finding any type of E. coli in drinking water should result in immediate action. The public must be protected from potential exposure to harmful pathogens due to contamination or treatment failure. An E. coli positive test, however, doesn’t necessarily mean that the severe O157 type is present, or any other pathogen for that matter.

Routine laboratory tests used for water quality monitoring do not differentiate between types of E. coli and likely select for the regular, commensal strain. Furthermore, E. coli is able to grow in some environments outside of mammals and may persist long after the original contamination event occurred. Thus while the presence of E. coli indicates a greater likelihood of public health risk, most outbreaks that occurred from public utilities were not correlated with E. coli detection.

Pathogenic E. coli
Some strains of E. coli are harmful to human health. Diseases caused by various strains include urinary tract infections (UTIs), neonatal meningitis and diarrhea. The bacteria is known to be responsible for 90 percent of UTIs, meningitis in one in 3,000 infants and an unknown number of diarrheal illnesses ranging from mild to fatal infections. 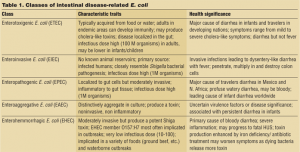 Virulence properties may include adherence factors, invasive characteristics, motility functions, immunity resistance, toxin production and others. About six serotypes are associated with 95 percent of outbreaks over the last two decades.

One type of E. coli is particularly deadly (serotype O157:H7), causing severe hemolytic uremic syndrome (HUS) in a small percentage of people exposed (usually young children and the elderly). HUS leads to hospitalization and sometimes debilitating or fatal organ failure and chronic effects from the disease may last a lifetime for survivors.

Also known as Enterohemorrhagic E. coli, the O157:H7 serotype is the most common infectious cause of bloody diarrhea in people in the US and HUS is the primary cause of acute kidney failure in US children. While it is not typical to find O157:H7 in municipal treated drinking water, there have been some major outbreaks associated with both private and public water supplies.

Once infected, symptoms of diarrhea and severe cramps begin in about three to four days. Within another one to two days, the diarrhea becomes bloody and within a week about 92 percent of those exposed recover from the disease, while an estimated eight percent progress to HUS. From 1982 to 2002, there were 350 documented outbreaks of O157:H7 where of the total number ill (8,598), 15 percent were due to drinking water exposures compared to 61 percent linked to food.[2] Produce and ground beef are top offenders.

Cattle are known to carry the organism, often without evidence of disease and spread the bacteria to other animals and humans via fecal contamination in the environment where water and food supplies are vulnerable. During slaughter, beef may be easily contaminated with harmful strains of E. coli.

Produce is a primary concern because of the ease to which it can be contaminated in the field, difficulties in effectively washing the product and the fact that it is often consumed raw.

Conclusion
The public often associates any E. coli with deadly infections and organ failure. In fact, most E. coli can be found living harmlessly–and even beneficially–in nearly everyone’s stomach.

E. coli has been used as an identifier for possible fecal contamination, however, due to ease and quickness of testing for its presence. Because of the link to fecal presence and quick laboratory identification it has become a very low cost and accurate testing means for identification of water treatment issues.

This is not only for raw water, but also water treatment plant problems and cross connection indicators.  In addition, a positive result does not indicate a disease-causing organism is present but rather that fecal contamination may have occurred.

Finding E. coli in water indicates a potential problem with the supply and the need for treatment with disinfectants or a boil water order in the community. Overall, the bacterium is a poor indicator of water quality, given that outbreaks occur in the absence of E. coli.

We typically recommend home well owners test their water, and where some have hits for bacteria (like HPC’s) that is less alarming (but still need to be addressed), however if there is a hit for fecal bacteria (aka E. coli) we are very quick to act on further investigation of the well, location in conjunction to a septic field, and significant attention to chlorination or UV usage.  It is a significant indicator of something more.