Prompted by the discovery that nanoparticles can enter the human body and accumulate in the environment, government agencies have begun to manage research of ‘nanotoxicology.’ 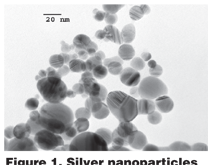 In 1959, Professor Richard P. Feynman unveiled the revolutionary concept of nanotechnology in his lecture titled, There’s Plenty of Room at the Bottom. By focusing on fabricating matter of roughly one to 100 nanometers, scientists have been able to observe and induce a number of unique physical phenomena that occur only at the nanometer scale.

Now, almost 50 years later, medical and engineering researchers have manipulated these unique processes to enable novel applications in consumer products. Blinded by its efficiency and the ‘nanorevolution,’ both the industrial producers and the consumers have overlooked the potential water environment consequences. However, with over 500 nanoproducts circulating in the consumer market, the potential environmental detriments of this $3 trillion (USD) industry are unavoidable.

Risks of nanotechnology
Despite the modern success of nanotechnology, the potential health and environmental risks associated with these applications remain unknown. Prompted by the discovery that nanoparticles can enter the human body and accumulate in the environment, government agencies have begun to manage research of ‘nanotoxicology.’

In September 2006, the National Nanotechnology Initiative reported the intent to research methods to evaluate the toxicity of nanoparticles to the environment and the human body. This critical information need is also the primary focus of the US EPA with regards to nanotechnology. Due to the overabundance of silver nanoparticles in the consumer market, ‘nanosilver’ has become a specific area of interest among research scientists (Figure 1, Novacentrix, 2006).

There are two prominent hypotheses for the nanosilver antimicrobial abilities. In the first hypothesis, the presence of the silver ions around the negative colloid inactivates the proton motive force, leading to the rupturing of the live cell (

In the second hypothesis, the silver ions diffuse across the membrane of the colloid, changing the sulfhydrl groups, important in cell replication, to sulfur-silver groups (Figure 2b). Regardless of the methods of disinfection, the potential risks to the water environment remain unavoidable.

Nanosilver in our water
The concerns and potential consequences related to exposing nanosilver to our water environment through consumer products are tremendous. If exposed to the environment, silver nanoparticles may induce the death of bacteria that are surrogate environmental organisms and vital to all ecosystems.

Furthermore, the accumulation of nanosilver in the water environment may have an adverse effect on the aquatic organisms that inhabit the polluted areas. Current research has shown that zebrafish embryos exposed to nanosilver result in delayed development, defective fetal maturation and death.

The most detrimental effect of silver nanoparticles would be our efforts in recycling water in the wastewater industry. Several strains of bacteria are implemented in wastewater treatment to digest the organic substances present in the sludge. However, an accumulation of nanosilver in the wastewater will target and kill the bacteria present to digest the organic substances. As a result, the quality of the recycled water will be heavily reduced.

Procedures
This investigation sought to develop a novel technique to quantify bacterial toxicity of silver nanoparticles and to determine the reliability of nanosilver consumer products. As a result, the study was divided into three phases: preliminary, quantification and application.

Preliminary Phase
The objective of the preliminary phase was to validate the technique and optimize conditions for the bacterial toxicity assay. Two factors were variable: particle concentration and interaction time of the bacteria and silver particles. Pseudomonas putida, a gram-negative bacterium, was used as the representative microorganism.

A bacterial suspension of P. putida was exposed to a silver nanoparticle suspension for times varying between one and 24 hours. After each interaction time, each sample was stained with a 1:1 ratio of SYTO-9 (stains live cells, green fluorescence) and Propidium Iodide (stains dead cells, red fluorescence). Fluorescence microscopy was conducted and the number of live and dead cells was manually counted (Figure 3).

Each of the 96 wells modeled an independent simulation of the interaction between the silver nanoparticles, or silver ions, and the model environmental bacteria. Both gram-negative (P. putida) and gram-positive (Bacillus subtilis) were used; 12 concentrations by mass, increasing from 0.01-nM to 1.0-M, were tested.

After thee-hour interaction period, each well was stained with a 1:1 ratio of SYTO-9 to Propidium Iodide. Each well was measured for the red and green fluorescence intensity. The quotient of the green to red fluorescence gave a respective live-to-dead cell ratio. This ratio was then related to a percentage of dead cells: Percentage of dead cells (% DC) = (11.0 – LDratio)/ 0.1037 which was then used to quantify toxicity: Toxicity (%) = (% DC, experimental) – (% DC, control)

Application Phase
In addition to developing a technique to quantify toxicity, another main objective of this study was to determine how reliable a consumer product was in terms of the risk of exposing silver nanoparticles to the environment and/or the human body. To show the practicality of the novel technique developed in the Quantification Phase, a generic water filtration system modeled after conventional water treatment processes was engineered. 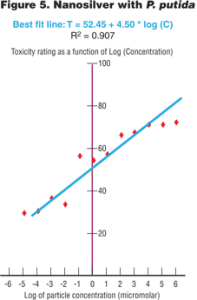 A logarithmic association was observed between toxicity and particle concentration (in micromolar). To gain a better perspective of the association, the data was linearized (Figure 5).

Figures 5 and 6 show that the silver nanoparticles and the silver ions have induced the same toxic effects in P. putida in the same period of time. The same trend was found in the induced toxicity of B. subtilis (not shown). 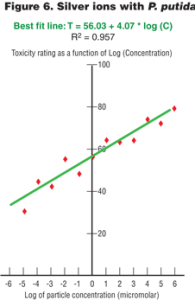 How reliable are the consumer products?
According to the third phase of this study, consumer products are not reliable at all. Adding silver nanoparticles to the filtration system increased the efficiency of water purification; the turbidity was reduced by over 80 percent. Prior to filtration, the water had a bacterial toxicity of approximately 14.8 percent. However, the bacterial toxicity assay showed a residual toxicity of approximately 12.46 percent. 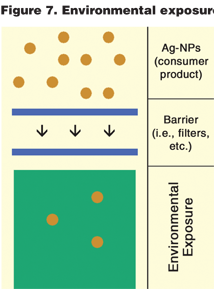 Avoiding the silver lining
The results of this study discourage the further use and distribution of nanosilver consumer products. Despite their high efficiency, silver nanoparticles are even more toxic than silver ions and have more detrimental potential consequences.

About the Author
Joyce S. Chai is the recipient of the 2008 Stockholm Junior Water Prize, and this exclusive article to WC&P contains excerpts from her prize-winning article, initially published by The Journal of the US Stockholm Water Prize. Chai became interested in water research after Hurricane Katrina and began taking a science research class in her sophomore year at Palos Verdes Peninsula High School in California. For the past two years, she has worked at the University of California, Los Angeles in the Water Quality Research Laboratory in the Department of Civil and Environmental Engineering under the supervision of Dr. Eric M.V. Hoek. In the fall of 2008, she began her education at Stanford University, working for an undergraduate degree in Chemical or Environmental Engineering. She can be reached by phone: (310) 748-2405 or email at chai.js@gmail.com.