POU reverse osmosis (RO) systems continue to grow in popularity with consumers in many regions, including North America and especially in Asia. Large markets and channels include many big box stores in the US, and by water treatment dealers in the US, parts of Europe, the Middle East and Asia.

RO was initially developed in the late 1950s. By the 1980s, its use in residential water treatment was becoming established. RO began to gain substantive consumer acceptance with the development of automatic shut-off valves and the adoption of NSF/ANSI 58 – Reverse Osmosis Drinking Water Systems in 1981.Because of the uniqueness and special requirements of the technology, POU RO systems consist of a number of components. These components typically include pre- and post-filters, reverse osmosis membranes, automatic shut-off valves, product water storage tanks, and faucets. This combination of components working together provides sophisticated water treatment capabilities. 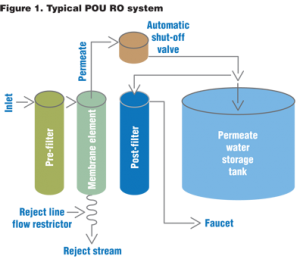 See Figure 1 for a diagram of a typical POU RO system.

As with other technologies and NSF/ANSI DWTU Standards for POU/POE systems, the test methodology developed for evaluation of contaminant reduction capabilities of POU RO systems is based closely on the nature of the technology. It is essential that the test method be reviewed, which includes the rationale and philosophy considered by the NSF Joint Committee on Drinking Water Treatment Units to support the methods.

Ionic Rejection
RO membranes allow water to pass through, but reject ionic contaminants dissolved in the water. The efficiency of rejection depends on several factors: the membrane itself, the net driving pressure of the RO system, the amount of crossflow (i.e., the recovery), the electrical charge of the ions, the size of the ions, water temperature, water chemistry and other factors.

Ionic rejection is the fundamental function of reverse osmosis systems. For this reason, NSF/ANSI 58 requires that all systems must be evaluated for basic ability to reject ions. Test water containing 750 mg/L sodium chloride in deionized water is used for this evaluation.

Sodium chloride is used because sodium is monovalent (Na+), as is chloride (Cl–), when dissolved and dissociated in water. Also, the ions are relatively small in ionic size when compared to other ions such as calcium (Ca2+) and sulfate (SO42-). The use of sodium chloride, which yields small, monovalent ions, results in a test that gives a conservative indication of ionic rejection by the RO system. This basic evaluation test with deionized water containing only sodium chloride is known TDS reduction. All RO systems conforming to Standard 58 must demonstrate at least 75 percent reduction of TDS when tested.

The TDS Reduction Test Protocol
RO membranes are durable when protected appropriately by prefilters. They can last for several years. This long life makes testing an RO system through the entire replacement cycle of the membrane impractical.

Because of the impracticality of testing RO systems through the entire life cycle of the membrane, they are instead tested according to a seven-day protocol that evaluates system performance under a variety of usage patterns. Complete tank draws, partial tank draws and a stagnation period are evaluated through 14 different sample points over the course of the week-long protocol. 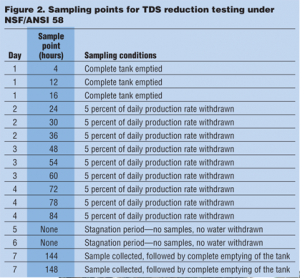 For details on the sampling protocol, see Figure 2. For systems that do not include a storage tank, the protocol is similar. For a photo of a typical RO system on the test stand, see Figure 3. 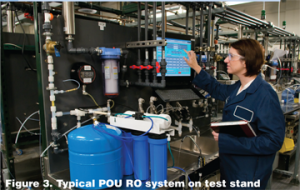 Prefilters are essential in protecting the RO membrane in order to isolate performance of the membrane during testing. But all pre- and postfilters need to be removed during TDS reduction testing.

The system production rate is measured under two different conditions; one is when filling the storage tank completely and the other is when filling a tank from the point where the automatic shut-off valve first turns on.

The daily production rate is an average value based on these two operational conditions, expressed as volume per day (volume per 24 hours). For systems that do not include a storage tank, the procedure is similar.

The technology influences the test methods
The NSF Joint Committee on Drinking Water Treatment Units recognizes the unique capabilities, growing popularity and special requirements of RO. They have used this recognition to specifically design the test protocols in Standard 58 to challenge the technology.

By setting specific pressures, operational requirements, product configurations and sampling schemes, the protocols create conservative tests of these systems. These tests verify their performance and help ensure quality RO systems for a growing number of consumers around the world.