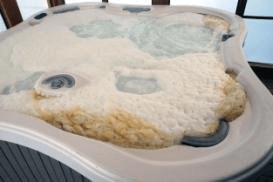 Most bacteria thrive in an aqueous environment. A natural balance between bacteria and other living organisms exists in water, just as it does in our bodies.

Pristine lakes, untouched by modern human activities, have low levels of planktonic bacteria and don’t generally cause disease when animals or humans drink their water. The lakes of the Boundary Waters in northern Minnesota and southern Ontario, Canada are perfect examples.

Drinking from these lakes is generally safe as long as you are away from shore (along the shore, Giardia parasites often thrive; these can cause severe diarrhea). Huge bogs containing sphagnum moss are one of the biologic systems that keep this water pristine and in balance. In contrast, if that same lake was located in the middle of human habitation, we might quickly have a significant problem unless the lake was carefully monitored and managed.

Combine people, heat and an isolated and stagnant body of water and you may have the ideal environment for bacteria to grow. Water provides the medium, people’s skin and bodily secretions provide both bacteria and the nutrients to feed them and warmth increases the bacteria’s proliferation rate. Within a very short period of time the bacterial count can rise to a potentially dangerous level, depending on the specific organism.

To control this biologic process, we usually try to kill bacteria with chemical disinfectants such as chlorine, bromine or iodine. These oxidizers kill bacteria very efficiently, but only if bacteria are suspended in the water—not when they are attached to surfaces. In fact, most of our water treatment schemes work only on suspended bacteria.

What is biofilm?
Recent research shows that almost all types of bacteria form colonies—microscopic neighborhoods—on any surface that is in contact with water. These colonies are known as biofilm.

Imagine a coral reef: a colony of billions of tiny sea creatures that make their home by secreting a material that hardens into a rock-like structure. Take this coral reef and make it microscopic, replacing the coral animals with bacteria and you have biofilm. Whenever bacteria, water and a surface are combined, the bacteria migrate to the surface and set up housekeeping.

These colonies are quite complex in design. The first bacteria that adhere to the surface produce and secrete a sticky matrix of complex sugar molecules that also incorporates proteins, nucleic acids and other compounds from the immediate environment. Just like coral, this substance protects the bacteria from attack by chemicals or other agents that can destroy them. Sheltered by this biofilm, they divide and increase their colony size as long as they have sufficient nutrients and enough fluid flow to remove their waste products.

As bacteria grow, the biofilm colony expands. Eventually, it develops a complex array of channels (functionally similar to our blood vessels) that bring nutrients closer to the cells and more efficiently remove waste products. Biofilm colonies also share information among their members to enhance survival in the face of attack, reduced nutrient levels or desiccation of their fluid environment. Small pieces of biofilm sometimes break off and float away to begin a new colony. Individual bacteria can also break free and establish new biofilm neighborhoods on other surfaces.

A spa has all the requirements for biofilm formation. It contains water and people (and occasionally dogs) who get into the water, thus providing bacteria and nutrients as the water is heated to a cozy 95 to 100°F (35 to 37.8°C). Bacteria divide prodigiously in warm temperatures, so they quickly establish themselves and start to create a biofilm on every water-covered surface of the spa.

Controlling biofilm formation
To try to control this bacterial growth, we typically use chlorine, bromine or other chemicals that kill bacteria on contact. These chemicals are efficient killers of bacteria swimming free in the water. But we now know that they are not very effective against the bacteria in biofilm.

Recent research from the Center for Biofilm Engineering at Montana State University showed that the biofilm matrix absorbs chlorine, bromine and other reactive ions into the sticky molecular matrix that covers the living bacteria. The ions may kill the bacteria closest to the surface, but billions of bacteria remain unharmed in the depths of the biofilm. These bacteria also quickly divide to replace the ones killed by the chemicals. 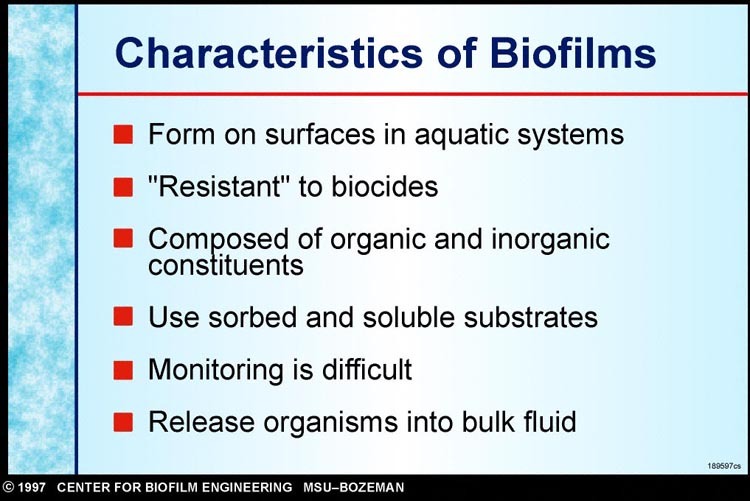 Anyone who owns a spa knows how difficult it is to keep it sanitary—or to keep chlorine or bromine levels stable over time. The problem is that sanitizing chemicals don’t deeply penetrate the biofilm or kill most of the bacteria within it.

Over time, this creates a sort of chemical soup of odiferous, foaming and unclear water. This is why spa manufacturers recommend completely draining and refilling most spas every three months. Unfortunately, doing so can be both time consuming and unpleasant.

Draining a spa does nothing to kill or significantly harm the ever-growing biofilm, which remains largely stuck to the surface of the spa. Even if the spa is allowed to dry completely, persistor cells—bacteria at the bottom of the biofilm— respond by going into a dormant state.

They can remain in this suspended animation for years, waiting for a more hospitable environment to return. When the spa is refilled with water, bacteria come back to life, resume dividing and make more biofilm.

The positive effects of sphagnum moss
The problem of biofilm doesn’t just occur in spas, but in nearly every surface-fluid interface where bacteria exist. Wherever biofilm exists, a livable environment for many kinds of pathogens also exists underneath. Thus, biofilm can present a problem for industries and businesses. It also can present a health threat for human beings.

Yet nature has created an effective way to penetrate biofilm and reduce bacterial proliferation. These natural antibacterial properties are found in certain species of sphagnum moss, a plant that grows in bogs as a carpet of floating vegetation.

Sphagnum moss is a soft, leafy plant with small leaves and stems almost a foot long. It can be easily harvested and spontaneously regrows in three to five years, depending on the climate. It’s found in the higher latitudes of both the northern and southern hemispheres.1

The lakes in the Boundary Waters—and, more generally, in northern Minnesota, Wisconsin, Michigan and southern Ontario, Canada—all receive their water from huge expanses of bog that contain many species of sphagnum moss.

The correlation between the presence of this moss and the purity and healthfulness of the surrounding water did not escape the longtime inhabitants of these areas. In fact, several Native American tribes have long considered sphagnum moss sacred because of its healing properties.2 For centuries they used it to pack wounds to aid in healing. They also used it as a natural diaper for babies.

Later, explorers from northern Europe used this moss to keep food from spoiling and to keep drinking water fresh.3,4 In fact, sphagnum moss is what allowed the Vikings to travel to Iceland, Greenland and North America by preserving their food and water during long ocean voyages.

Once antibiotics, refrigerants and other modern forms of healing and preservation were discovered, however, the remarkable effects of sphagnum moss were largely forgotten. 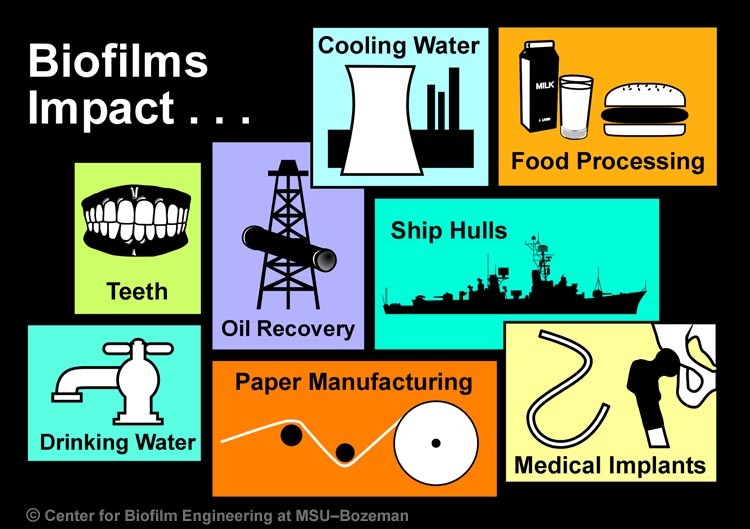 History, nature and science converged a few years ago on a flight from Frankfurt to Minneapolis. While reading Atlantic Monthly, I encountered an article about sphagnum moss and its uses in treating wounds in World War I.

That article piqued my interest. Typically, soldiers in the trenches would get their flesh torn apart by bullets and mortars. Since these were the days before antibiotics, most of these wounds would quickly get infected as biofilm formed over the dead tissue, protecting the rapidly growing bacteria underneath.

We now know that most wounds that won’t heal involve bacteria being protected by biofilm. And doctors, nurses and medics discovered that packing sphagnum moss inside wound dressings significantly increased the survival rates of soldiers with large, gaping blast wounds.5,6 The only explanation could be that the moss somehow inhibited bacterial growth.

To investigate this theory, sphagnum moss was obtained from northern Minnesota and tested against various types of bacteria in conditions that cause bacteria to divide at very high rates. Primary results in each case indicated the moss significantly decreases bacterial growth

There are hundreds of species of sphagnum moss. Yet not all types of the moss have this property. After years of testing, we were able to identify two species with the highest antibacterial activity.

Small and large-scale potential
The potential value of sphagnum moss for pool and spa owners is quite significant. Because it reduces the proliferation of bacteria, it helps keep the water clear and clean; there is no foaming, no discoloration, no smell and no taste.

The moss also keeps water pH stable at 7.4. Further, water treated with moss typically requires only 20 to 30 percent of the chlorine or bromine it would otherwise need. As a result, spa and pool owners would not need to change the water as often and may only need to change water in a moss-filtered spa once a year.

Other potential applications for sphagnum moss include home water conditioning systems and industrial and municipal water purification systems. Work is underway to develop these and other uses of this remarkable plant to maintain the delicate bacterial balance in the water we use.

Interestingly, some other commercial applications of sphagnum moss already exist. The plant is commercially harvested in Wisconsin, New Zealand, Scandinavia and Chile, though currently it is primarily used by the flower industry to promote germination.

As its potential in water conditioning and purification is realized, we can expect to see the cultivation, harvesting and marketing of sphagnum moss to become an industry of its own.

About the authors
David Knighton, M.D., ‘rediscovered’ the impacts of sphagnum moss on water environments, both natural and human-made. A former trauma surgeon, vascular surgeon and wound-healing scientist, Dr. Knighton is a leading expert on wound healing and co-founder and Chairman of the Board of Creative Water Solutions, LLC. Along with his business partner, microbiologist Vance Fiegel, they operate the research lab based in Minneapolis, MN, which holds numerous medical device and process patents. Vance Fiegel did microbiological research at the University of Minnesota for nine years after earning his Bachelor of Science degree in biology. Fiegel has been associated with Dr. Knighton since 1984, when his innovative research in wound healing led to studies of vein harvesting techniques for heart bypass surgery and orthopedics. This led to the formation of Embro Corporation and Embro Vascular, where he currently serves as President and COO as well as Chief Scientific Officer for Creative Water Solutions.

About the corporation
Embro Corporation and its staff tested this hypothesis. The detailed results can’t be published at this time, as they are part of Embro’s current patent applications. For the same reason, this research has not yet been peer reviewed.