Century EcoWater celebrated 50 years of water treatment service last month in Monroe, WI. The company is located in an old gas station built in 1927 and now listed on the National Register of Historic Places.

Following a new Associated Press (AP) report that shows at least 46 million Americans may have pharmaceuticals in their water, WQA is encouraging consumers to educate themselves on possible solutions. According to the report, almost one in six Americans may be affected by pharmaceuticals in their household water. Since an initial AP report in March, positive tests were reported in 17 areas, including Reno, NV; Savannah, GA; Colorado Springs, CO and Huntsville, AL. Results are pending in three other areas.

Everpure in the news

Everpure, LLC announced a new distribution partnership with Purcell Murray Company, effective in September. Purcell Murray will be a Master Distributor for the Everpure residential product line to all dealers, wholesalers, architects, as well as builders and developers in Arizona, California and Nevada.

During the Republican National Convention, Everpure provided the entire event with its Water Bar stations, serving water filtered on-site in an effort to promote a healthy return to the tap. The company stepped in to draw attention to the environmental concerns over bottled water, while illustrating the benefits of filtered water from the tap to support Minneapolis, MN Mayor R.T. Rybak’s stance against bottled water. 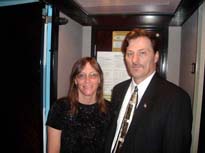 Nelsen Corporation announced Budget Water of Pittsburgh, PA as the winner of the Las Vegas vacation, the second of three to be given away during its Water. It’s Our Life! Vacation Sweepstakes. Budget Water owner Jerry ‘Dallas’ Kelley and his wife will enjoy luxury accommodations, tickets to two shows plus $1,000 (USD) while in Las Vegas, NV. The third and final drawing will be held December 1. Winners will enjoy a 12-day land and sea escape to Alaska! For complete rules and regulations, call 800-362-9686 or visit www.nelsencorp.com/2008-rules.pdf

The company announced that by Sept. 1, 2009, it will no longer provide bottled water at its major facilities. It will instead provide premium water filtered by the company’s Everpure systems for employees. The conversion plan will eliminate all company-provided bottles at its largest facilities.

The Genesis 3 Design Group will offer a series of educational classes and special events in conjunction with the 2008 Int’l Pool | Spa | Patio Expo, November 18-20, at the Mandalay Bay Convention Center in Las Vegas, NV. The company will also sponsor 12 seminars that make up the show’s core educational program.

Doss stated, “Bottled water is a safe, convenient, healthful packaged beverage product that consumers find refreshing and use to stay hydrated. In many instances, consumers choose bottled water because it does not have the calories, caffeine, or other ingredients that they may wish to eliminate or moderate in their diets. And with the rise in obesity and diabetes in the United States, any actions that discourage the consumption of bottled water are not in the public interest.”

Members of the Total Coliform Rule/Distribution System Advisory Committee signed an agreement in principle that recommends revisions to the 1989 Total Coliform Rule and research and information collection needed to better understand potential public health impacts from conditions in the distribution system and control microbial drinking water contamination. Revisions to the rule will require systems with positive total coliform E. coli monitoring results to conduct an assessment to identify whether a sanitary defect is present and to correct defects found.

The Fillmore, CA, City Council approved a water softener buy-back program in August to encourage owners of brine-discharging softeners to relinquish their devices. The program would pay water softener owners $500 to $750 (USD) to disconnect and remove the devices. Owners would also be granted amnesty for voluntarily reporting the softeners, all but 50 of which are illegal to operate in the city. The Council did not approve the use of vouchers to be issued after $50,000 (USD) budgeted for the program runs out.

Grants ranging from $2,500 to $5,000 (USD) are now available to not-for-profit organizations and educational institutions capable of offering overnight or day camp experiences in summer 2009 to introduce 12- to 16-year olds to careers in manufacturing and engineering. The grants are a collaborative effort between the Fabricators & Manufacturers Association Foundation (FMAF) and the Nuts, Bolts and Thingamajigs Foundation (NBTF). Application deadline is December 12. Call (888) 394-4362 or email foundation@fmanet.org for more information.

The National Academies released Drinking Water: Understanding the Science and Policy Behind a Critical Resource, a free booklet designed to give the public a comprehensive introduction to drinking water issues. Download a free copy from www.nationalacademies.org/morenews/20080828.html.

For the sixth year, Charity Navigator has given Water For People its highest four-star rating for sound fiscal management and the ability to effectively manage and grow its resources, based on its 2007 financial performance. The organization and ITT have teamed up to offer a series of videos on water and sanitation that were presented at the IWA World Water Congress. Visit www.watermarkdiscussions.com for more information.

According to the South Florida Business Journal, Miami entrepreneur Carlos Fernandez is the first Florida owner of Ecowash Mobile, an Australian franchisor. The new waterless car wash technique uses a special polymer lubricant to lift and encapsulate dirt then remove it with a soft cloth. The company says the polymer leaves a protective coating on the car’s surface that lasts for up to six weeks.

University of Guelph scientists believe they’ve uncovered a promising treatment for one of the world’s most common water-borne diseases. They discovered that an antibody used to detect Cryptosporidium parvum can also be used to fight off the bug itself. The findings of co-authors Professor Jack Trevors and Professor Hung Lee were reported in the microbiology journal Antonie van Leeuwenhoek.

EcoWater Canada announced the successful completion of the first RO cartridge recycling pilot program, launched in eight Canadian regions, according to Business Wire. Due to this success, the company will expand the participation to all of its dealers and will continue to promote a National Consumer awareness program to educate consumers about the benefits of RO drinking water and the importance of the recycling program.

GE Water & Process Technologies officially opened an expansion to its production facilities in Sorocaba, São Paulo, Brazil to assemble RO equipment. Previously, most advanced water filtration systems were imported from the US. The company expects to accelerate delivery times by up to 60 percent and provide system solutions to meet local needs. Latin American demand for its technology is expected to increase by 25 percent over the next three-year period.

The European Water Treatment Association (EWTA), launched during Aquatech Amsterdam 2008, will represent the residential and commercial POE/POU water treatment industry for the EU. Membership is open to any company, institution, association or body engaged in the European water treatment industry. The association’s agenda, set by the membership, will promote product value and public perception as well as defending members’ interests against regulatory and prejudicial threats.

LANXESS AG increased prices worldwide for synthetic rubber grades effective September 1. The prices per metric ton are up to $300 (USD) for Buna EP (EPDM), up to $440 (USD) for Perbunan/Krynac (NBR) and up to $2,200 (USD) for Therban (HNBR). Price adjustment for Baypren (CR) was set at up to $250 (USD) per metric ton in Europe, Middle East regions and Latin America.

The International Water Association’s (IWA) World Water Congress set new participation precedents in mastering the challenges faced in water supply and sanitation. Widespread consensus was reached on pressing issues, best practices were shared on a global scale and good progress was made in driving research into practice. Over 4,500 visitors from 94 different countries visited the four-day conference held in Vienna, Austria in September.

Water 21, the organization’s news publication and Aquatech have agreeed to cooperate on Aquatech Amsterdam, Aquatech China and WQA Aquatech USA. Water21 will prepare the exhibition daily newspaper for the Amsterdam event and provide news content for Aquatech’s event portal. The publication was also designated as the Preferred Global Media Partner

The maxit Group, Norway, will supply Filtralite® filter media to Quadrimex in France for refurbishment of Joinville Water Treatment Works, Paris. Delivery of approximately 1,600 m3 (56,503 ft3) of product began in September and should be completed by the end of the year. The treatment plant utilizes water from the River Marne and is designed to supply up to 300,000 m3 (10.5 million ft3) of drinking water per day.

Magnets ruled out in Japan

Japan’s National Consumer Affairs Center has produced a study that says magnets have no significant role in treating water, according to Water 21. The center tested six models that clamed to reduce residual chlorine and trihalomethanes and found that the quantities in water remained unchanged after using the device.

According to PR-inside.com, coconut industry stakeholders in southern Mindanao are urging the government to promote massive salt farming nationwide in a strategic move to increase salt production in the Philippines. The Philippine Coconut Authority (PCA) proved years ago that salt (sodium chloride or common table salt) is the cheapest and one of the most effective and readily available organic fertilizers for coconuts. Coconut’s many uses include copra oil, activated carbon, coco fiber and peat, coco water health drinks, handicrafts and emerging biodiesel applications.