The scenic Silverado Resort in the Napa and Sonoma Valley of California was the site of the 2008 WQA Mid-Year Leadership Conference September 10-12. Over 100 people were in attendance to take part in the committee and task force meetings, industry section meetings, social events and scenic tours of the local wineries.

State of the industry luncheon
Current WQA President Doug White and WQA Executive Director Peter Censky addressed the heavily attended State of the Industry Luncheon. Both gave the perspective that the organization will continue to expand to an industrial focus as well as that of a residential organization, and that this focus will continue to grow globally to address growing world consideration.

They both noted that serious focus will continue on banning, regulation and legislative threats to the water treatment industry, such as California’s AB 2270 and the Phoenix Project efforts. And Censky noted the organization would also make a concerted effort to review improved communications to the various segments of the industry.

“This was a great session and it provides hope for a solid 2009 WQA Aquatech USA event, planned for March 17-21, 2009 at the Rosemont Horizon in suburban Chicago,” says Censky. “And it sets the stage for what we hope will be strong attendance and trade show support at the 2009 event.

“It was a much more intense Mid-Year than in the past due to the legislative battles that will heat up more and more in the future. And we are continuing to research such growing areas as lifecycle, ion exchange and onsite waste for the future of our industry.”

Most reinstatements occurred due to extensive efforts by WQA through phone and email contact. For international members, email proved the best contact method and higher rate of reinstatement. The number of dealer members has increased; manufacturer memberships declined slightly, in part due to consolidation of businesses.

WQA’s three-year promotional campaign, Why It’s Important to Be A Member, has been well received. In its second year, the testimonial-based campaign has proven successful enough to be focused for the industrial segment.

The Membership and Marketing Task Force also is working on a reciprocal agreement program wherein regional WQAs would offer a complimentary full-conference package for new members. And the Regional Associations Task Force met to brainstorm on trade shows and seminars, as well as state and regional membership issues.

The Industrial Section met to discuss and further review a “speed dating-style” networking forum. This is being planned for the 2009 WQA Aquatech USA event.

The Dealer Section Meeting held a discussion session on dealing with employee theft, as well as brainstormed ideas for future education and training sessions. And the Manufacturer/Supplier Section and Retail Channel Section held a session on magnetic and ion exchange benefits.

Golf fundraiser and Benefit Dinner
Major fundraising for the WQRF comes from the annual golf tournament and corresponding Benefit Dinner. Nearly 30 golfers participated on both the north and south courses of beautiful Silverado Country Club, with awards being presented at the evening Benefit Dinner, where nearly 80 people were in attendance.

The winning team carded an eight under par 64. The winning team included Doug Horner and Mike Mormino of Enpress, LLC in Eastlake, OH, along with Shawn Talley of Pentair Water in Brookfield, WI, and Dar Watts of American Aqua Incorporated in Saline, MI.

Closest to the pin on the south course honors went to John Packard of Culligan Water Conditioning in Minnetonka, MN. Regu Regunathan of ReguNathan & Associates in Wheaton, IL captured the closest to the pin honors on the north course. 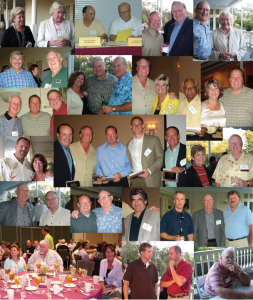