All water treatment is the process of removing (or reducing) contaminants from water. The intended use of the product water determines the type of treatment technology as well as the resulting quality. Whether the requirement is to treat a municipal or individual well water supply coming into a plant, or wastewater leaving the plant, is immaterial; the goal is to remove some (or most) of certain (or all) of the contaminants in that particular water stream. It is possible to group all the contaminants in five specific classes, as indicated in Table 1. 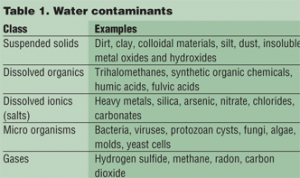 Over the years, a plethora of treatment technologies have been developed for contaminant reduction and Table 2 identifies those that are appropriate for which contaminant class. Since removal of gaseous contaminants is not a major requirement in most water treatment activities, it is omitted from Table 2. 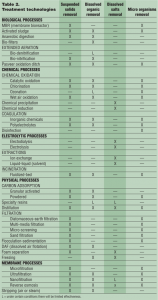 Water supply and demand
According to the World Health Organization, around the world, 1.1 billion people do not have access to safe drinking water and 2.6 billion are without adequate sanitation facilities. Every day, nearly 6,000 people who share our planet die from water-related illnesses and the vast majority are children.

Interestingly, the total volume of water on this planet has remained largely unchanged for millions of years—since the compound was first formed. Certain chemical reactions create water, such as those taking place in internal combustion engines; however, water is also consumed in other chemical reactions and small quantities of water vapor leak into the upper atmosphere and are lost to outer space.

On the Earth, 97 percent of the water is seawater and of the remaining three percent, two-thirds is currently frozen as ice caps, glaciers and permanent snow. What is left is found in a variety of locations: over 98 percent of this fresh water is groundwater; 1.5 percent lake water; less than 0.02 percent is river water and even less is atmospheric water.

Besides population growth, other factors that have contributed to this shortage include:

One major difference is that in water purification there is usually little emphasis on trying to treat every drop of water, whereas in wastewater treatment, the generator of these streams is inclined to concentrate the waste components into as small a volume as possible (to simplify discharge or treatment), thereby recovering a high percentage of the treated water which can be reused.

The requirement for system designers is to be experienced and knowledgeable enough with the plethora of choices to make an intelligent decision regarding which to select for additional investigation and possibly further testing for the particular wastewater stream.

Treatment technologies
Fortunately, most of the technologies now used for raw water treatment are also excellent candidates for wastewater reuse applications. A general description of these follows:

Filtration
This technology is primarily utilized to remove suspended solids from any water supply. These solids can be dirt, silt or other particulate material that may interfere with the intended use of the water or a downstream treatment technology. Filtration technologies include:

Bed filters. A tank containing granular media such as sand, anthracite, garnet, etc. that captures suspended solids and retain them inside the bed until taken offline and backwashed. Bed filters are typically capable of removing suspended solids down to 10-20 microns in size.

Cartridge filters. Operating in the same way as bed filters, cartridge filters are replaceable ‘inserts’ (usually cylindrical in configuration) that are inserted into housings and are typically replaced when they have captured so much suspended solids that the pressure drop across the housing becomes unacceptable (usually above 10 psig). Offered in many different designs and micron removal ratings (down into the submicron range), they provide an excellent array of choices to the knowledgeable design engineer.
Bag filters. These are similar to cartridge filters except the medium is fabricated into a bag through which the water flows. Although not available with a micron rating as small as cartridge filters, bag filters are generally ‘tighter’ than bed filters. 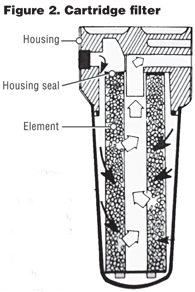 The four major pressure-driven crossflow membrane technologies in use today are microfiltration, ultrafiltration, nanofiltration and reverse osmosis, which utilize pressure as the driving force. These technologies behave differently than filters in that (with some exceptions) the feed stream is pumped at a high flow rate across the surface of the filter media (membrane), with a portion of this stream forced through the membrane to effect separation of the contaminants, producing a purified stream (permeate) with the concentrated contaminant remaining in the other stream (concentrate) which exits the membrane element on a continuous basis.

Microfiltration (MF) is utilized to remove submicron suspended materials on a continuous basis. The size range is from approximately 0.01 to one micron (100 to 10,000 angstroms). By definition, microfiltration does not remove dissolved materials. Microfiltration is illustrated in Figure 4. 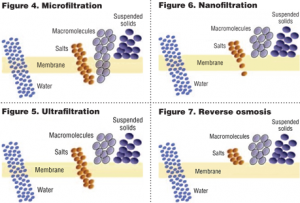 Nanofiltration (NF) can be considered ‘loose’ reverse osmosis. It rejects dissolved ionic contaminants but to a lesser degree than RO. NF membranes reject a higher percentage of multivalent salts than monovalent salts (for example, 99 percent versus 20 percent). These membranes have molecular weight cut-offs for non-ionic solids below 1,000 Daltons. Nanofiltration is illustrated in Figure 6.

Reverse osmosis (RO) produces the highest quality permeate of any pressure-driven membrane technology. Certain polymers will reject over 99 percent of all ionic solids and have molecular weight cut-offs in the range of 50 to 100 Daltons. Figure 7 illustrates reverse osmosis.

Probably the most technically challenging issue in wastewater reuse treatment is the effect of the high-contaminant concentrations on membrane system design. Highly concentrated suspended solids will increase the propensity for fouling—the bane of all membrane system operations.

Certain slightly soluble salts, such as the carbonate, sulfate and phosphate salts of calcium, may exceed their solubility limits and precipitate out.

As stated above, the range of possible contaminants found in a wastewater stream is virtually endless, from organic (including oils, greases and other immiscible compounds) to heavy metals to suspended materials such as glass, plastic and metal—contaminants in the wastewater from sewage, or various manufacturing and agricultural operations.

The degree to which contaminants are concentrated in membrane processing can be defined by the formula in Table 3 and illustrated in Figure 8. 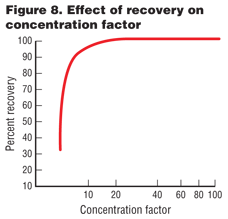 Membrane bioreactor technology (MBR)
The newest membrane technology and the most appropriate for wastewater streams with high organics loading is MBR.

The utilization of bacteria to degrade biological contaminants in water is perhaps the oldest and most widely used wastewater treatment technology. For example, virtually all municipal wastewater treatment plants take advantage of naturally occurring bacteria that break down sewage as part of their normal metabolic activity.

In actuality, there are two distinct biodegradation processes in use today:

Aerobic utilizes air to encourage the activity of aerobic bacteria, whereas, the anaerobic process uses another kind of bacteria which thrive in the absence of air.

The most common measurement of biological action is BOD (biochemical oxygen demand), the organic compounds that are oxidized by the metabolic activity of the bacteria.

The key to effective biodegradation processes is the creation and maintenance of a healthy population of thriving bacteria, known as the biomass. Typically, the biomass is either suspended in the wastewater in what is called a suspended-growth environment or attached to a surface, known as fixed-film.

Within the suspended-growth category there are a number of design options including:

MBR process
MBR is an offshoot of the suspended-growth concept and involves utilizing an MF or UF membrane to filter the treated water to remove particles, BOD and micro organisms. The permeate (treated effluent) is recovered and, if necessary, further purified with RO or another polishing process.

The concentrate (untreated) stream is returned to the bioremediation tank. Compared to other biological processes, MBR offers the following advantages:

The membrane device configurations most commonly used today are hollow (capillary) fiber and plate and frame, although tubular and spiral-wound devices are becoming more widely used.

The most common biological treatment is aerobic and, typically, air is bubbled into the treatment tank. A very popular approach is to immerse the membrane element in the treatment tank and either allow the hydrostatic head of the solution to provide the driving force or to use a pump to pull the permeate through the membrane (or both). Air bubbles are also directed over the surface of the membrane (air scouring) in an effort to reduce fouling.

Another design involves placing the membrane system external to the treatment tank and yet another uses a separate tank for membrane processing downstream of the biological treatment tank. Additional designs and configurations are sure to appear as MBR technology becomes more widely used. Figure 9 illustrates aerobic MBR applications for both ‘immersed’ and ‘external’ designs.

Conclusion
Water reuse is rapidly becoming a reality for all the reasons cited above; however, designing the most effective and economical system requires thorough, comprehensive testing of each plant’s wastewater stream by a competent, experienced engineering professional.

Peter S. Cartwright, President of Cartwright Consulting Company, of Minneapolis is a registered Professional Engineer in Minnesota. He has been in the water treatment industry since 1974, has authored over 125 articles, presented over 125 lectures in conferences around the world and has been awarded three patents. Cartwright has chaired several WQA committees and task forces and has received the organization’s Award of Merit. A member of WC&P Technical Review Committee since 1996, his expertise includes such high-technology separation processes as RO, UF, MF, UF electrodialysis, deionization, carbon adsorption, ozonation and distillation. Cartwright is also Technical Consultant to the Canadian Water Quality Association. He can be reached by phone (952) 854-4911; fax (952)854-6964; email [email protected] or on his website; www.cartwright-consulting.com.