Industry veteran and water industry pioneer Bill Fritzsche, a member of the Task Force and a driving proponent of the history project, responded to the Task Force presentation and update by simply saying “Wow!” 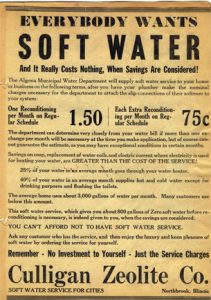 For many years, WQA members have expressed an interest in compiling a history of the industry, from the early years of Emmett J. Culligan to modern technology and everything in between. There was always willingness, but despite the best intentions of everyone, the project never quite seemed to get going.

At 2006 WQA Aquatech in Rosemont, IL, the idea again resurfaced and the call for action was taken up with zest. The WQA History Task Force was established, initially with Bob Ruhsdorfer at the helm, who later had to withdraw due to business demands.

WC&P Publisher Kurt Peterson enthusiastically supported the task force and accepted the Chairmanship of the project at the task force meeting held during 2007 WQA Aquatech in Orlando, FL. He offered the resources and archives of WC&P to help the project move forward.

Kurt returned from the conference with a clear focus on how the project would proceed. The 42-year old Publisher of WC&P (and son of founder Jerry Peterson) has over 20 years experience in the industry, having ‘cut his teeth’ in his parent’s company.

Managing Editor Denise Roberts was selected to head up the project internally, with the support of our entire editorial team. This was primarily due to her writing, graphic and computer experience, plus her great enthusiasm for the project. As an amateur genealogist, she readily recognized how important the project was from the very beginning.

WC&P archives are full of information and photos. Hundreds of photos of all sizes were reviewed and digitally scanned during 2007, using 1980 as the end point for the first step of the project’s timeline. Many were so old that the finish was beginning to degrade and they needed to be carefully handled for preservation.

Many more were poor in quality, primarily snapshots from personal cameras that were not always focused and colors had degraded over time. Less than 15 percent were properly labeled and identified.

After the photos were scanned, primarily in black and white, they were correspondingly resized, copyrighted, quality enhanced and where possible, identified. Approximately 1,500 photos were processed by the time Mid-Year and the next task force meeting in Nashville, TN was at hand.

WC&P’s editorial staff researched old magazine issues for caption information, working through 2007 to identify all but about 400 of the photos. Kurt and Sharon Peterson, the President of WC&P, greatly assisted by reviewing all unidentified photos and providing information about dates, places and people. Still, about 400 remained anonymous.

Mid-Year and Aquatech
A special presentation and update was prepared for Mid-Year. Slideshows were created that could be altered to random selection, which proved to be just the ticket for Kurt’s successfully received presentation.

Another presentation idea conceived at that time was developed and presented for the WQA Aquatech 2008 in Las Vegas, NV. A ‘History Wall’ was proposed and diligently assembled to identify the best photo prospects from our past.

Even photos as small as one-inch by one-inch were resized to 8 X 10 for easier viewing on the wall. Some of the photos included were ‘unknowns,’ some of which still remain unidentified. By this time, nearly 5,000 images had been scanned.

The beautiful ‘History Wall’ was very well received and was much discussed by many of the members who had been clamoring for their history to be memorialized. The reception was so good, the project will be presented at upcoming events with different photos in order to keep it fresh and appealing.

Next steps
Far more was needed and still is. During the 2008 annual convention, arrangements were made to interview and videotape several pioneers, veterans and current water industry professionals. Included were Bill Prior, Bill Fritzsche, Andy Fleckenstein, Curt Abendroth, Doug Oberhamer, Jeff Hillenbrand and Bret Tangley, to name just a few.

This video is being prepared for presentation on both the WC&P and WQA’s websites. These promising and delightful communications will add even more to the early history of the industry.

The WC&P editorial staff also developed a tremendous amount of text from throughout the early years of the industry and our publication to present in an electronic and print format. Meticulous line-by-line proofing was done on 137 pages of text; this process alone took almost as much time as scanning and identifying 5,000 photos!

Project Funding
All of the information researched and gathered to date was presented in a draft format to the History Project Task Force at the WQFA 2008 Mid-Year in Napa Valley, CA. Industry veteran and water industry pioneer Bill Fritzsche, a member of the Task Force and a driving proponent of the project history of the industry, responded to the Task Force presentation and project update by simply saying “Wow!”

A slide show of photos from 1959 to 1984 was displayed during the formal Task Force presentation at the WQRF Benefit Dinner event. Many of these had also been show in the previously prepared ‘History Wall.’ Bound sample copies of the historic research gathered to date were also available for review.

A co-presenter of the Task Force material with Denise Roberts at the dinner event, Fritzsche made an appeal for project funding. Most funding and nearly all the time contributions to date have been donated by Water Conditioning & Purification and personally by Ms. Roberts.

As future requirements will only expand, an immediate $30,000 is being sought to further the project, which will include additional photo and material gathering and preparation. Fritzsche encouraged all attendees to consider a minimum donation of $500 at this time.

Such a database and website concept will allow the full capturing, archiving and presentation of this information to the industry in a useable and indexable format, the details of which have yet to be determined by the committee.

These are among the several ideas that are still being discussed by the Task Force. And the next 25-year span through the present needs to be initiated, as time keeps marching on!

The industry is dynamic, even in the past!