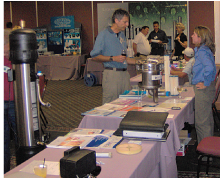 The 49th annual Colorado Water Quality Association was held September 19 through 21 at the Holiday Inn at Estes Park, Colorado. The organization met to elect board officers and conduct business while members and attendees also were able to participate in a vendor exhibition, attend CEU-focused education and training sessions and participate in social and fund-raising events.

John L. Rickert, CWS-VI at Kinetico Denver was re-elected as President. The rest of the re-elected board will consist of Vice President Eric Smith of Culligan of Brighton, Treasurer Skip Ruedeman of Clearwater Solutions in Lamar, Secretary Jeff Truesdall of Colorado Water Wizard in Boulder, Immediate Past President Larry Lewis of Pure Water Solutions in Castle Rock, and Board Members John Dittberner of JCD and Company in Madison, Nebraska, Mark Gomez in Ludlow, and Ray Zinsmaster of Better Water Company in Littleton. Gail Collins of Culligan of Brighton was also added to board.

At the formal board meeting, the success of this year’s session was discussed, as was a different locale being considered for next year. Estes Park has been the home of the convention for a number of years, but other venues are being investigated for the 2009/50th anniversary event. The September date will be maintained, pending the WQA Mid-Year date.

Rick Wray with Dewco Pumps gave a technical presentation on sizing and applications, while Chubb Michaud, CE, CWS-VI of Systematix, Inc. gave a presentation on arsenic water analysis. And Frank DeSilva of Resin Tech conducted a session on Colorado radium and uranium issues.

Golfers participated in a fundraising tournament at the Estes Park Golf Course. Golfers received a full mixture of Rocky Mountain weather, ranging from cloudy and chilly to sunny and warm throughout the afternoon, and even got a close-up view of two herds of elk lounging on the course. The silent auction at the vendor exhibition raised additional funds.

The winning team of Preston Short of Pro Products LLC, Jeff Huber of Pure Water Solutions, Joe Harrison of WQA and myself won the tournament. The group finished at 5 under par.

This foursome also captured two of the three golf awards, with Harrison getting one of the two closest to the pin honors (and coming awfully close to getting a hole in one) and myself winning the longest drive (which was overshadowed by a massive blow by Short that was unfortunately…for him… off the fairway). Frank DeSilva of ResinTech, Inc. won the other closest to the pin honor.

Efforts are underway for the organizations 50th anniversary Convention in 2009!